Kind of a lost day here in Havana as the lunch place we were going to had closed it’s dining room, the rumba place was crowded beyond belief, the temp hit 90+, and shows scheduled for 5pm were now to begin at 10!   Maybe.  But we had a private concert by a Cuban Flamenco guitarist Reymier Marino.

Ray has studied with a master, Paco de Luca, and is a well-known performer here on the island. He’s young and pretty darn good. Later it was dinner in a renovated cooking oil factory, el Cocinero, then next door to the massive arts complex, Fabrica. Here there were exhibitions tied into the design expo that is currently in Havana and we heard a performance by a jazz band featuring a scat singer. Actually the design show had more appeal. Here’s a really clever prototype – more Scandinavia than Havana looking – a fan made from discarded computer cooling fans. 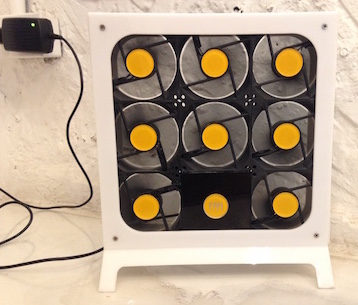 Reymier will be performing at a jazz club on Monday and we’ll try to catch a bit of that, as well as a funk band with a Latin twist at midnight. Till then here’s a pic of the politically correct street performed who taught his dog to snarl viciously when he hears the word, “Trump” 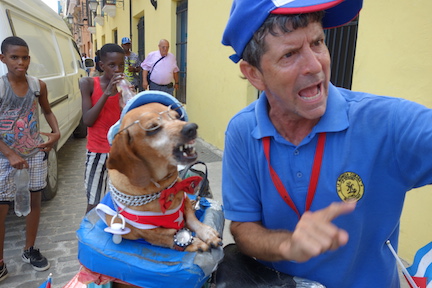