Los Tigres del Norte have been on our radar since 1990 when we got in the LP  ‘Para Adoloridos’ (uh, ‘For Shaking You Up’?).   These Californians are in the news this week as Juarez, the capital of Chihuahua State and a major city for drug trafficking and violence, has banned them from appearing.  The reason is their penning and performing so many ‘Narco Corridos’ – songs that offer a backhand glorification of the drugs trade.  As early as the 1970s this long-lived band were facing calls for censorship with the release of ‘Contrabando y Traición’ (1972, ‘Smuggling and Betrayal’) and ‘La Banda del Carro Rojo.’ 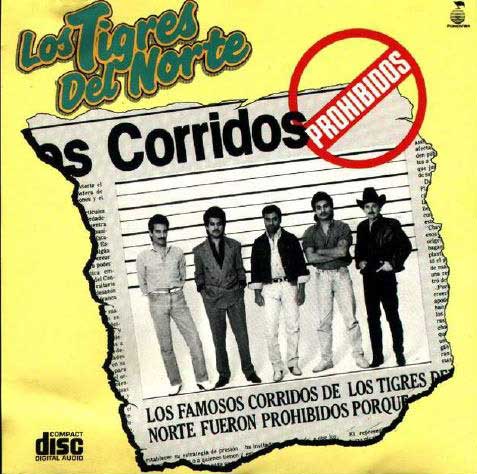 Corridos are story-songs chronicling outlaws, rebels, lovers, losers, heroes and villains, with roots in medieval Spain, new world Amerindian culture, and revolutionary fervor.  Only natural that one branch of these epic song cycles would touch on the latest wave of real hoods and Robin Hoods.

To get an idea of the genre have a look at the youtube video mix for ‘Corridos Prohibidos‘ (CD on the Fonovisa, USA label).  Along with a rogues gallery that acts as a warning label, there are beautiful prancing, dancing horses and a catalog of automatic weaponry, some firing so fast and so hot, the barrels catch fire.  Like Hollywood and Telemundo, the band likes to please their audience.

But little known is Los Tigres’ sterling academic contribution to popular music scholarship.  One of the best sites on the Internet is Frontera.  It is the brainchild of musicologist and Arhoolie label pioneer, Chris Stachwitz.  Chris has taken his exhaustive collection of Mexican and Mexican-American 78s and posted the history and music for us to enjoy with the help of UCLA.  And who paid for a great deal of this?  The Los Tigres del Norte Foundation.