7/21/21 – Those numbers sound pretty lucky to us.  And why?  Because today we finished sorting out the 12,721 items donated by Mr. Mark Jacobson.  But you can’t impress us with just a pile of lucky numbers – they gotta be prime and rare.  And they are.  This is, far and away, the best large collection ever donated to ARC since 1986 when we launched this ship with a van-sized donation from Jeep Holland.

Mr. Jacobson  (10/28/1946 – 8/5/2020)  ran the largest Toyota dealership in the Southeast.  Based in the Durham, North Carolina area Mark was famous for his lively car commercials, often holding his two beloved dogs, Elvis and Dylan.  But the dog’s names only hint at his love of music.

It took us a week to unpack and alphabetize box after box of wonderful LPs and 45s.  Close to ALL are mint, unplayed or sealed.  There’s 300+ LPs by Dylan, 300+ LPs by Hendrix, 300+ from The Beatles, 200+ by Elvis, 100+ by Bowie.  There are close to 50 each from about as diverse a group as you could imagine, from Blondie to Hawkwind to Them to Zappa.  How are so many possible?  Well, along with official releases and re-releases Mr. Jacobson went after the suitably obscure variations, including foreign issues, bootlegs, promotional releases, box sets, picture discs, all mono, stereo and Original Master versions, Quads, shaped records, signed LPs and limited editions.

You have no idea how great it is to unpack a collection with so few ordinary things.  All in all his passion for obscurata and completeness have greatly enriched the ARC and made all of us here smile.  Did I mention the 13th Floor Elevator’s first release, “The Psychedelic Sounds Of The 13th Floor Elevators” – International Artists IA LP-1 – Mono. Sealed. 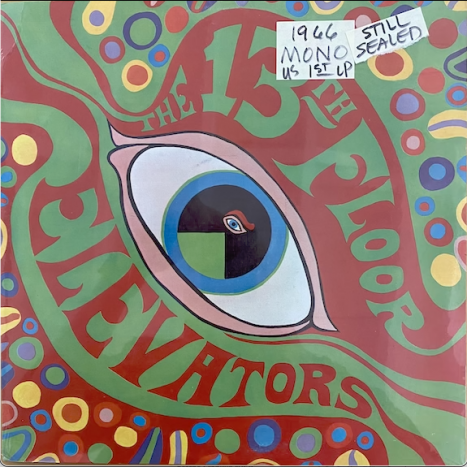 So thanks to Mr. Jacobson for his love of music and to his wife Rochelle who made the donation happen.  Also a big thanks to appraiser Stephen Braitman, family friend Don Moffett, Tom Gardner who helped Freddie with the pickup and Fred’s ol’ pal Leslie “Sunshine” Dunham who helped with the packing and wrote cool notes on the boxes.

Starting tomorrow look for postings of some of the covers on Instagram and maybe some other platforms.  With luck we’ll host an open house in the fall for all to see.  By that time we should have the Mark Jacobson Special Collection all catalogued.   That’s our goal.