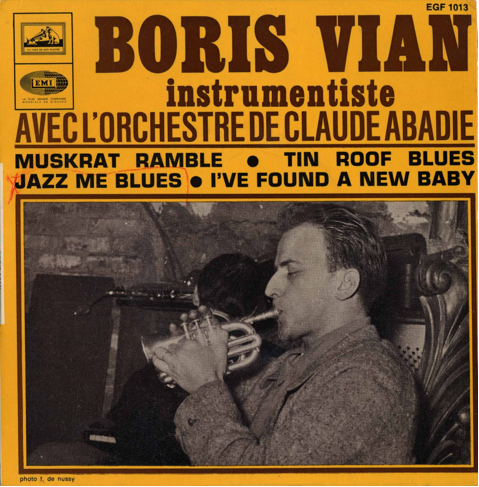 Vian identified enough with the outsiderness of the black man that James Baldwin, in The Devil Finds Work, says; “What informs Vian’s book, however, is not sexual fantasy, but rage and pain: that rage and pain which Vian (almost alone) was able to hear in the black American musicians, in the bars, dives, and cellars, of the Paris of those years… Vian would have known something of this from Faulkner, and from Richard Wright, and from Chester Himes, but he heard it in the music, and, indeed, he saw it in the streets.”

As the hipster concierge of postwar Paris, Vian welcomed the many visiting American musicians, artists and writers who were reshaping the city. He played trumpet and cut records in a formal Dixieland style a la Bix Beiderbecke, championing jazz and writing criticism for the magazines Le Jazz Hot and Paris Jazz. As factions squared off in the 50s, Vain acted as mediator between trad and bebop tribes. He wrote 10 novels, his best, L’Écume des Jours, the most infamous, Graves. Graves was France’s best seller of 1947, helped by being banned, and the sheer “luck” of being found at a grisly murder site, the scene in the book underlined and copied by the killer. Jours, from 1946 went from utter neglect in its time to one of Frances best selling works of the 20th century. He was Raymond Chandler’s French translator, and wrote regularly for the Sartre- de Beauvoir magazine, Les Temps Moderne. He collaborated with Darius Milhaud on the opera Fiesta, authored among his 400 or so songs a hit pop hit, “Le déserteur,” an anti war song of the Indochina era that enjoyed numerous covers and a resurgence during the Algerian occupation. Serge Gainsbourge cites a stage performance as inspiration to launch a songwriting career.

The single above is workmanlike. Nice sleeve. For me, the musical touchstones are literary. In his novel, Les Bâtisseurs d’Empire ou le Schmurz (1959), Vain uses sound to disrupt the complacency of a middle-class family’s new apartment. A short story from the Holiday issue of Jazz Hot (1948) daringly, inappropriately, outrageously, pits Nazis against Commies in a mock dialectic, the politics replaced by the querelle de bebop. This is not The Producers, with its distance to temper the conceit. One can only wonder at the response to the Goebbels-Vain debate that begins with “Heil Gillespie.” There is also a short story I am searching for that features a mechanical piano that mixes cocktails. I can imagine it in a carpeted hotel bar in Cap Ferret, next to JK Huysman’s organ.

Vain’s world is equal parts jazz et Jarry. He did much too much too well, and in a breathless flurry of overproduction in his short life, perhaps nothing great. That is to say, I am in awe.

B. George – written somewhere of the north China coast….