As a Nineties baby my unusual love of doo-wop records stems back to a Time-Life commercial for an oldies CD collection I saw on TV when I was around 10 years old. I was intrigued by the harmonies of groups like The Platters, The Monotones and The Silhouettes. I quickly immersed myself by looking at YouTube videos of doo-wop groups and upon further research I found out that some of the groups I was listening to were from the very place I lived, Brooklyn.

While Brooklyn is known for its rich hip-hop history and being the birthplace of hip-hop artists like Jay-Z, Notorious B.I.G. and Lil Kim, its musical presence actually dates further back than just hip-hop. In the 1950’s and 1960’s Brooklyn’s neighborhoods were the home of a plethora of doo-wop groups. Some doo-wop groups in Brooklyn achieved mainstream success and had long careers while others enjoyed regional success and only released a few records. 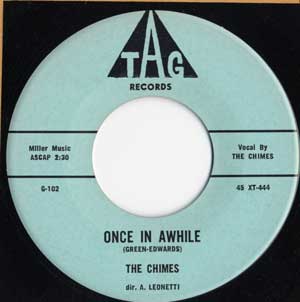 Doo wop was a form of rhythm & blues that featured vocal group harmony with either musical accompaniment or acapella. It originated in the 1940’s in African American communities in the major cities around the United States. Philadelphia, Chicago, Los Angeles, Baltimore, Detroit, Pittsburgh, Washington, D.C. and New York were home to popular doo-wop groups.

New York City’s boroughs each had their own successful doo-wop groups. Manhattan had Frankie Lymon and the Teenagers, The Harptones, The Cadillacs, The Crests and The Drifters. The Bronx had Dion & the Belmonts, The Earls, The Eternals and The Chantels. Queens had The Heartbeats, The Cleftones and The Capris and Staten Island was the home of The Elegants. 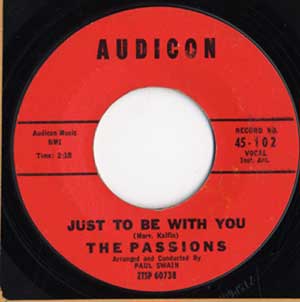 Brooklyn’s doo wop scene was very popular in Bedford-Stuyvesant (my hometown), which was the home to Brooklyn’s Black population. In the 1910’s and 1920’s, Blacks from the South began to migrate to cities in the North to escape strict legal segregation and find better employment. In New York, Blacks settled first in Harlem and began to settle in Bedford-Stuyvesant after the the A Train subway line was extended to Rockaway Avenue in 1936. 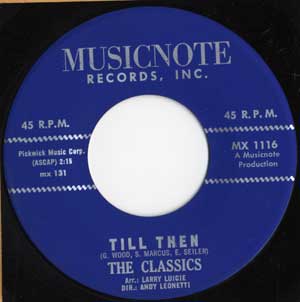 The Four Fellows were one of the first groups from Bed-Stuy to gain success. Forming in 1953, The Four Fellows incorporated both gospel and barbershop quartet-style singing influences in their sound setting them apart from their peers. They had a smash R&B hit in 1955 with “Soldier Boy” (Glory 234, not the same as The Shirelles’ 1962 hit of the same title). A year later another Bed-Stuy group, The Chips released “Rubber Biscuit” (Josie 803) which was not a hit but would become a popular song in doo-wop circles due to its nonsensical and humorous lyrics. The song was featured in the movies The Blues Brothers and Mean Streets. 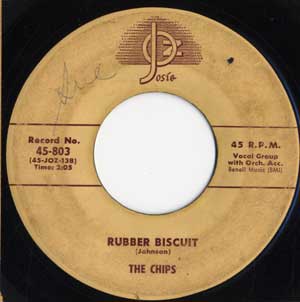 Two other important Bed-Stuy groups were The Velours and The Rays who both appealed to the teenage market with a sound that was popular at the time, love ballads. They both had big crossover hits in 1957, The Velours with “Can I Come Over Tonight” (Onyx 512) and The Rays with “Silhouettes” (XYZ 102, Cameo 117). Other Bed-Stuy groups were The Impacts, The Fantastics, The Mello-Harps, The Five Discs and The Wheels. 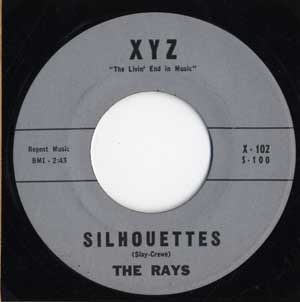 White doo wop groups in Brooklyn were also popular. Taking cues from Black groups such as The Ravens and The Ink Spots were groups like The Three Chuckles. It was an all Italian-American group from Red Hook whose record “Runaround” (X 0066) charted at Number 20 on the pop charts in 1954. Featuring the lead of a young singer named Teddy Randazzo, they had follow up hits “Times Two I Love You” (X 0162) and “And The Angels Sing” (X 0194) before Randazzo went solo. 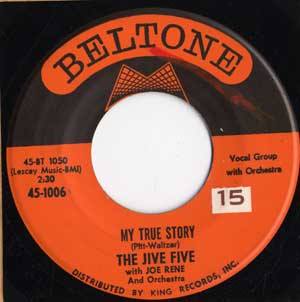 Bensonhurst, an Italian-American neighborhood was the locale of many different groups including The Mystics who hit the charts at Number 20 with “Hushabye” (Laurie 3028) in 1959, and at one point included Paul Simon (then recording as Jerry Landis, Tico & Triumphs and Tom & Jerry) singing on one of their records. The Passions’ “Just To Be With You” (Audicon 102) hit in the same year. The Chimes would strike big in 1961 with the Tommy Dorsey 1937 standard “Once In Awhile” (Tag 444) which hit Number 11 on the Hot 100. The Classics would be the last Bensonhurst group with a hit in 1963 with “Till Then” (Musicnote 1116) peaking at Number 20 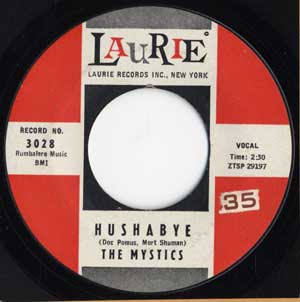 Other Italian American groups were The Admirations who sung “Bells Of Rosa Rita” (Mercury 71521X45) who came from East New York. Known for their version of “Unchained Melody” (Herald 583), the members of Vito & The Salutations came from Brownsville and Canarsie.  The Bay Bops, who recorded “Joanie” (Coral 9-61975), were all from Sheepshead Bay.

Most groups in Brooklyn were usually made up of one race which reflected the segregated status of Brooklyn’s neighborhoods at the time. There were some integrated groups such as The Impalas from Canarsie who featured a Black lead singer and had a Number 2 hit in 1959 with “Sorry (I Ran All The Way Home)” (Cub K 9022) and The Fascinators from Bushwick, who had a regional hit in the same year with “Oh Rose Marie” (Capitol F4247), had one Black member. The Cashmeres from Park Slope were an all-Black group that included two women. Their soulful 1960 song “Satisfied (Parts 1 & 2)” (Lake 705) is one of my favorite records. 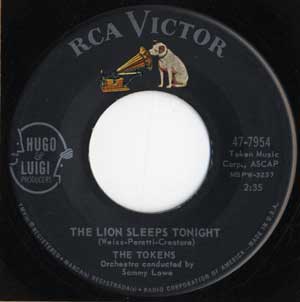 Brighton Beach was home to a group that once included Neil Sedaka, The Tokens. They are most known for their Number 1 song “A Lion Sleeps Tonight” (RCA 47-7954) in 1961. Little Anthony and the Imperials were a group that had members from Fort Greene, Bedford-Stuyvesant and Red Hook. Their debut hit “Tears On My Pillow” (End-1027) in 1958 featured the high pitched voice of “Little Anthony” Gourdine. They were one of the more successful groups to transition from doo wop to the more popular soul sound of the 1960’s with “Goin Out My Head” (DCP 1119). Another group that made this transition was The Jive Five who, except for lead singer Eugene Pitt, were from Bed-Stuy. Pitt, a Brownsville native, lead the group on their most notable hit “My True Story” (Beltone 1006). The Jive Five enjoyed later success in the midst of the British Invasion and Motown crossover success with “A Bench In The Park” (United Artists 936) and “I’m A Happy Man” (United Artists 853). 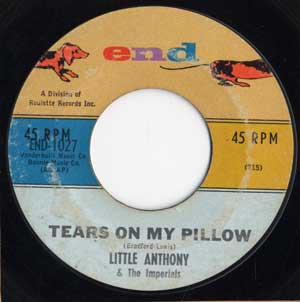 I’m not sure what neighborhood The Danleers were from, but they were a Brooklyn group and had a hit in the summer of 1958 aptly called “One Summer Night” (Mercury 71322X45). Other groups from Brooklyn were Malcolm Dodds and The Tunedrops who recorded “It Took A Long Time”(End 1000) and Eddie & The Starlites with “To Make A Long Story Short” (Scepter 1202). 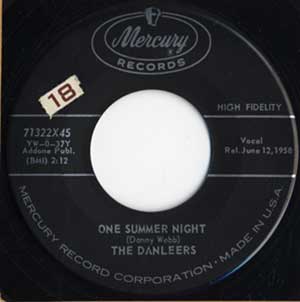 Although the doo-wop sound is no longer in style, it is sampled and interpolated in many rap songs today. Hip hop acts such as Action Bronson, Nas and Digital Underground have sampled the work of Little Anthony and the Imperials. The Tokens’ “The Lion Sleeps Tonight” has been sampled in songs by rappers Cam’ron and Amine. Oldies radio stations who play doo-wop also help to keep the memory of the genre alive as well as introduce it to the next generation. Many of the old Brooklyn doo-wop groups are still active and performing to this day, including Little Anthony & the Imperials, The Passions and The Mystics.