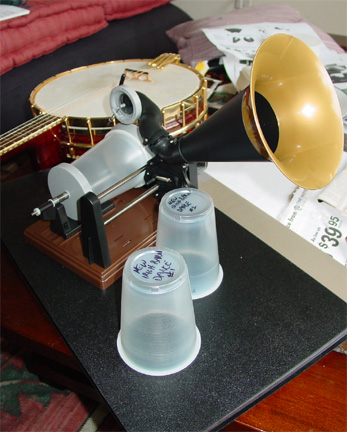 Hey kids! Remember our Anti iPhone Contest? Well, it’s still on [not really – check below]! But what’s changed is that I can now listen back to your submissions! As you can see, my New Edison-style Cup Phonograph Kit is here, it’s together and it’s fabulous. Really, it’s exceeded my expectations. Now, don’t buy this expecting a top-of-the-line field recorder. Think of it more along the lines of a Fisher-Price PXL-2000 for the audio set – built for awesomeness, not for speed. (BTW, how cool are PXL-2000 films? If you’ve never seen one, check out this goth music video by the band The Vanishing and this totally awesome stop motion noir film starring GI Joe action figures – wicked cool.)

As you can see, the grooves track FAIRLY evenly: 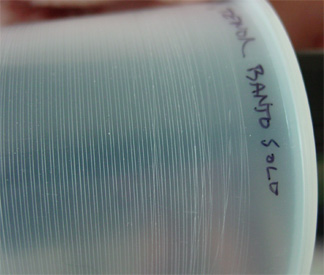 The reason for this is the threaded guide that keeps the recording head moving along at an even pace. It makes for good recording and relatively easy playback.

Sure, it takes a little practice to figure out how get the machine to give you an acceptable track (word to the wise – be LOUD), but I find that what you will get is well worth the effort. Have a listen to me playing “The New York Barndance”:

Greatest recording ever, right? I think the momentary drop outs were because I was sitting on the same surface as the recorder and bounced slightly as I played. In my defense, though, it was the best angle for getting the banjo’s sound directly into the horn. All in all not bad for a first go. (BTW, if you have any questions about the machine itself, leave them in comments and I’ll answer them as they come.)

So now it’s up to you. The ARChive wants to preserve TWO parties on plastic cup. Two cases of Moxie hang in the balance. Let’s get on it, folks! The streets just can’t wait any longer!

UPDATE: due to high levels of non-participation which led me to drink up the prize, the contest is suspended until further notice.