Mad Men, one of the highest regarded dramatic serials on television today, has received a number of awards including prestigious Peabodys and Emmys, and TV critics as well as fans seem to adore the show. Indeed, Mad Men has been especially lauded for how well it captures the early Sixties in New York City: the clothing, the cars, architectural design, ethos and culture. Even the kitchen cabinets on the sets are evocative of this long gone era. So I began tuning in…

For those of you who are not familiar with the show, Mad Men follows several people who work in a Madison Avenue advertising firm during this period.  Every frame seems to have been sculpted with the precision of an artist, with great care to get details correct.  In order to capture the flavor of what is taking place, very brief scenes (sort of snap-shots that are painted with minutia) are sprinkled throughout each episode.  Although the scenes occasionally slow the action, they add much spice to the show and contribute to the pleasure one may receive from watching Mad Men.  It is in one of these brief scenes where the sharp eyes of the ARChive of Contemporary Music found a major gaffe in season four, episode two.

The offending episode, “Christmas Comes but Once a Year,” is anchored around a Christmas party held by the ad agency to impress its biggest client.  In a very brief scene, it lasts perhaps three seconds and appears about 24 minutes and 25 seconds into the program, a man’s hand is seen placing 45s onto a record changer. Of course this scene captured my undivided attention. These precious three seconds tell the viewer exactly how the music for this party was supplied.  However, note the screen capture of the scene…

Three of the four records with discernible labels that appear in the scene may be considered of the time, 1964: (from left to right) Chancellor, Parkway and Decca.  The label of the 45 in the man’s hand–although a bit bleary–is clearly that of Eric Records.

Eric Records was founded as a reissue label in Philadelphia in May 1968 by Bill Buster.  Although the actual recording on the disc in hand may have been from 1964 or earlier (and perhaps that is why the disc was chosen for the scene), it most definitely did not appear on the Eric label until at least four years later!

Also, in the lower right corner of this scene is another anachronism.  Clearly visible is the Peter Max-like rainbow design of a record sleeve that was used to ship 45s manufactured by RCA Victor but not until the early 1970s.  Lou Reed’s “Walk on the Wild Side” (1973) was issued with this sleeve, but not Elvis Presley’s “Viva Las Vegas” (1964). 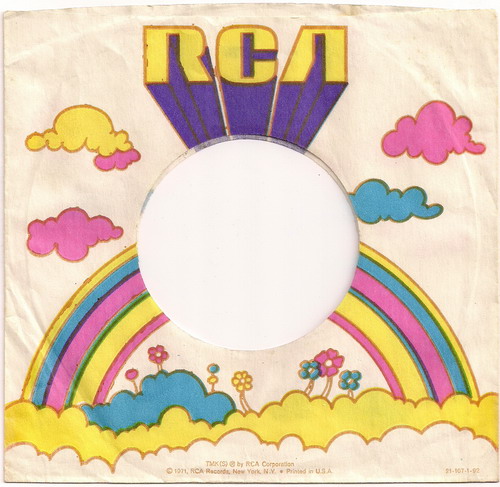 Inaccuracies such as these drive record enthusiasts (such as those here at the ARChive) nuts.  Both of these mistakes could have been avoided if the otherwise fine people at Lionsgate Productions (who make the show) were to consult the ARChive regarding the placement of sound recordings into scenes such as this.  If anyone who reads this knows people involved with the production of Mad Men, perhaps they will suggest to them that they should contact the ARChive before they start placing LPs with UPC codes into their scenes.

…and B. sez:  Do not do this at home or on a TV show.  NEVER touch a sound recording’s surface with your fingers!