home » blog » Back to the Future, past…perfect

Fred and I are out here in San Francisco to be a part of the Internet Archive’s (IA) annual party to celebrate the past year’s doings, Building Libraries Together.  It so happens that the party date coincides with one of the target dates from the film, Back to the Future, Oct 21, 2015.  Well we’re still waiting for the self-tying shoelaces, but in the meantime there’s been a lot of progress made towards digitizing our collections.

My talk was on how libraries, like ours, are able to share collections and build partnerships.  We went over all we’ve done with the IA, and helped introduce the concept (soon a reality) of ‘Music Lockers’ – a way for libraries and archives to better share their materials with each other and avoid redundant digitization and expense.  Pic above is little me on the big stage showing one of those guys from the future that we recently digitized.

The IA also set up a display case of some of our Grateful Dead live concert cassette tapes and bootleg LPs in their classy San Francisco lobby.  The IA honored the band as part of the cerimonies this week.  As you may know the IA is the official host of more than 10,000 live Dead concert recordings. 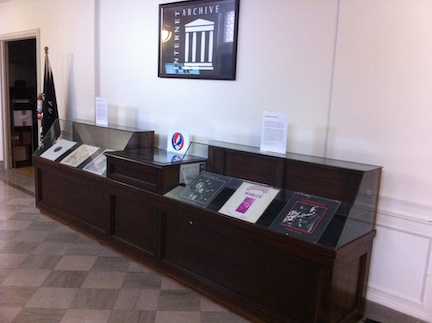 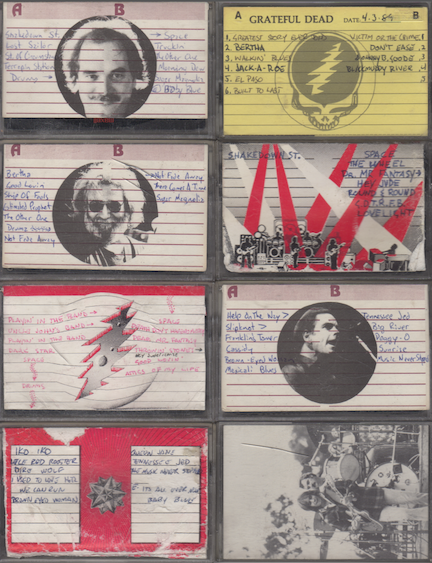 Party-time over, the next morning we began organizing all the recordings that we have collected out here on the West Coast.  On our first trip out to the warehouses, a tad lost, we came across a smallscale yardsale.  Here’s Fred with a pile of tasty Latin LPs and one featuring a man in a space helmet for our Space Helmet Gallery.  We like it because spaceguy seems to be having a smoke inside his headgear! 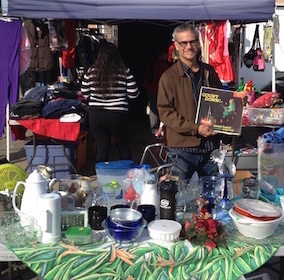 It’s not all work of course.  One night we went to hear a reading by Laurence Ferlengetti. Mr. Ferlengetti did a short reminiscence of two of my favorite subjects; Paul Bowles and Cuba.  He related that Bowles made the impossible claim that he had no hashish (thinking straight-looking Ferlengetti may be a Nark) and that Fidel had a very limp handshake.  While we could hear the talk fine, we could only get a glimpse,  but geeze, how is possible that a noted radical looks a lot like Dick Chaney? 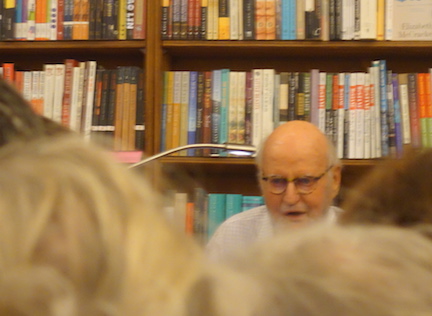 Our host for the evening was Fred’s pal, singer songwriter Peter Case.  Fred snapped Peter in Kerouac Alley, the alley aside City Lights Bookstore.  This legendary backdrop for the stars and touristy curious, is most notable for the shots of Bob Dylan with Allen Ginsberg. 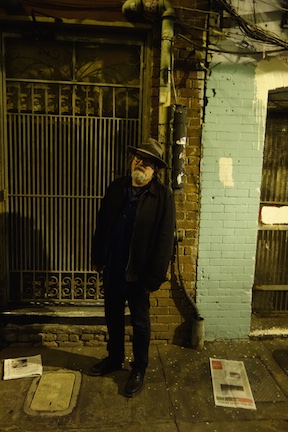 Now we are busy sorting 250,000 LPs that will be shelved in the East Bay area, part of our shared collections with the Internet Archive.  Send in interesting restaurant suggestions, as we’re getting a little Burrito’d-out.  Next up, Sunday services and blessings from Coltrane + Hayes.