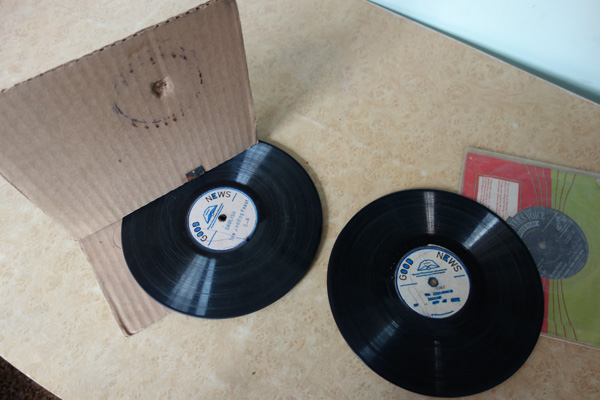 While in India I had the great pleasure of meeting Suresh Chandvankar, a scholar and one of the catalysts behind the Society of Indian Record Collectors (SIRC).  He also spoke at the IASA conference in New Delhi, is an author and has helped Dust to Digital to release material from the Young India Label.  His true love is Indian Classical music on 78s.  He was also my guide to the record haunts in Chor Bazaar (Thieves Market), Mumbai.

One of the treasures that he showed me was this attempt to create a portable record player for the masses, for pennies (film below). He remembers finding this simple, ingenious device while hiking in the Himalayas forty years ago.  At first he thought the cardboard was there just to separate the two discs until the seller told him that he could only buy the records if he bought the gramaphone also.  “What gramaphone?” was his bewildered response.  And to his amazement the cardboard was unfolded and the player revealed.  To his amazement the two discs and player was six rupees (11¢).  Here’s how it works;

The corrugated cardboard is divided into three folded sections.  On one end is a revolving metal disc with a spindle, on the other a metal stylus (needle).  The 78 rpm record has a spindle hole, and a small hole on the outer edge of the label to insert a pen, pencil or stick.  The cardboard is folded to make a triangular shape, the stylus placed on the record, the triangular fold acting as a resonator.  The user insets the pen and handcranks the disc, and voila, an early walkman.

It’s an iffy sounding system, but then again, it does indeed create a gramophone for practically nothing. The designers were proselytizing Christians, hell-bent on bringing “The Good News” to, in their minds, the heathen Hindus.  The disc containing sermons, Bible stories and quotations.  The only info I could glean from a partially obscured label states that this is a “Cardtalk Record Player” manufactured in Bangalore.

So feel free to make one of these at home, a great add to our DIY plastic cup cylinder disc player @ http://arcmusic.wordpress.com/2007/07/29/anti-iphone-contest-all-systems-go/

For fine academic work on early Indian sound recordings see back issues of Record Collectors News published by the SIRC that Suresh has made available online, downloadable as PDFs – http://hindi-movies-songs.com/sirc/index-sirc.html