You never know what you’ll find when you’ve got a free day and no plans at all.  That’s the way I like to see other countries, other cities.  You can have all that nature stuff, no woodland creature ever pleased me as much as an eccentric shopkeeper.  So along a well traveled road on President’s weekend in Brewster, NY, there it was, The Avalon Archives, “the Museum of Roots & Rock n Roll”. 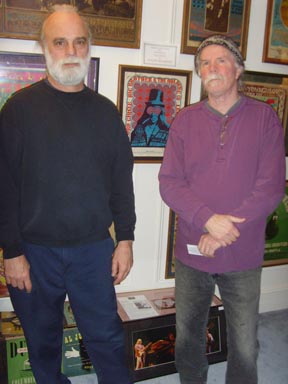 This personal and Putnam County focused collection has been lovingly assembled by Director Ned Moran with the assistance of Rob Patterson.  Both seem to be there most weekends, cheerfully pointing out the this, that, and what of all you see.  Ned used to run Uncle Willy’s, a rock and folk club on Broadway from 1983 – 1989.  Much of this archive once graced the walls of his club, but are now arranged floor to ceiling in six rooms of an old farmhouse.  Yes they have the requisite jars of Marky Ramone’s Pasta Sauce, and off-the-shelf teen idol chachkas, but there are quite a few more iconic items, and a nice take on local history.

I enjoyed seeing a tattered but original copy of Woody Guthrie’s “Bound for Glory,” early rare rock posters, and a large collection of photographs that were shot when Bob Dylan needed a fame break and hung out locally working on the Self Portrait album, some of these photos used in the album’s package.  The boys were mighty proud of an original five foot long design/mock up of a Grateful Dead stage-long stage set.

By the way the nature is pretty good also, re the tufted skunkcows that are penned along with a variety of other Tilly Farm fauna.   A trip, worth a trip. 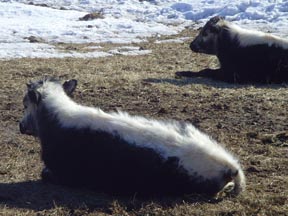 Free admission, open Saturdays and Sundays, noon to 4pm.  They don’t have a computer, but a bit of info is up at myspace.com/avalonarchives. Located within the Tilly Foster Farm complex, 100 Route 312, Brewster, NY, right off of route 84, Carmel/Brewster, exit 19.

Speaking of Carmel exits, ARChive Board member Michael Feinstein has been in the news lately as he begins his own archive adventure, housing the Michael Feinstein Foundation for the Preservation of the Great American Songbook in Carmel, Indiana!  The city has donated a 70,000 sq ft / 150 million dollar facility to house Michael’s collection of sheetmusic, recordings, books, correspondence and memorabilia and to bring music to the heartland.  ARC has already made a small contribution to this grand endeavor, as a conduit for a major collection of Playbills.

Carmel is betting on the Cleveland/Branson/Canton model; place a potentially major attraction in an under-visited locale, with a tenuous link to the subject area, sprinkled with celebrity.  I’m for any formula that can get tons of folks to drop by, while creating a great focused collection that preserves important materials.

Now if you drop a few towns down from Carmel, NY, just off the sawmill, you can visit the newly relocated Woody Guthrie Archive in Mt Kisco. 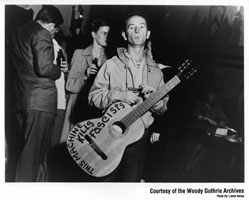 ‘Woody’ (if I may be so bold), illustrated just about everything he touched and many of his lyric sheets, beyond their important POV, are folk art in their own right – a joy to see.  Tiffany Collanino, the knowledgeable and dedicated archivist, gave a presentation at ARC last Thursday hosted by the Archivists Roundtable of Metropolitan New York (ART).  More than 60 folks heard Tiffany and Nico Thom, Archivist at the Eisenach International Archives for Jazz and Popular Music in Germany, discuss their collaboration and exchange program.

OK, one last tenuous link of archiving to Presidents Day.  Yesterday’s Times offered a story about portions of Thomas Jefferson’s retirement library, recently discovered after being missing for more than half a century, at Washington University in St. Louis. It’s a long detective tale of sales and donations.

So let’s honor and remember my favorite founding father and President, Thomas Jefferson, for who he really was; Deist (believed God created all and then washed his hands of us, and more remarkably, dipped a quill for fanatical days, crossing out of every occurrence of the word ‘Jesus” in his bible), traitor (had sworn an oath to his country, England), patriot, bibliophile (sold, rather than donated, his original book collection to the Library of Congress), slaver (Sally Hemings), genius (“… pursuit of happiness…”) and radical revolutionary (“The tree of liberty must be refreshed from time to time with the blood of patriots and tyrants. It is it’s natural manure… God forbid we should ever be twenty years without such a rebellion…” – ref the Shays’ Rebellion in a letter to William Stephens Smith, November 13, 1787, and inspiring Bertrand Barère de Vieuzac’s successful guillotine-inducing condemnation of Louis XVI.)

More remarkable about Jefferson’s comments were that he believed the armed rebels against his country, despite their misguided motives, were to be supported.  Of course he was writing from Paris, like Franklin living well, fermenting revolution, Che Guevaras of their day.  The echos of post-revolutionary America still resonate, with forgotten veterans, massive foreclosures, prison for minor crimes, private armies financed by merchants, abandoning of the sickly poor, and rivals deemed enemies.

So in these times of revolution – Tripoli, Cairo, Madison – Happy President’s Day!