No sleep, loading in, and finally the launch of Cuba Music Week.  Nap and then off for my first concert, Mambo Memories, Reliving the Palladium Era at the Hostos Center in the Bronx.  If you don’t live in New York City let me tell you that I live in lowest Manhattan, Tribeca, and Hostos in way at the top.  But it’s more than a geographic difference.  Whereas Tribeca is almost exclusively White, the Bronx on the west side is primarily Black and Hispanic.  It still seems like a the city I moved to 40 years ago, with Mom and Pop stores still hanging on, and a vibrant street scene.  A pretty good dinner at Sam’s Soul Food (hickory smoked ribs, collard greens, rice + peas, cornbread) was $12, not a downtown $27.  And they still have great places like the Hostos Center for the Arts and Culture. 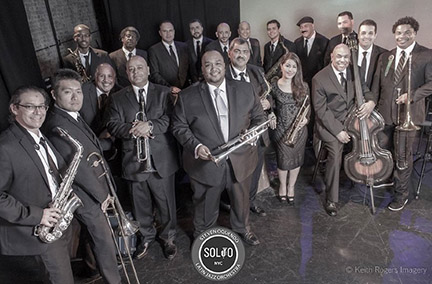 Hostos Community College serves the community, and the Center celebrates it. In a concert space rivaling the best in Manhattan the show got of to a big bang, by big band, the Steve Oquendo Mambo Orchestra (SOLJO).  It’s still a thrill to hear a 12 piece horn section and this young band was swinging! The night features a good overview of the music that made up the era and featured short sets by Frankie Figueroa, Nayibe La Gitana, Orlando Marín (pointing out that as the FOURTH best mambo bandleader he was a tad overlooked by the press), Frankie Morales, Papo Pepín, Cita Rodríguez and the Eddie Torres Dancers,  Radio stalwart Vicki Solá was Mistress of Ceremonies.

Highlights for me was vocalist Frankie Figueroa, with a showmanship series of moves mimicking a boxing bout, and the main reason I attended, a chance to meet and hear conguero Cándido Camero. 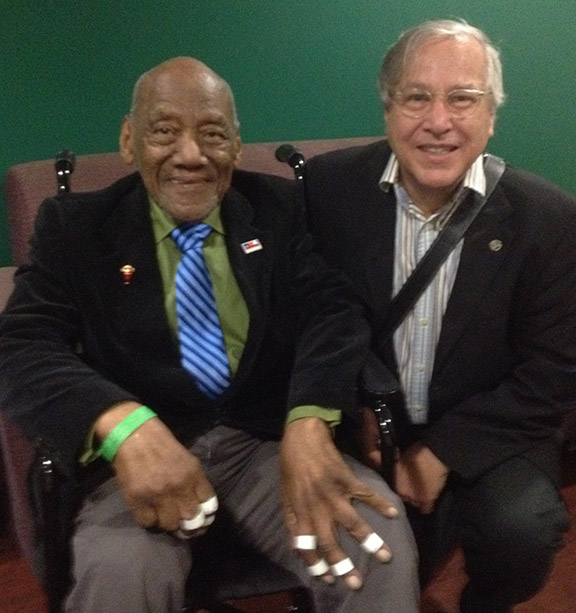 The 95 year old Candido was still vibrant and a quite a showman, despite a natural slowdown that comes with age.  He was kind enough to sign one of my favorite albums by him (above) and allow a few pics.  We have 19 LPs by him here at ARC.

I also learned a lot about the vibrant scene still dedicated to preserving the music – info that seldom moves downtown on our disgracefully insufficient subway system -things that we are adding to our Cuban Music Week site.  I had no idea that the Oquendo Mambo Orchestra has a regular Tuesday night residency at the Mamajuana’s Café in the Bronx (3233 E Tremont Ave,  718-824-8400).  It’s free and fab, I urge everyone to check them out!

Hostos will be back next season with more great shows and I want to thank Center Director John A. MacElwee and his staff for making our visit possible and the evening so enjoyable.