So, b.ARC comes in today and says “hey, you got your camera? There’s a line of people outside of the Knit. Go over and figure out what’s going on.” The Knitting Factory is one of our neighbors, so I waltzed right over and was back in a flash. Here is what the scene looked like at 10:17AM this morning: 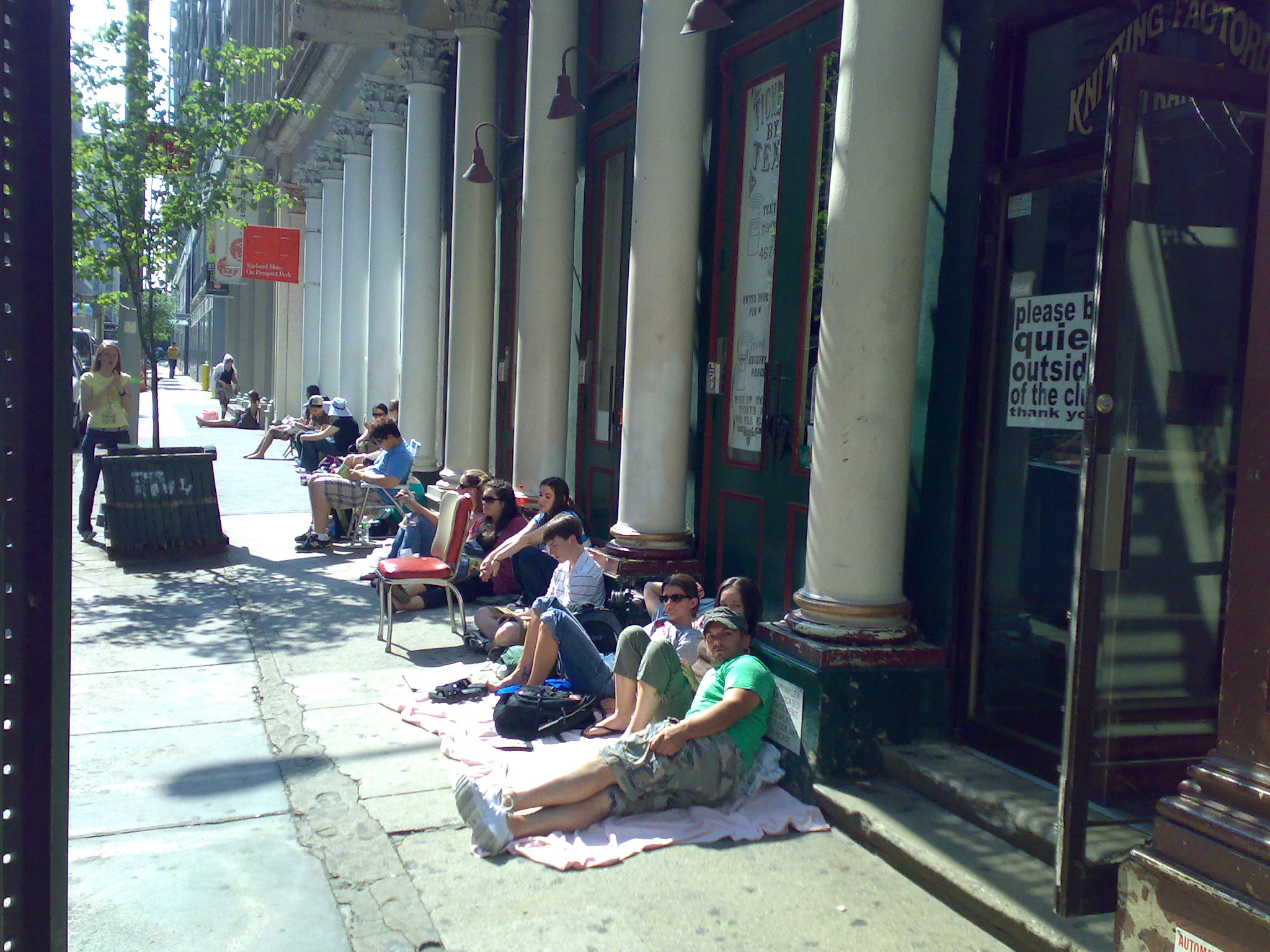 This is 10: 17 in the AM! Who gets up that early to go to go wait in line on Leonard Street on a hot July morning? Maybe I could find my answer on the Knit’s site. Unfortunately, the way listed the show was somewhat unhelpful: “MySpace Books presents: a celebration of the release of Trevor Kelley and Leslie Simon’s book about all things emo, ‘Everybody Hurts’ – with a solo performance by a very special guest.”

I could find anything, but I suppose that’s what “secret shows” mean. So, I asked the guy in green t-shirt and ballcap (first in line, lounging) who told me that Dashboard Confessional would be there playing a free show tonight. Just as the phrase “who cares” went through my head, the woman in the blue chair (two heads back, in front of the second pillar with her arm behind her head) exclaimed “if you come back in a couple hours the line would be SO much longer.”

I was intrigued. Dashboard Confessional? Playing a secret gig? Tonight at the Knitting Factory? A much longer line? OMGWTFAwesome?!

I reported back to ARChive where B, Jon and our intern Tom were waiting in rapt anticipation for news. When I told them what was going on, Tom said: “A free show? So THAT’S how they get people to come see them.”

Anyway, following Blue Chair Girl’s advice, I went back at around 1:00 and everyone was gone. The guy at the Knit’s door told me that they had to tell everyone to go away. (Maybe because the cops said something? Maybe wanted to be kind to their neighbors? I don’t know.) It looked like everyone did, but when I turned onto Church from Leonard, I nearly tripped over a couple of teenage girls sitting on the corner, wearing all black (right down to the Chuck Taylors), just out of sight of the doorguy. This was at one o’clock…if they were going to be there all day, those girls would have a long wait!

However…the doorguy at the Knitting Factory said that the throngs would be allowed to return at 6:00 in the PM for the free secret concerts. THAT’S 6:00 PM Dashboard Confessional fans! I get out of work at 6:00, so I will go back and take a picture (or two!) and post when I get home so everyone who can’t make the show can see how many people were there. I’m not going to hang out, though, so if you’re a Dashboard Confessional fan, please be punctual as I would like a good picture!

Stay tuned for an update!