Began the day in København at Denmark’s National Radio Station, DR. Their collection is probably the best in the country – they even had 3 copies of ‘O’Superman’ released on my old One Ten Records label. But alas, like all radio stations, sufficiently stickered-up and annotated on the front covers to identify properly, discourage theft and break the hearts of archivists. But then again they are preserving a great amount of music. Can’t argue with that.

Other spotchecks revealed the amazing breath of the collection and how seriously they take their mandate of collecting all Danish releases. As ARC moves towards its goal of creating Scandinavian Music Week, station executives generously promised all of their cataloging metadata to the project. A big thanks to Louise Kjeldsen & Thomas Dose. To prove their sincerity we were treated to a lunch like the one served at Christmas time in DK, roast pork with a crispy skin and pumpkin soup.

Burping all the way we motored out of town to a little village near Roskilde to visit a private jazz archive. There we met armature archivist Leif Druedahl. That’s Leif at the top of the page. What you’re seeing are the discs organized by label, with Leif facing the local Tono Records stack.

Amazingly Mr. Druedahl has amassed a collection of 120,000 seventy-eights, and catalogued 16,000 discs so far. Then he digitizes them. (Hear some on soundcloud) Then he gives them away!  One upcoming give-away could be the Great78Project.  The first step in this developing relationship is our donation of hard drives where he will load-in the 16,000 discs he has already digitized and electronically cleaned up. The next step will be finding a way to make Mr. Druedahl happy with the donation of his Scandinavian releases to the Great78Project.  Some donations to ARC from his collections below. 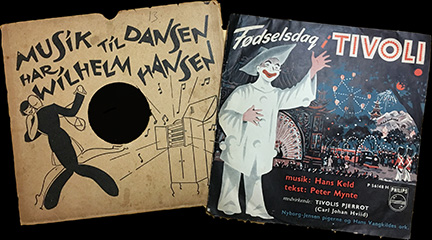 A big thanks to radio legend (and Punk chronicler who I have known for years) Jan Sneum who tipped us to the collection. None of this would have been possible without the help from the wonderful folks from the many Danish Libraries who invited me to Denmark. They are: Anja Kyed Amlund, Music Librarian at Lyngby Taarbaek Libraries, Simon Nielsen Ørregaard, Librarian Head of office in the article and music section of the Danish Library Centre, and the freewheeling Lars Kjelfred, who is a music librarian at Copenhagen’s main library, Københavns Hovedbibliotek, but is a tad coy about his actual job description.

All of these good folks have promised to drink beer and help with packing up the 78s.  We know one of those will happen for sure!

Tomorrow its North to Aarhus!