Here’s another early Ellie Greenwich release, as a member of the Raindrops.  It feature’s her song, Hanky Panky (written with Jeff Barry), that became a hit by Tommy James and the Shondells.   I saw it performed by Mr. James, at the Carousel Teen Club, outside Yougstown Ohio, around ’66 or ’67. 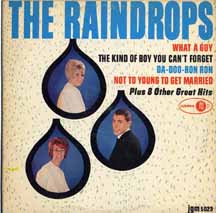 About the same time we found Ellie’s LP, a friend of a friend sent along this musical conversation, touching on location, death and poetry, while in a doctor’s waiting room…

Guy: You like music?
Me: Uh, yes.
Guy: I like music! I got ah M-P3. I put all my records on it.
Me: Wow.
Guy: YEAH! Over a hundred of ’em. It’s all classic stuff. Not this new bullshit.
Me: Uh-huh.
Guy: Gram Parsons. Greatest musician ever!
Me: Really.
Guy: Born right here in Florida (points to the linoleum floor) but everyone thinks he’s from Texas.
Me: Oh, really.
Guy: YEAH! Not that I have anything against Texas. I love Texas. There’s no state like it.
Me: No argument here.
Guy: You ever been?
Me: Yes I have.
Guy: It’s a great state. No place like it! You know if it weren’t for Gram Parsons there wouldn’t be any Eagles. Yeah, you give a listen to “Burrito Deluxe” and you’ll know where that whole style of music comes from. It’s from Texas, not California.
Me: Well that’s enough damning evidence for me.
Guy: Damn right!
Me: You know that you can recite most poetry written by Emily Dickinson to “The Yellow Rose of Texas?”
Guy: NO! [long pause] Really?
Me: Really.
Guy: [Blank expression] I don’t know much of her stuff.

Me: Because I could not stop for Death,
He kindly stopped for me;
The carriage held but just ourselves
And Immortality.

Guy: Fuck! That’s good. Who was that?
Me: Emily Dickinson.
Guy: She’s from Texas, huh?