home » blog » For the Record

As I was at the car rental counter in San Fran, a crack in the corporate infrastructure allowed a peek into the internal workings at Enterprise. Seems they celebrate all their sales ‘records’ and goals by scribbling stats on actual records. Cute. Makes me wanna write a review of their service on a car door.

I’m out here getting a few thousand 78’s ready to be digitized and culling them from the more than 70,000 we have stored at the Internet Archive. That means putting them all in new sleeves, and packing them safely. I’m trying to select interesting, less well-known ones, particularly hillbilly and country recordings – something I know very little about. So here are some 78s I’ve run across that were totally new to me. 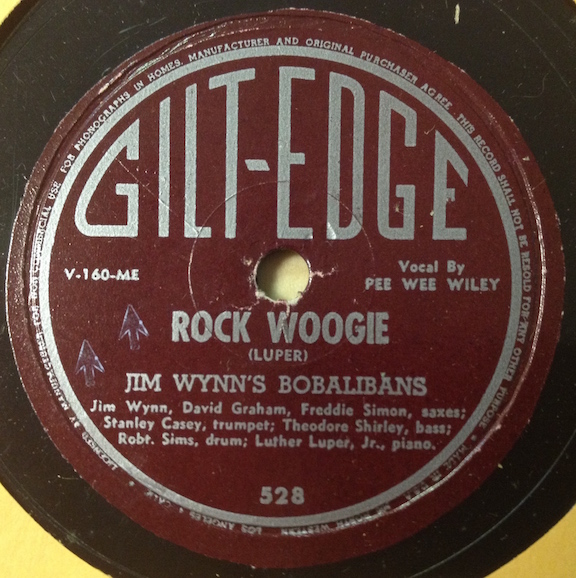 Big Jim Wynn claimed to be the first honkin’ sax man to lay down on the stage and wail.  T-Bone Walker played with Wynn for about 17 years and Wynn became a much in demand session man, for many years performing with Johnny Otis.  This 1945 jump record features blues shouter Pee Wee Wiley.   “Ain’t it grand, ain’t it grand to rock with a load of charm” as the song says.  And as an official “Bob” I’ve yet to meet a “Bobaliban.”  but I heard tell the name came from “Be-Baba-Leba/Ee-Bobaliba” a big novelty hit from 1945.   Hear Woogie here.

Then there’s “Sheik of Araby” (MacGregor Records, 1025) by Geordie Hormel with the curious subtext “Recorded by above artist alone, using multiple method recording.” Early multitrack recording? As wiki has it; “In the 1950s and 1960s, Hormel composed music for numerous television shows including The Fugitive, Lassie, Naked City and The Adventures of Rin Tin Tin. He also sang as part of “The Utility Muffin Research Kitchen Chorus” on Frank Zappa’s triple album Joe’s Garage (1979).   I like to think of him as the grandson of the inventor of the corndog!  By the way you future researchers, four out of the five bio-links that are the basis for the Wiki article on Hormel are no longer in existence – why we say the internet is just a good huntin’ dog, no more.

Another discovery is Wilbur Sweatman of the Dixie Trio. He was stuffing three clarinets in his mouth while Rahsaan Roland Kirk was still teething. The IA has one of his recordings here, and we discovered a few more by the Dixie Trio in our treasure trove of 78s.

“Mambo Jamo”/”Dave’s Boogie” (Capitol, 973) is by Dave Barbour, a jazz banjo/gtr player and hubby to Peggy Lee – first of four and he made her a star before he drank himself out of the picture.  A more permanent bond is revealed on the very next record in the pile, “Blue Bonnet Waltz” by Oklahoman Colleen Carrol. (Cardinal, 1038). While never a big country star, her kid Garth Brooks did OK.

Did you know there was a band called the Beverly Hillbillies long before television claimed the name? Yup, Ezra and his Beverly Hillbillies made sides for Courtney Records in the 40’s. And before redheaded comics hit the little screen there was hillbilly singer Les “Carrot Top” Anderson and his “She’s Dynamite In Blue Dungarees” (Decca white label, 46370). Turns out there were tons of Hawaiian disc in the piles – best label name promising a “Lei from Hawaii;” A-Mus-Ing Records. 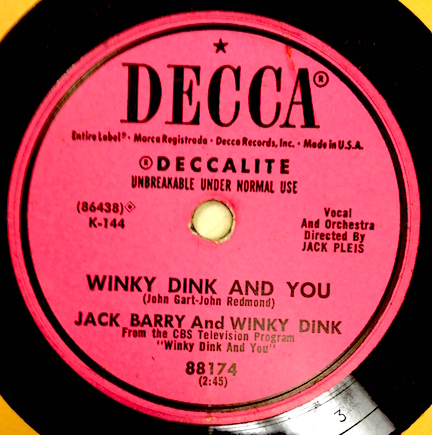 The capper: “Winky Dink and You” by Jack Barry and Winky Dink (Decca, 88174).  The Winky Dink character on TV and on the ten-inch was voiced by Mae Questel, who was also the voice of Betty Boop and Olive Oyl.  Beginning in 1953 Winky Dink was the first interactive ‘thing’, ever.  The original You + Tube.  Here’s how it worked.  You ordered a green vinyl membrane and  rubbed it onto your TV screen, and you could draw on it and play games with the cartoon Winkster.  And you think you live in a brand new world… Two things shut down this Dinky world as kids perched nose to screen and those big ol’ cathode ray tubes were spewing doses of free X-rays and then when the green vinyl got too cruddy kids just crayoned the TV screen.

Just back from a Miike Snow concert where white folks wiggled to this power-pop trio (plus two tonight) at a swell club, the Independent.  Very Durran Durran, but everyone had a swell time singing along to “Animal”  to end the set.  On the walk home the street was also in a good mood as the Warriors basketball team set a record for the most wins in a season.  OK, off to bed, up at five to dig for truffles in those piles of shellac like a good huntin’ dog.

PS: Why books are STILL important – more than half of the artists I checked – about 800 – have no biographical citations online.