As you may have been reading in the ARChive’s recent blog posts, the ARC has recently receive a very generous donation from the estate of Mark Jacobson, a North Carolina car dealer. He collected certain artists more than others—see a previous blog regarding Jimi Hendrix records. One of the artists Mr. Jacobson collected heavily was Bob Dylan.

Like the ARChive, Mr. Jacobson often picked up different versions of the same album. An album that has been in print a long time can go through several changes, especially if it was initially released when monaural records were still being pressed. Mr. Jacobson gave us five different copies of Dylan’s second album, “The Freewheelin’ Bob Dylan.” Three of them are early pressings with what is often called the “two-eyed” label (the ‘eye’ being the CBS logo, known as the ‘walking eye’). One states “360 Sound Stereo” in black on the red label (later it was printed in white). There are two mono LPs; one with “Guaranteed High Fidelity” on the bottom of the label, the other with “Mono” in white on the label. The fourth copy is a more recent (1998) audiophile pressing (Mr. Jacobson LOVED audiophile pressings!) made by a British company called Simply Vinyl.

It’s the fifth version of “Freewheelin’” that is the most interesting—perhaps one of the most interesting of all the records donated by the Jacobson Estate. When “Freewheelin’” was first assembled, it had four songs that didn’t appear on the LP as we know it today: “Rocks and Gravel,” “Let Me Die in My Footsteps,” “Gamblin’ Willie’s Dead Man’s Hand” and “Talkin’ John Birch Blues.” Late in the production of the first pressings of this album, Bob Dylan decided to substitute these songs with four others: “Girl From the North Country,” “Masters of War,” “Bob Dylan’s Dream” and “Talking World War III Blues.” However, somehow some copies of this LP escaped before the finalized track listing took place and the albums that have the first batch of songs are extremely rare. To understand this, I suggest you read the post in the Record Mecca blog that discusses it better than I could [ https://recordmecca.com/news/a-copy-of-the-freewheelin-bob-dylan-with-the-four-withdrawn-tracks-surfaces-from-the-person-who-bought-it-in-1963/ ].

So no, Mr. Jacobson did not have the original pressing of “Freewheelin’” in his collection—something I thought sure that he would, since he had so many very rare records. Instead, he had a copy of “Freewheelin’ with a timing strip pasted to the front cover that has the original track listing with the four replaced songs! The actual disc has the promotional white labels—extremely rare in itself!—but they list, and the LP plays, the same tracks as the version we all know.

For the uninitiated, a ‘white label promo’ is highly regarded by record collectors for two main reasons: 1. Promos are almost always pressed early in a record’s lifespan, thus the stampers are new and the sound quality is most likely to be better than later pressings—especially if the record is in print for a long time. 2. Almost always there are less white label promos pressed than stock copies, making them rarer and more desirable by collectors. Also, a ‘timing strip’ is a sticker that displays an album’s song titles, publishing company of the songs and the times of the songs in an easy-to-read way. The timing strips often contain information that is not available on the commercially released product and thus are important to media people—and the ARChive. Often these stickers are scraped off because they hide much of the front cover. Finding one that is intact is a good thing for the ARC. Finding one that has the wrong track listing of a legendary album is amazing!

One other odd thing about this record: It included a sheet of paper, titled “Notice” and with the mono and stereo catalog numbers, on which it was typed, “Please note that on Side 1, Band 3 and Band 6 are reversed.” The funny thing is that the tracks were NOT reversed and even if we had the LP with the original four tracks, the note is wrong!

BTW: We think the yellow star with the price on it may be an estimate of the value at one time, OR, what Mr.  Jacobson paid for the LP.  Regardless, this is an oddity, and a special rarity that will reside with the ARChive of Contemporary Music forever. 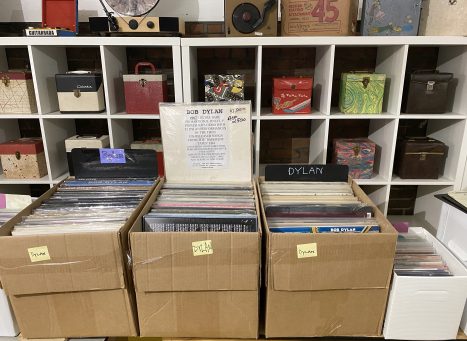 The boxes of other Dylan recordings in this collection

PS: All stickers and markings (except timing strip) are on an outer plastic sleeve, the disc is mint.