Among the 12,000 or so records donated to The ARChive of Contemporary Music by the Estate of Mark Jacobson (see previous posts) are more than 75 James Brown LPs. Many of them are original mono pressings with the black King label. Almost all of them are in near mint to VG+ condition—which in itself is an amazing thing, as James Brown records were loved to death by his fans, giving them the impression that the records may have been cleaned with sandpaper.

One of them needs to be discussed here: Good Good Twistin’ by James Brown and his Famous Flames (King 780). 1962 was the year of The Twist—the dance sensation that swept the nation. Although James Brown was not above recording dance records—indeed, several are presented on this LP—he never cut a song with ‘twist’ in the title (unlike his label mates Hank Ballard & the Midnighters, who wrote and recorded “The Twist” first, then followed it with about a dozen twist records).

This album was actually issued several times, twice with the same cover photo of two white teens twisting back-to-back. The second time the record came out, it was retitled Shout and Shimmy, when that track on the album became an R&B hit in 1963. A year later, the album was completely repackaged—with the same catalogue number and track listing, and most pressings have the original Good Good Twistin’ title on the label—as Excitement Mr. Dynamite. This later title is the most common.

Unfortunately, when the package was changed to Excitement, it left off the liner notes by Seymour Stein, who, before giving the world “Hocus Pokus” by Focus, The Ramones and Madonna, worked for King records as a wee lad. Those notes are reproduced here… 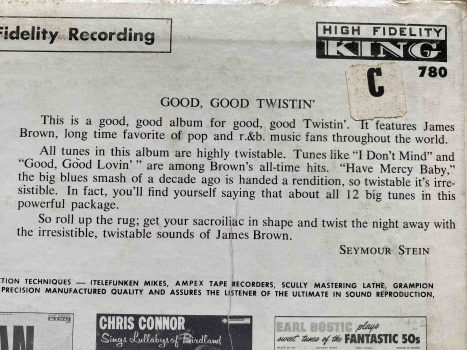 Directors note: Dear Seymour, we believe these good good liner notes would have been appropriate for any of the records you released…

Speaking of Mr. Brown, did we mention we also have a first pressing of James Brown’s essential, instrumental album Grits & Soul, from the collection of Rolling Stones bassist Bill Wyman.  This album has Wyman’s handwritten notations on the back cover.