The other day I was cataloging a box of 80s punk and metal records (lots and lots of bad 80s metal from Metal Blade Records) and came across this record: 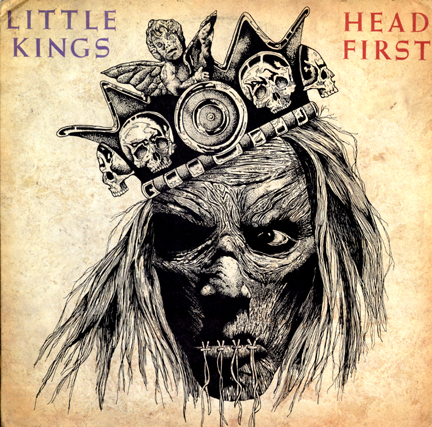 Not a bad cover, I s’pose.  Anyway, it stood out because it was the only record in the box that had a textured sleeve.  (Plus, the cover reminded me a little of a Kreator single I used to have.)  Another thing that struck me was that it was released in 1989 by Epitaph, making it sort of an early Epitaph record.  So, I put it on.  Not bad music.  Excitedly (well, as excitedly as he gets), Phast Phreddie comes up and asked me if I put it on.  Turns out the drummer, Chris Bailey, was in Phreddie’s old group Thee Precisions :

Checking out the rest of the group, something struck me about the lead singer/guitarist’s name “Gregory Verbinski.” It was really familiar, I just couldn’t put my finger on what it was, though.  This is what he looked like:

That didn’t help me figure it out, and because it really started bugging me I googled it.  Turns out that after being in the Little Kings, “Gregory” Verbinsky went to film school, changed his name to Gore Verbinski and became a director.

He went on to direct all sorts of successful big budget films, most recently, the Pirates of the Caribbean franchise.  Apparently, Phreddie knew him a little “back in the day.”

Gore, if you’re out there reading this, we’d love it if you dropped by the ARChive.  We could order Vietnamese sandwiches (best in the city!) from the Sáu Voi, show you around the place and talk about stuff and things!  If it’d make you feel more comfortable, we could even try to get our new friend Joe Franklin to come by as well.  It’d be a grand old time.

Looking forward to hearing from you,