Please join your friends at the ARChive as they present their first event up at Columbia University – Greil Marcus in Lipstick Traces: Live 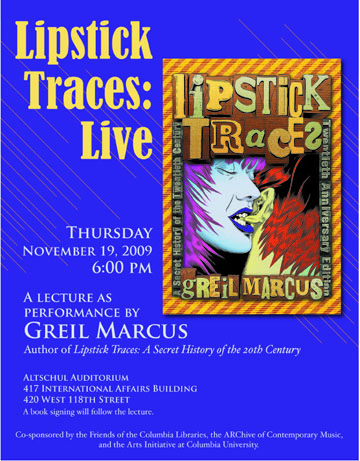 In Lipstick Traces: A Secret History of the 20th Century, Greil Marcus delved into the cross-currents, tangles, and whirlpools that made such vastly different movements as dada, lettrism, the Situationist International, and punk part of a single current. To mark the just-published 20th-anniversary edition of the book, Columbia University presents Greil Marcus in a one-man performance of Lipstick Traces.

This will be smart AND fun!

A book signing will follow the event. Lipstick Traces: Live is co-sponsored by the Friends of the Columbia Libraries, the ARChive of Contemporary Music, and the Arts Initiative at Columbia University.

In addition, the Music & Arts Library at Columbia University will display books by Marcus, books that influenced him, and posters, records, and other materials courtesy of the ARChive of Contemporary Music. The exhibition will be on display from November 1 to December 15, 2009 at The Gabe M. Wiener Music & Arts Library, 7th floor of Dodge Hall, at 2960 Broadway.

Here’s a simple bibliography of Greil’s work:
* Rock & Roll Will Stand (1969), edited anthology
* Double Feature: Movies & Politics (1972), co-authored with Michael Goodwin.
* Mystery Train: Images of America in Rock ‘n’ Roll Music (E.P. Dutton & Co., New York, 1975/2008).
* Stranded: Rock and Roll for a Desert Island (1979, editor and contributor)
* Lipstick Traces: A Secret History of the 20th Century (1989/2009), a book on 20th century avant-garde art movements like Dadaism, Lettrist International and Situationist International and their influence on late 20th century countercultures and The Sex Pistols and Punk Movement.
* Dead Elvis: A Chronicle of a Cultural Obsession (1991), about the phenomenon of Elvis Presley in the years since his death
* In the Fascist Bathroom: Punk in Pop Music, 1977-1992 (1993, published in the US as Ranters and Crowd Pleasers)
* The Dustbin of History (1995)
* Invisible Republic: Bob Dylan’s Basement Tapes (1998; also published as The Old, Weird America: Bob Dylan’s Basement Tapes, 2001), an account of American folk culture, seen through Bob Dylan’s Basement Tapes.
* Double Trouble: Bill Clinton and Elvis Presley in a Land of No Alternatives (2001)
* The Manchurian Candidate (2002)
* The Rose & the Briar: Death, Love and Liberty in the American Ballad (2004, co-edited with Sean Wilentz)
* Like a Rolling Stone: Bob Dylan at the Crossroads (2005), a “biography” of the Dylan song
* The Shape of Things to Come: Prophecy in the American Voice (2006)
• A New Literary History of America (2009, with Werner Sollers, Harvard University Press)

Finding Altschul Auditorium on Columbia’s Campus:
The International Affairs building (also known as SIPA) is on the eastern side of Columbia University’s Morningside Campus. The building is at 420 W. 118th Street, on the south side of 118th Street between Amsterdam Avenue and Morningside Avenue (closer to Amsterdam). Altschul Auditorium is located in the lobby of the building on the first floor, room 417.

Entering From Campus:
From the main campus entrance (right by the subway stop at 116th Street and Broadway) walk east all the way across College Walk (116th Street) to Amsterdam Avenue. Go north two blocks to 118th Street and cross Amsterdam; the International Affairs building is there on the corner. The entrance is on 118th Street (south side).