It’s a long story: P. went to Sweden as a High School exchange student.  P. loved it.  Abba dominated the airwaves.  P. was an amateur classical cellist.  Later in life, P. went back to Sweden to learn to weave. One of her Swedish “sisters,” Annmari, gave her an LP of Swedish folk music, by “Skaggmanslaget” (The Bearded Guys Society.  Snus, mus och brännvin, Sonnet Records, Sweden, SLP 2522, 1971). She loved it. 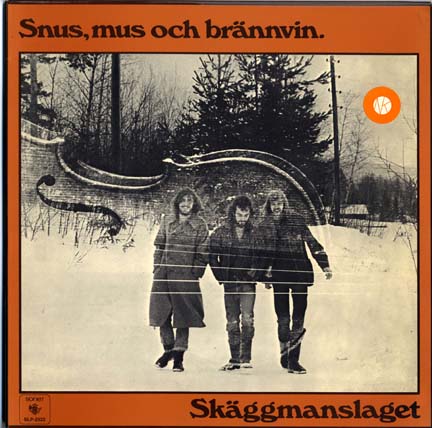 P. became a textile designer and, later in life, got a Fulbright Scholarship to teach in Finland.  Unable to bring a cello to Helsinki, she brought a violin.  So, later in life, P. becomes a Scandinavian folk fiddler.  And for the last twelve years P. has been playing Nordic folk tunes for dancers, every Weds evening, with the NY Spelmanslag at dances hosted by Scandia New York, at the Town & Village Synagogue, 334 E. 14 St (between 1st/2nd Aves).

This summer, Annmari’s daughter, Frida, got married to Magnus, in hometown Delsbø, Hälsingland, Sweden and P., (the lady in red), went off to party and play a few tunes at the wedding with the local pickup band.

After the wedding, and a week at fiddle camp, P. was off to some high-flying adventures in Norway, with an old textile pal, Vibeke.  Now Vibeke has a helicopter (how?  why?), a very nice helicopter:

So into the mountains they go, stopping at a cobalt mine:

and the family ‘hytte’ (summer house).

Like all those who love the ARC, no trip is complete without hunting down the rare and wonderful that each culture has to offer.  P.’s gifts included a tee shirt from the Musikmuseet, the Swedish Music Museum, two hard-to-come-by books on Scandi music, (The Polish Dance in Scandinavia and Poland, various authors edited by Märta Ramsten, Svenskt Visarkiv, Sweden, no date, ISBN: 91 85374 36 9. with a CD dated 2003 and Röjås Jonas Kosmos Boda, by Jan Wolf-Watz, (Biström, Sweden, no date, ISBN: 91 89447 97 2, with a CD, about the distinctive fiddle tradition in Boda, in Dalarna, Sweden, as played by iconic fiddler Röjås Jonas), some nyckelharpa (keyed fiddle) emblazoned matches:

and this incredible early whatever LP by The Aloha Hawaians [sic], Beautiful Isle of Somewhere. (Intercontinental Records, Holland, 10.023, 19??).  Now the record inside is the wrong one (by the Happy Hawaiians), but still, one of the best gifts EVER!

And the moral of this story is: May all your children be foreign exchange students – it will fill their hearts with music and make them soar!