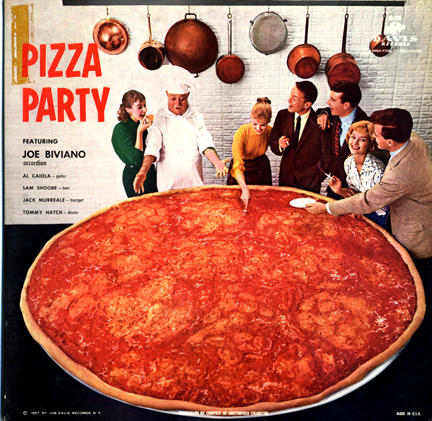 As I was looking through the ARChive’s Biz Markie holdings, I happened upon Pizza Party, a 1957 album featuring accordionist Joe Biviano. Joe who, who ask? A founding member of the American Accordionists’ Association (and its President from 1942-5, 48-9, 61-2 and 67-8), Biviano got his musical education at the Damrosch Conservatory and was an occasional performer with the New York Philharmonic. At one point he was also the soloist in a Dimitri Mitropoulos-conducted performance of Wozzeck at Carnegie Hall and also wrote the score for a Warner Brothers-produced film called The Knife Thrower.  Making these culturally “direct” records probably did a good job paying the bills (I understand he made several).  Although lacking the renown of an Elvis or John Lennon, Biviano remains a known commodity among accordion players (there’s even a Joe Biviano tribute site).

I have to confess that it was the cover of a bunch of people hanging around a giant pizza smoking was what really drew me and the image really lets a guy know what he’s in for – let’s just say that if this group was at little Anthony Corleone’s first communion Frank Pantangelli would have been very happy, indeed.  What’s amazing to me is that the liner notes reveal that at 50 square feet this pizza was once considered the largest in the world (eat it, Guinness!).  And look how small the party of people is!  Truly made back when telling someone to “super size me” really meant something. You people these days! Mangia, mangia!

Readers might be interested in knowing that this pizza was baked for the Liggett & Myers tobacco company “who used it in this advertisement just for fun to illustrate the Big Big pleasure you get when you smoke Chesterfield – the cigarette that gives you more of what you’re smoking for!” Ahh, the 50s.  You people these days! Fuma, fuma!

BTW, if you’re in New York and are into accordions (and honestly, who isn’t), go check out Mainsqueeze Accordions over on Essex.  Don’t forget to check out their “Beast of the Week” feature!  It’s killer!