Sure, we all watched the Electric Company at one point or another. Chock full of famous actors (Bill Cosby, Rita Moreno and Morgan Freeman were regulars while folks like Gene Wilder, Victor Borge, Mel Brooks and Joan Rivers all popped in now and then). But what do we know about the people who provided the music? As I was poking around today, I came across the site of 150 Music, a small, independent record label. One of the people who established 150 Music is Gary William Friedman, whose claims to fame include a long list of film, theater and TV credits that includes having been the Electric Company ‘s musical director for a season. He wrote about 40 songs for the show’s fourth season, among them the awesome Spider Man theme. Check it out in Spidey Meets the Yeti, in which Spidey must save the day Mighty Mouse style from a serial food-sitting yeti menacing the community:

Friedman was just one of the shows great musical directors. The Electric Company’s first – and probably most important – was Joe Raposo. He had the job for the show’s first three seasons. Raposo was a student of Nadia Boulanger, he wrote music for Dr. Seuss, he wrote for Sesame Street (Many credit Raposo for making Sesame Street a more musically diverse place; if you’re under 40, you probably have him to thank for your musical taste. Remember ” ‘Being Green?” That was him too.), he scored Three’s Company (yes, that Three’s Company) and his song “Sing” – originally recorded by the Carpenters – was reprised on the 2005 episode of South Park called “Wing.” He also was awarded Grammys and Emmys, and was nominated once for an Oscar for his song “The First Time it Happens” in the Great Muppet Caper. Raposo, a Harvard graduate, was probably the one who recruited fellow alum Tom Lehrer for the Electric Company. Lehrer wrote about 10 songs for the show, including “Menu Song,” “Silent E” and my favorite, the “L-Y Song”:

Raposo produced and wrote or co-wrote most of the music for the Electric Company’s Original Cast album (Warner Brothers BS 2636, 1972; below left): 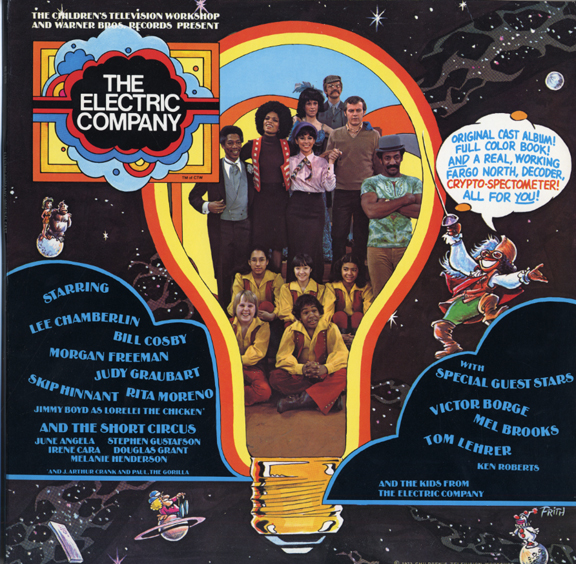 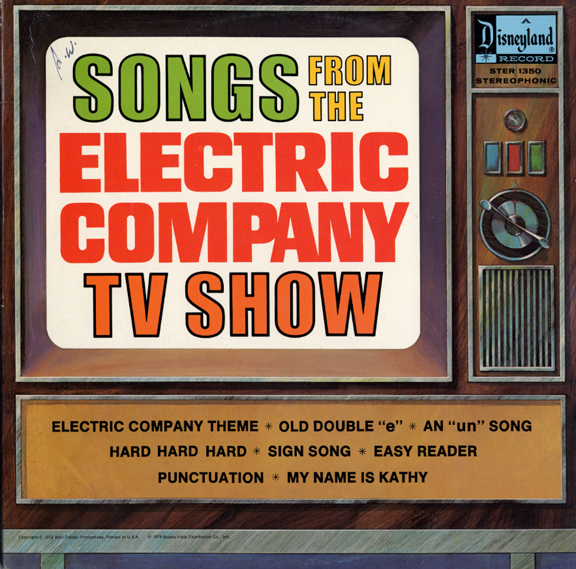 The record – this copy from the ARChive’s collection – is a lavish affair. A gatefold sleeve with a comic book insert, a “crypto-spectometer” volvelle (à la Led Zeppelin III) and art by Jack Davis, I can’t imagine how anyone in their right mind would have given this to a child. It was reissued in 1974 (Sesame Street Records CTW 22052), but the later version was not as cool. CTW cut costs with less interesting packaging and art, and all of Cosby’s songs were removed.

The 1974 album was far more exciting than the album of Electric Company songs Disney put out (Songs From the Electric Company TV Show, Disneyland Records STER 1350, 1973; above right). It puts the television right on the cover, sending a great message to kids that it’s all about the TV. They sapped all the soul out of Raposo’s songs as well. Good going Disney!