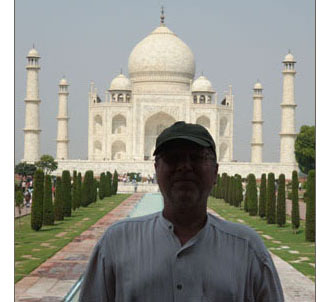 OK.  Everything was set for my trip to India except  for the leg from Delhi to Agra to Varanasi.  This would involve trains.  Now trains cannot be booked direct by internet via the US, unless you have an Indian Tel #.  There is a work around, but it didn’t work.  The travel agent who booked the conference I was attending said no tickets avail to Varanasi on the date I wanted to go.

So I waited until in India, and every agent said not possible, and one said yes,  Reassurances abounded, skepticism remained.  I reserved a car and driver to Agra to see the Taj Mahal.  You do NOT want to drive here by yourself – they drive on the left, lanes are only a suggestion, and every trip is a game of chicken.  Agra was swell, driver great, only one flat tire, and so off to the train station at end of day for the leg to Varanasi.

I was prepared for something fishy, as one yes to 100 no’s has meaning.  It turned out that the train station was outside of Agra, 21 km.  OK. Bad, but not so bad.  We get to the station and the train has been delayed .  NINE HOURS.  To me that’s not a delay, that’s a cancellation.  That means the night train, that I paid for a sleeping berth, would become an all day train ride.   Plus I would have to stay up all night at the station (a dismal place it be, with no A/C or security) in the middle of nowhere.  So my driver, Ashesh, rhymes with hashish, who is a saint by the way, asks if there is another train that night.  Yes, but booked. What to do? Back to Delhi and take a plane?  Pay $200 to drive to Varanasi?  Wait for a train that may never come? Then I become my old self.

I ask a porter if he can get us on the train that is running tonight, that is completely booked.  He makes some calls.  A guy shows up.  He makes some calls.  We make a deal.  The train is to be here at 8:30.  The guy making the deal at 8.  Both are 45 minutes late.  I pay the $40 for the ticket I have already paid for once, only when I am in my sleeper car, in my seat on the train.  We pay small monies to the porter.  They bribe the conductor.  My driver has stuck with me the whole time, and did I mention he was a saint?

I am now amongst a herd of innocent Danish people, younger than my beard.  The Indian tour leader loves Led Zep and is a hoot.  No one ever asks to see a ticket.  A very fat Indian man on the bunk next to me bought 4 dinners with him and gave them to everyone in our compartment and some things for the porters and conductor.  Fresh sheets and towels, I had a nice sleep, the train was only 1-1/2 hrs. late, and the Danish Tour people drove me to my hotel.  I may have actually saved money in the long run.

I think India is getting to me.  I never got mad, and I didn’t stop trying to work out the problem.  I am now the balcony of the beautiful Ganapati Hotel, sipping lemon tea overlooking the Ganges. 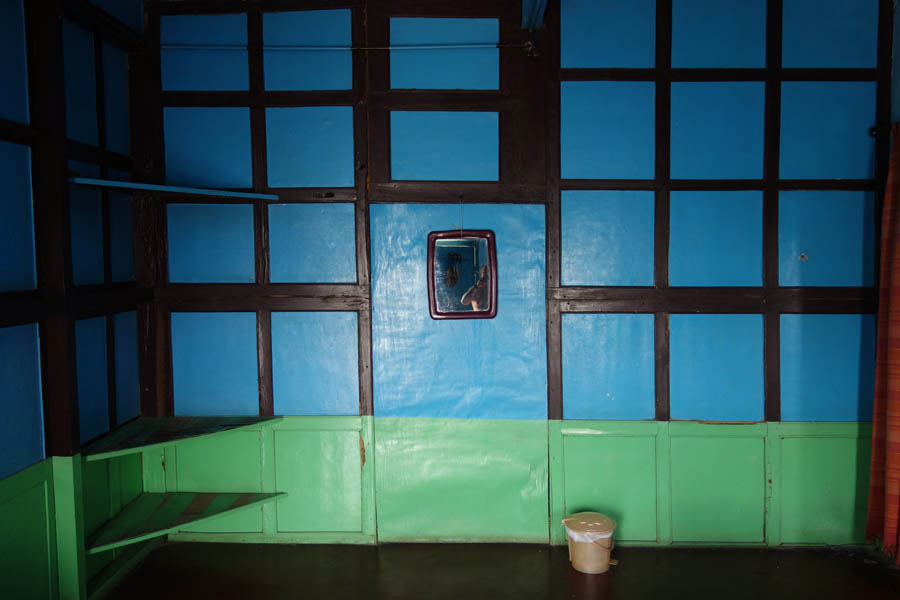 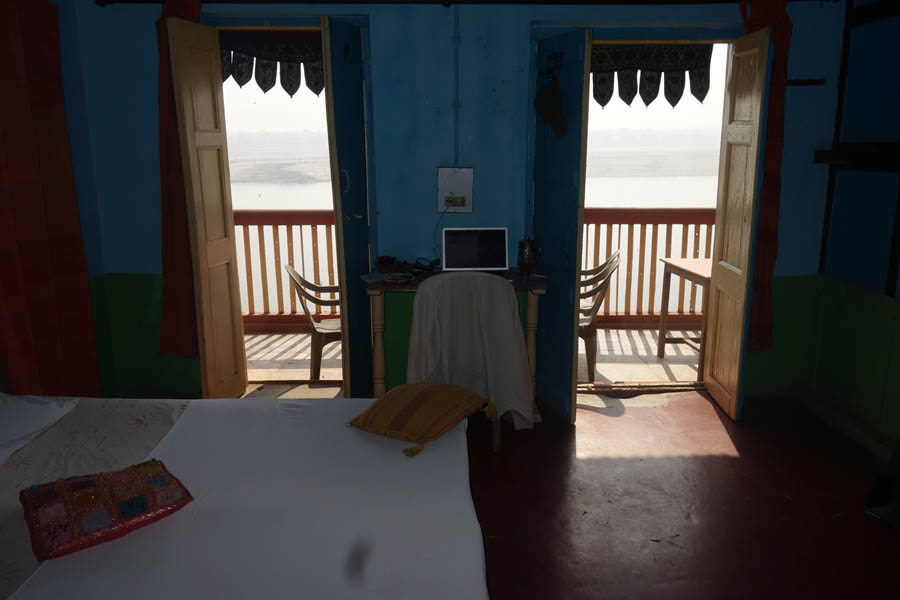 All this by the way has given me an idea. Richard, from the British Library, one of my friends here at the conference, related a story of how once, when out collecting sounds in the Amazon, his travel connection by boat never arrived.  He took the only avail transport he could find, and that turned out to be a boatload of brigands, who raided villages along the coast, putting him in great danger.  Now anyone who has ever gone after music has had a similar, if not as impossible, experience.

Soooo… a book entitled; “The Boat’s Not There – Harrowing Tales of Music, Musicology and the Search for Sound.”

I’m keen to relate my trip deep into Colombia under the protection of a drug cartel to attend a festival, or my days at Fela Kuti’s compound in Nigeria.  I think the hills are alive with such tales, and I welcome contributions!

And had not all of this happened I might never have seen this super amped wedding soundblaster truck! 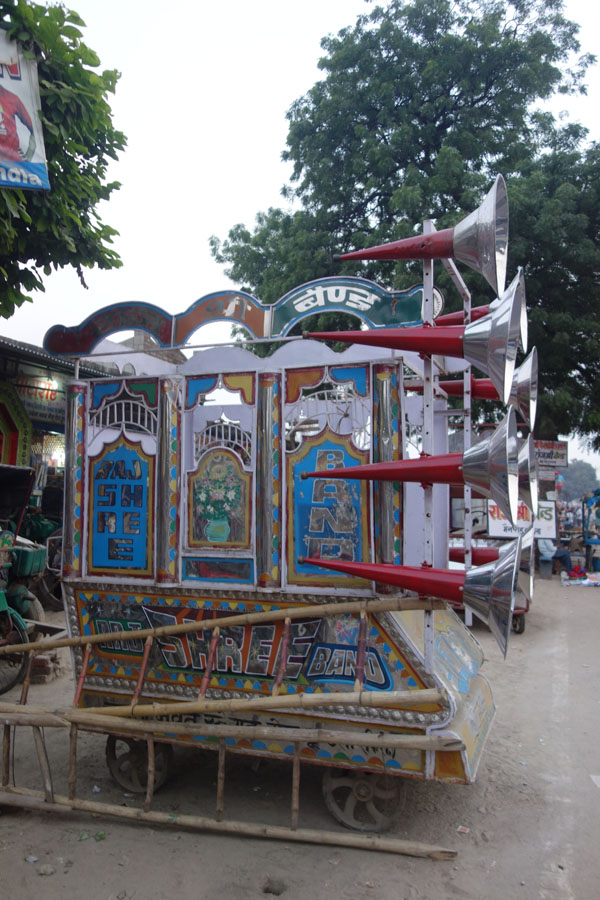 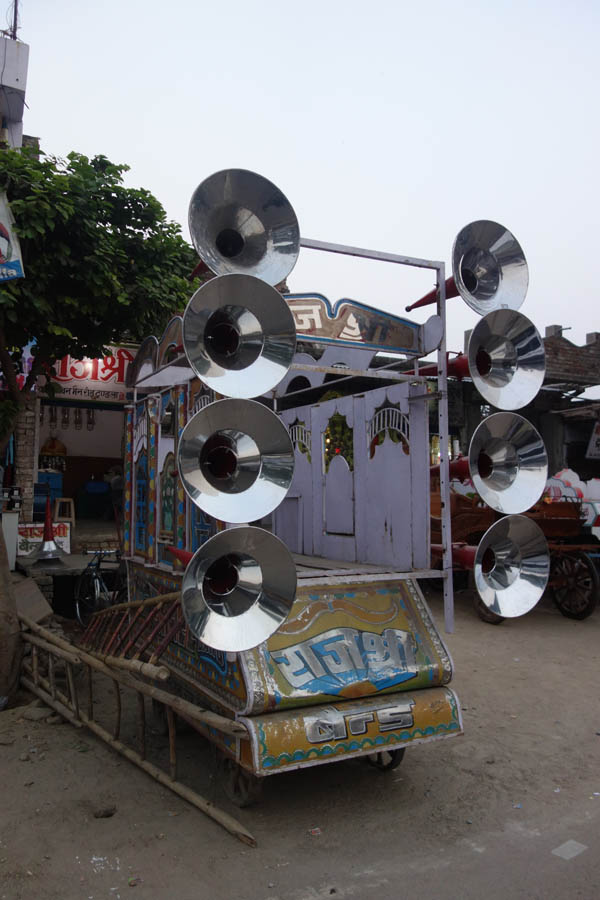