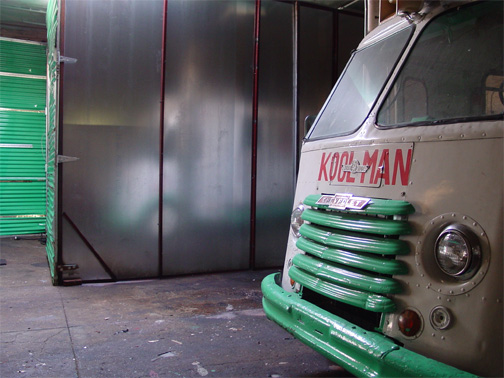 It’s become that time of the year again, when the ice cream trucks come out of hibernation and flood city, town and village neighborhoods with little cascades of sound. I keep an ear as wide open for the first of the year as I do my eyes for the first Robin…the first one came REAL early this year (end of January?).

Anyhow, I’ve been following ice cream truck music for some time now. (I was even quoted in the New York Times, today (5-20-07). Very exciting stuff!) It all started with some historical research in 1998 that I fashioned into a conference paper and presented at conferences in 1999, 2000 and 2001. (After the 2000 presentation, a British music theorist disdainfully referenced my paper on his web site basically to say that now “anything goes” in the discipline. Brilliant!) In 2004, though, Tod Lippy asked to publish it in his amazing arts journal Esopus (You can download that article here, by the way.) and as far as I know, it has been the only attempt at a history of the genre. The article was intended to be a play both on academic seriousness and the fairly predictable set of themes people bring to writing about ice cream truck music. I thought taking this kind of frivolous music REALLY seriously would be a funny thing to do, and it kind of was even though I had to attenuate the “hilarity” somewhat. The original title – “Adventures of a Frozen Novelty Hunter,” a play on John Lomax’s “Adventures of a Ballad Hunter” – was changed to the somewhat less funny “Ice Cream Truck Music, the Sound of Frozen Novelties” when someone (rightly) pointed out that the article had nothing to do with hunting.

I don’t take the music that seriously, but as research begets research, I’ve tended to notice how the meanings applied to ice cream truck music change. When I first began the research, for example, ice cream trucks and their music were often symbols of the perverse, demented or psychotic. See, for example, their role in the films such as Maximum Overdrive:

Here you can see one in the “horror” film Killer Klowns from Outer Space (you only need to watch the first few seconds of this clip to get the gist of the thing):

I wonder if Killer Klowns from Outer Space was the inspiration for Sweet Tooth, the “Ice Cream Truck Killer” in the video game Twisted Metal. He was a psycho clown (aren’t they all?) and drove an ice cream truck.

Ice cream trucks (and their music) have had a kind of creepy role in Steve Buscemi’s Tree’s Lounge while in Ghost Dog, Raymond’s truck seems to have almost mystical properties.

They have also been used a kind of comedic device. Big Worm, for example, sold weed out of his in Friday; the kind of ominous leitmotif that plays when Big Worm is on his way is at once comic and menacing. (By the way, although everyone seems to think that you can get weed from an ice cream truck, I’ve yet to actually meet someone who has done so…although I did read an article once about a driver being arrested for selling pirated DVD from one – what’s society coming to?):

(No, this isn’t ACTUALLY from the movie Friday and there’s no music, but it’s the scene from the film where Big Worm and Smokie are at Worm’s Ice Cream Truck arguing over money. This version is kind of better and besides…I couldn’t find the original on YouTube.)

Oh yeah, I would be remiss if I didn’t include the memorable film sequence from Borat in which Borat drives a bear around in one.

Aside from Pere Ubu’s song “Ice Cream Truck,” I can’t think of too many artists who have sung about the vehicles associated with ice cream – usually it’s music specifically made for ice cream trucks. Dish Recordings’s 1997 CD Songs for Little Ones – which seems to have been produced FOR drivers – is a good example of an industrial answer to a supply question. This brings me to the current fad in indie sound art: producing modern takes on the music for ice cream trucks. Now, I don’t think that Nichols Electronics (the nation’s largest manufacturer of ice cream truck music) has anything to worry about (…at all), but it’s become sort of fashionable – especially this year – to make “new” ice cream truck music. Although it has traditionally been a workmanlike answer to an industrial need – the artlessness of it is probably the very thing that makes everyone feel warm and nostalgic (maybe ask R. Murray Schafer?) – people are now remixing, hacking or otherwise re-framing ice cream truck music, its uses, contexts and meanings into new pop cultural spaces more than ever before.

Erin McGonigle was the first I was aware of. She talked to me about her project as she was thinking it through a few years back. She was later interviewed on WNYC about it (“The Koolman Repertoire, Reinvisioned,” January 2004) and speaks better for herself about it than I could explain here. The program’s synopsis reads: “Sound artist Erin McGonigle shares her latest project: a collection of sounds that may, this summer, make it into the ice cream truck music box.” Erin eventually came up with a series of eerily moodily and evocative sound pastiches and they were all pretty nice. Of all the new jingles she had, my favorite was a bacially straight-up field recording of the “Hungry March Band” playing an impromptu “Turkey In The Straw.” It was just right.

Then, a dark time; the remix languished for a couple of years. But one day, I happened across Xeni Jardin’s coverage of INI Sound for NPR. INI is a Los Angeles deejay team who use an ice cream truck as a mobile sound in the Jamaican sound system tradition. Not so much of a remix as it is a hack, I guess. Anyhow, it was different and awesome:

(ps. Aurelito and Shakespeare, I REALLY want a INI Sound t-shirt, but you don’t seem to have a merchandise section of your site. You guys are bringing two of my interests [Jamaican music and ice cream] together and I want to represent. I’m not trying to put the pressure on, but I’m am sayin’ I wear an XL.)

This year, though, remixing ice cream truck music has come back with a vengeance, as if it were some kind of jingle-chimey Phoenix. The first project I was aware of was Michael Hearst’s Songs for Ice Cream Trucks. Hearst is is a group called “One Ring Zero” and did (I think) this as a side project. His premise? “Are you tired of hearing the same old two or three ice cream truck songs over and over? Michael Hearst certainly is. That’s why he’s created an entire album of NEW songs for ice cream trucks.”

His web page is http://www.songsforicecreamtrucks.com/
Go there now and order one up! It’s the BOMB (pop).

Then, I heard about art collective Suite 405’s call for submissions for an ice cream truck music remix competition called “Ice Cream Headache.” Of course, NPR interviewed them. I’m not aware of who won the competition, but I’ll keep you updated.

Most recently, we have the “Heartschallenger” project.

The project was explained in a May 6, 2007 NYTimes article: “Mister Softee meets his match when Heartschallenger rolls into the Big Apple this month. The powder-pink trucks are stocked with ice cream and global treats served up by Leyla Safai, an L.A.-based artist, and her musician beau, Ben Pollock, who wrote a collection of modern melodies to accompany their arrival (think Good Humor with an electro-pop twist). The couple, who also perform as the band Heartsrevolution, travel wherever the truck is hired to enliven weddings, birthday parties, even film festivals. Heartschallenger also collaborates with local artists across the country to curate curbside exhibitions, show films, play music and share sweets like the artist Gary Garay’s ice pops shaped into peace signs. Next stops: England and France. Go to www.heartschallenger.com.” Yes, that truck’s got a slamming set of rims. And a pretty girl with a sno-cone on the bumper. What more could you ask for? My wife and I have been looking for the pink ice cream truck, but with no success as of yet. We both work downtown so we figure they HAVE to come down…the only question is when. You know I’ll take a picture when it happens.

I’m sure there are more out there…I just haven’t heard of them yet!

As an afterthought, here is a brief and non-completist review of songs with “ice cream” in the title. I kind of doubt whether any of them would work on an ice cream truck, but who knows? Sarah McLachlan, RaeKwon and 50 Cent each had recordings called “Ice Cream.” A partial list of songs with the title “Ice Cream Man” includes Tom Waits, Sloppy Seconds, John McCutcheon, Yukmouth (Feat. 5th Ward Boyz / Fa Sho), John Brim (whose song was later covered by Van Halen), the Tornados and Kevin Roth. My personal favorite is Jonathan Richmond’s song with this title (why, it’s just one of my favorite songs, period). Others have expanded on the theme. Teena Marie had “Mr. Ice Cream,” Blooblo had “Stikki Ice Cream Man,” Biff Bang Pow! recorded “Ice Cream Machine” and the Dynamics had the “Ice Cream Song.” Ginger Baker & Friends had one called “Ice Cream Dragon” while Jefferson Airplane sang about an “Ice Cream Phoenix” (hmmm…maybe this is the year to cover this song). Cibo Matto did one called “White Pepper Ice Cream.” (Which I’ve had – Cambridge MA’s own Toscanini’s had it for a while and it was great; I don’t know how common a flavor it is, so I sort of wonder if that’s where Cibo Mato had it. BTW, Toscanini’s is without a doubt the best ice cream store in the world. If you’re in the greater Boston area, go there and have some, you won’t be disappointed.)

And let’s not leave Fred Waring’s “I Scream, You Scream We All Scream For Ice Cream” out of this; it is a classic of the genre.