ARC intern Dionysius Arya Nataraja comes to us via Bennington College via the Netherlands via Central Java.  He’s just finished up a few months here and used some of his time to explore the ARC’s World Music Collection.  As a scholar of both Eastern and Western musical cultures he offers these observations…

Is music a universal language? Is there such a thing as underlying principle that can be applied for music all around the world?

I encountered a recording of music from West Sumatra, Indonesia couple of days ago. It is titled Night Music of West Sumatra, produced by Smithsonian/Folkways. It is an album of an ethnic group named Minangkabau—or also often called as Minang. Minang are the majority of the population in the province of West Sumatra, which is located in the western part of Indonesia. They speak a language close to Melayu (Malay) and standard Indonesian, which in also based in Melayu.

When I listened to the first track, Padang Magek (Saluang), something immediately caught my attention. Diabolus in Musica! I noticed a musical interval which in Western classical music regarded as the most dissonant and unstable of all. In music, interval is the distance between two notes. Some are consonant, some are dissonant. The dissonant music interval that I found in the recording is named tritone, or often called the devil in music (diabolus in musica).

Something really interesting about this is the meaning that the interval conveys. Music works like language, there are grammatical components which one can manipulate to create various effects and meanings. Interval is one of them. There are intervals that sounds sweet, an example is a major sixth. One can find this interval in the opening of Frederic Chopin’s most famous nocturne, Nocturne Op. 9 No. 2. It gives a sweetness to the melody and gives it a romantic effect.

In contrast to that, tritone has a quality that is generally perceived as harsh and dissonant. In Western classical setting, this connotation is often used to convey something that is unsettling. An example of this is a composition by a French composer, Camille Saint-Saëns titled Danse Macabre. It is based on a poem of Henry Cazalis, meant to describe a figure of Death calling the dead from their graves to dance for him. Black Sabbath also exploit this interval in Black Sabbath opening riff, creating a sense of harshness and rawness. In general, the interval’s connotation is remote from any idea of sweetness.

When I checked the description of the CD track, this song is meant as a statement of love. There are phrases such as “Feeling of love, I ask that you accept them in your heart,” and “My message to my sweetheart is, don’t go back on your promise.” It is surprising that an interval generally perceived as dissonant in Western context can mean something completely different in another culture.

Padang Magek features Zaidir SK on Saluang, a traditional West Sumatra bamboo flute; with Sawir Sutan Mudo and Nurasni as singers. There are three main moods in West Sumatra music: happy, half-happy, and sad. Music that are happy or half-happy are generally metered, and the sad ones are unmetered. This particular track is metered, hence the mood is either happy or half-happy. The way the music works is three musicians function as three layers of sound each has their own role. It starts with saluang laying out the melody, then the first vocal singing the same melody but with rhythmic alteration, and finally the second vocal comes when the phrase almost ends, giving a variation in texture. Sometimes, the first vocal come in a bit late in the middle of flute playing the melody. Although different, this gives an impression of stretto, which is a musical device often used in the writings of J.S. Bach and other baroque composers. Essentially, it is an imitation of a musical theme superimposed when the main musical theme is not finished being played yet. 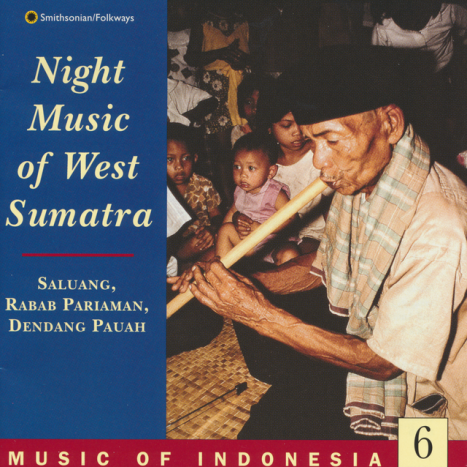 When the vocal enters, the vocal and saluang start to perform a dizzying repeated chromaticism (movements of notes in half step). In the context of South East Asia, it is an interesting musical aspect to have since the region is dominated with pentatonic scale–Javanese gamelan, Balinese gamelan, kulintang of Philippines. There is also a sense of transposition, meaning the shift in the music’s key center. After repeating the chromatic figure several times, the figure is moved a step up. There is a tricky aspect here. “A step up” is not the most accurate explanation as West Sumatra music contains pitches that are not in standard Western tuning. Western music is consisted of 12 tones, but here, the note lies between the 12 tones–microtones. A step up transposition is the closest one can get when explaining this in Western classical terms. Most of the time in Western context microtonality is perceived as something that lies in the field of experimental music and music with complicated calculation and equation. Yet, in a cultural context like West Sumatra, it could be used to convey a common theme like love.

A new listener of this music might have thought that the music is strange and random. Yet, when one listens closely, the music has its own sophisticated system. If it is difficult to grasp it at first, remember that the music of West Sumatra is based on a musical language different than Western music. The musical “grammar” of West Sumatra music works with its own logic, expressing its own cultural condition. Listening to the music in this way could open a new horizon of understanding and a new mode of listening. It leads to a realization that what in one culture seems to be an expression of danger, is heard as something affectionate in another.