Juneteenth marked the final day of ARC @ NYC. Here’s Fred + B (above) finishing a clean sweep of our White St. home of nearly 20 years on White St. 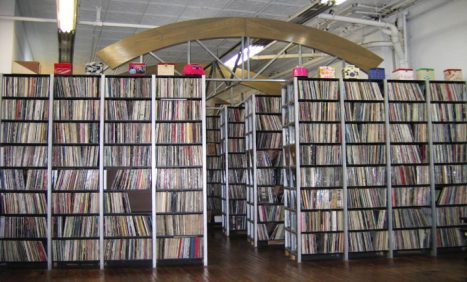 For more than 40 days its been up at 5am, load up the Subaru with the more precious things and then get everything else together for the morning load-in to the big moving van that came everyday at 8. Then 2 hrs upstate to unload the Subaru, and meet and help unload the van. That took till 5 in the evening, then 2 hrs back to NYC to start get ready for tomorrow’s load-in, most nights till 8pm, sometimes 10 or 11. Then the cycle all over again.

Thanks to our great movers, Cory, David, Ray and sometimes Seven.  I should also mention that two separate small vanloads and a driver were donated by artist ESPO (Steve Powers) – a longtime ARC supporter. Here’s a pic of Steve taking down our fab sign he created for us years ago for transport to our new home. 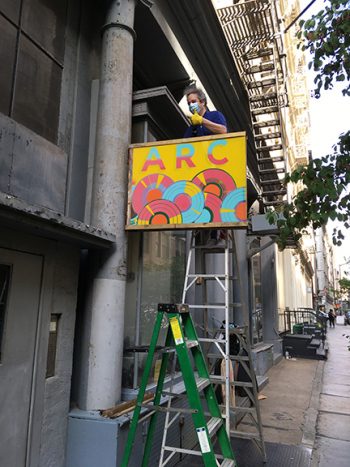 What we thought would be the easiest final months here with plenty of help turned out to be this relentless schedule that needed to be met unfailingly. There were so many wonderful interns and volunteers here in April and we had hired new people. We were planning a final blowout record sale and a dance party in the empty space. Then, BAM! The virus hit. Dorms closed, kids went home. The neighborhood emptied out. Board members vanished.

I packed up alone for 21 days. Then Fred returned and we hired Hooman Mehan, the hardest working man in showbusiness. When the 8pm curfew was imposed that cut into our work time. I slept at ARC for two nights when Soho and Tribeca were trashed by demonstrators and building on both sides of us were broken into. Again we are so lucky in these unlucky times.

The final two load-ins were killer as Fred + B. worked 18 hr days.   It was a marathon of last minute packing and discovery of even more hidden, forgotten, and abandoned things. On Friday June 19 we turned over the keys to the landlord.  Then upstate to celebrate Midsommar with salmon, aquavite and a bonfire.

SO thanks to the Manitou Fund =Nora McNeely Hurley and Michael Hurley and all the other foundations and individuals who helped with the move and contributed major funding; Nina b, Eric Clapton, GC, Ab, PG, Anonymous, Anonymous and Ms. Anonymous, Th Beggars Group. Mike and Corky Hale Stoller and Sam Speigel.

When the air clears we’ll have a party @ the new site.  Look for dropoff locations for your collections in the Hudson Valley, the Harlem Valley, Soho, LA and London in the near future.  Until then…

Sat was the calm after the storm. On the midsummer