Last night’s members pre-sale party went GREAT, thanks to all the members who stopped by, and to all the new members who signed up! Today we’re busily preparing for tomorrow, the first “official” day of our summer sale. It promises to be a grand time in the new space, and we look forward to seeing you all there.

I sincerely hope that everyone’s preparations for the National Day of Stryper are going well. 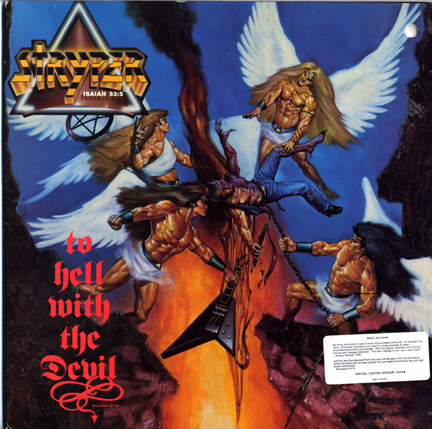 That’s right, it’s time to break out your Jimmy Swaggert prayer cloths because June 7, 2007, or “7-7-07” is fast approaching. Now’s the time to start thinking (or rethinking) how you’re going to celebrate. I mean after all, we’re talking 80s Christian metal from the OC, yo.

I remember back in the 80s when I used to read a lot of metal ‘zines – there was always a Stryper ad wedged in there between ads for The Accused’s Return of Martha Splatterhead, DRI’s Crossover and Ludichrist’s Immaculate Deception. Great albums, these (yeah, the ARChive has copies). And of course, we have tons of Stryper. More than I expected, really. (Bet you didn’t know that To Hell With the Devil went platinum!) For example, I found two copies of the above, To Hell With The Devil with the “limited edition” cover art. Not being the biggest Stryper fan (well, not one at all), I was only familiar with the black cover, so this came as something of a shock. I mean, it kind of looks like something you’d expect from Manowar, right?

Anyway, seeing as how this year’s National Day of Slayer went so well, I will observe 7-7-07 by listening to Slayer, some Kreator…perhaps even a little Mastodon. When you know what your plans are, why not drop them into the comments? We here at the ARChive would like to know.