Not well known in the States, Sonny’s great voice (the only African voice) may have been noticed on Sun City, the anti-apartheid album from 1985 or on the soundtrack of Jonathan Demme’s Something Wild. I had the privilege of doing a remix of the song from the film Highlife for Shanachie Records.  I remember the difficulty we had editing, as the drummer moved the song along as only a human could, somewhat at odds with producing a dance track. 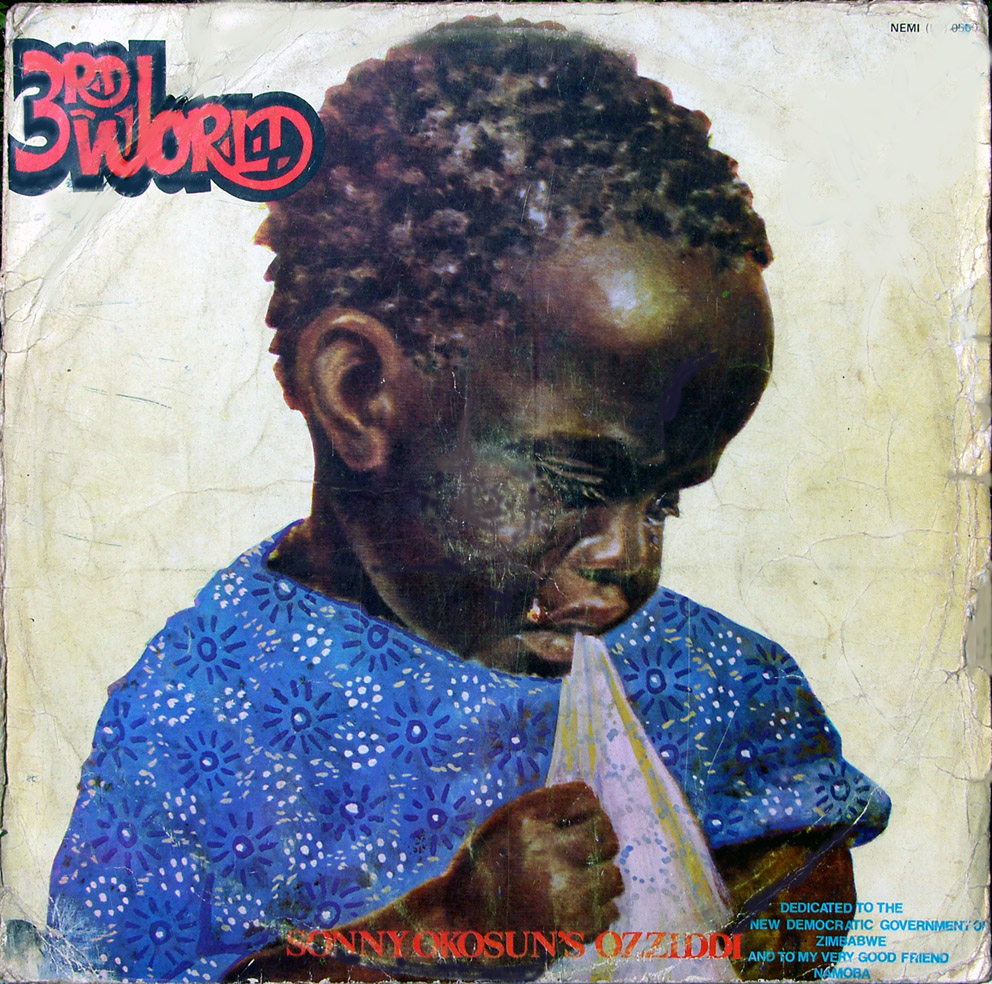 Here’s a profile I wrote in the late 90s and a listing of the recordings we have at the ARC.

In his teens Sonny studied as an actor with the Eastern Nigerian Theater, couching a desire to become a playwright within a Hollywood obsession. He often spent a day at the cinema, and the occasional night after falling asleep in his seat.  Elvis Presley’s Loving You, Cliff Richard’s Expresso Bongo and The Tommy Steele Story made a lasting impression. Misreading the large numbers of adoring on-screen fans as friends, the young Okosun was attracted to this idealized lifestyle. The gift of a guitar in 1964 led to the formation of his first band, the Postmen, in 1966.

The Postmen specialized in straight ahead rock and pop, playing Elvis songs and earning a local reputation for Beatles covers.  With the advent of the Nigerian Civil War in 1967, Sonny moved to Lagos to do design work for a TV station. There, along with everyone else in the capital, he went crazy for American soul and sang in amateur soul groups. 1969 marks the beginning of his professional career with a move to Benin City to play second guitar with Sir Victor Uwaifo’s Melody Maestros, a prominent Highlife band. Uwaifo taught him composition and provided practical experience on the ins and outs of earning a living as a musician. Flying back from a Japanese tour in 1970, Sonny purchased instruments at a London stopover – gear necessary to form his own band being prohibitively expensive and difficult to come by in Africa. He also picked up a new set of Western influences while in the UK, launching Paperback Limited in ‘72, a mix of Eastern (Bendel) Highlife and the underground sound of Santana, Hendrix, Creem and Traffic.

While Sonny was successful, he felt that his music is still not very distinctive. He returned home to Enugu and came up with a roots music based on his Esan (Ishan) culture. He renamed the band Ozziddi after an Ijaw river God and christened his sound “Ozziddzm”.  His first song in Ozziddi style, “No More War”, was a hit, as were his next three albums, Ozzidi, Living Music and Ozzidi for Sale, all of which sold over 100,000 copies. His fourth LP, Papa’s Land (1977), did even better. The title cut, a funky Highlife number sung in English, preached a militant gospel of African rule “from Cape Town to Cairo”. The LP also contains one strong Afro-reggae song, “Rain”, attesting to a blossoming interest in reggae, and a back cover quoting the Old Testament, an affirmation of his born again Christianity.

EMI, impressed with Papa’s Land, sent the band to London in 1978 where Sonny recorded his next two LPs at Abbey Road studios, the home of his boyhood idols, the Beatles. (Sonny claimed to have used nearly half the Beatles titles for his own compositions, one of which, “Help” was a big hit). “Fire In Soweto” is a well produced Afro reggae title cut that showcased Sonny’s warm, rootsy voice. The English lyrics allowed the message of freedom to reach beyond Nigeria’s borders and made Sonny a star throughout the continent. In 1980 “Fire” flooded West African airwaves providing the soundtrack for Samuel K. Doe’s Liberian coup. That same year Sonny was the first artist to take the stage at Zimbabwe’s independence celebration.

Exploring the language-oriented calypso form, he next cut an LP with Explainer, calling the style Afro-Carnival. Shifting gears again, Sonny flirted with a disco sound on “No More War” on his 1980 Third World LP, with many of the songs again incorporating reggae stylings. The title cut stressed the Afro over the reggae to produce his most satisfying effort to date. Sonny delights in the airiness of reggae – the large empty spaces that allow room for the words – as attractive as it’s religious and political tendencies. Okosuns’ gift is hearing Africa’s perfect pitch on it’s return trip to the motherland; in New World rock, reggae, funk, black American dance and Caribbean music. The follow-up, The Gospel According to Ozziddi, was a shaky disco effort. Okosuns has toured the world, including a visit to Cuba and a sold out concert at New York’s Apollo theater in 1984.

Songs of Praise from 1994 (we don’t have) was sort of a comeback that sold nearly a million copies. It heralded a Christian twist.

A nice discography is at:
http://biochem.chem.nagoya-u.ac.jp/~endo/EAOkosun.html

You can get a great assortment of the releases on CD from our pals at Sterns, so visit them at http://www.sternsmusic.com/discography/6411