Ah, Spring – ribs, crocuses, baseball.  Opening day, and an old man’s fancy turns to the sports section of the ARC.   This year, have a look at one of the honorific anomalies of the musical world, “Go Fernando.” 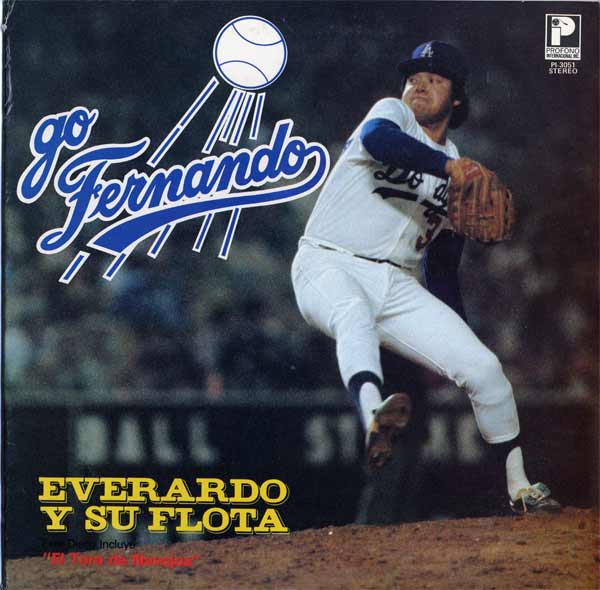 I don’t know much about the Dodgers, just that the recent owners had bad family values, and they are valued at two billion.  Oh, and that they were hijacked out of New York once-upon-a-time and worked one of the most despicable fiddles in urban history, using public domain to seize a Latino section of LA, Chavez Ravine to build their stadium.

But in 1981 Everardo Y Su Flota, and a great deal of the sports world, would focus on the Dodgers and a 20 year old Mexican-American rookie pitcher, Fernando Valenzuela.  Why Fernandomania?  That year “El Toro” (the Bull) pitched and won on opening day, won 13 games despite a players’ strike, was the first rookie ever to lead the NL in strikeouts, had five shutouts in his first seven starts, was Rookie of the Year, first rookie to win the Cy Young Award, Pitcher of the Year, and helped defeat the Yanks in the World Series.  More remarkable is that Fernando is still active, mostly DH-ing in 2011 in the Mexican Leagues.

OK, the recording.  Everardo led a solid, ordinary Latin group from Chicago who found little to sing about in their Cubs or Sox.  They couched this nearly seven-minute medley (popurri) in choruses of “La Bamba” (a son jarocho) with three segmented songs in varied tempos, “Sonora Querida,” (a sentimental cancione), and two corridos, “Maquina 501” (about a heroic train engineer) and “El Morro de Cumpas.”   The LP cover is better than the song; the release reminding us of the pride the Latin community took in sharing the success of one of their own.

Musically, you can learn more about Chávez Ravine from Ry Cooder’s 2005 LP, and visually from Don Normark’s photographs.  By the way his screwball was called “Fernando’s Fadeaway,” and lordy, no one thought to riff on “Fernando’s Hideaway?”   Maybe by Billy Crystal?