home » blog » Paris, Back in the Hoose Cow

Quelle pauvre! Paris, she is going back to the slam! I thought I might commemorate the event with a list of “prison” songs (Don’tcha Hear Poor Mother Calling, Paris?). However, we have SO many albums with a prison theme, and so many songs with the word “prison” in the title, that sorting through them all would take more time than I can give today.

I decided, then, to quickly peruse the list and limit myself to one representative album that captures the moment. An older record by someone Paris might be able to relate to. A record from someone both wise and strong; someone who could be Paris’s mentor, confidante and friend once she finally gets out of the joint for good. But which album to choose? Johnny Cash’s Fulsom Prison Blues? WAAY too obvious. Plus, he’s dead. Social Distortion’s Prison Bound? Naah. I don’t think Mike Ness would put up with her shenanigans. Besides, I don’t think they’d have so much in common. What I wanted was a record by someone Paris might actually see herself in. Then, in a moment of epiphany, I finally found my answer: Cher.

Turns out, Cher is an eerily appropriate choice, and here’s why. In 1979, Cher recorded and released the album called “Prisoner.” Of course we had a copy (two, in fact!), but check out her “outfit”: 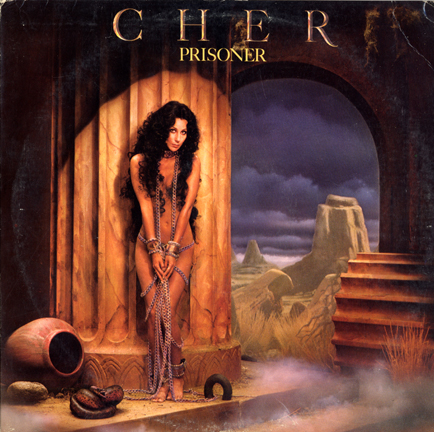 That’s hot, right? Not as hot as her picture on the back of the album, though:

I totally think I’ve seen Paris somewhere wearing the exact same thing…but where? Regardless, I think if we take a closer look and take a moment to do some quick math, we will see why this album fits the moment, and why Cher might be the one person in the world best equipped to show Paris how to save up all her tears.

Let’s see…both Cher and Paris make wardrobe choices that tend towards the revealing, both have made hit albums (Cher’s got bunch, Paris has one [which wasn’t the worst thing I’ve ever heard]), both are best known by a single name and now, both have some kind of “prison” experience (in her song, Cher was a prisoner of love; Paris was initially a prisoner of her own fame, but now that she’s dropped her appeal, she’s doing time for reals, yo!)…carry the two…I think the point is that Cher found the strength to move on (she sang it out) and based on that experience, I think she’s got something that Paris might want to avail herself of when she gets out of the hoose cow. Whether Paris will look to this obvious source of help, though, remains to be seen.

Hang in there, Paris! Some of us are actually pulling for you!