This Indi Day I found a few very nice blues LPs at a flea market upstate. Above; here I am shopping in my usual 4th outfit.  Below; some records I found. 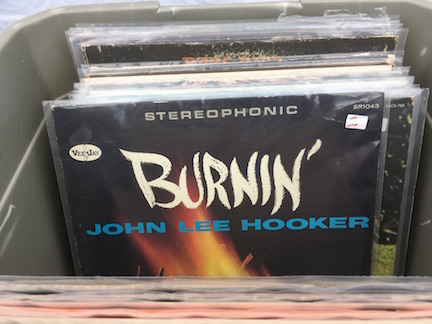 Like all good Americans I also watched the latest Independence Day film this weekend and reveled in the truths it espoused.  One All-American scene was especially moving.  Here’s the set up: Aliens have destroyed the worlds satellite communications.  Searching the basement of Area 51 they come across some mothballed radar gear.  So the temp Pres sez, “ This old radar was supposed to go to the Smithsonian.  They never picked it up.”

So, Because it was left there, because it was saved, the world is saved.  THIS is why we started the ARC.  Well, maybe not to save the entire world, but at least a few nice pieces. We just didn’t understand why so much great music was not being preserved by the larger, more established, lazier institutions!  We are the largest popular music library in the world because, “We pick up.”

OK.  One more thing .  A joke.  What did one American flag say to the other American flag?  Nothing.  It just waved…