Maddux Pearson, a graduate student at NYU, has been working at ARC to lay the groundwork for a database and image gallery of our memorabilia collections. Here’s his take on one of the nice things he discovered in the very first of a 100 or so boxes he will be looking at…

As I lifted a teeshirt out of the way I discovered three copies of a small booklet inside a plastic sleeve. They were intimate, mimeographed booklets by Ric Ocasek, the late frontman of the Cars.  Titled “Troublizing,” and referencing Mr. Ocasek’s solo album of the same name, these were 8 pages of poetry from 1997, handmade in an edition of 250.   The kicker was they were signed by Ric and stitched together by his then wife Paulina Porizkova.

As someone whose knowledge of Ric Ocasek was limited to his work with the Cars and production for bands like Weezer, I was immediately intrigued by its abstract, greyscale cover juxtaposed with the name of its popstar creator. It seems that I was not alone in feeling this; when Howard Wuelfing at Columbia donated these booklets to ARC, he included with them a note to its director explaining them punctuated by an emphatic, “No shit.” This series of poems is filled with evocative imagery (i.e. “twitching wildly/twelve birds/heading for fire”) and what seem like Ocasek’s personal musings (i.e. “lyrics are/confused fragments/of interconnecting/thoughts”). Each poem is lain against a greyscale, sometimes-altered image of modern life, creating a sobering mood. 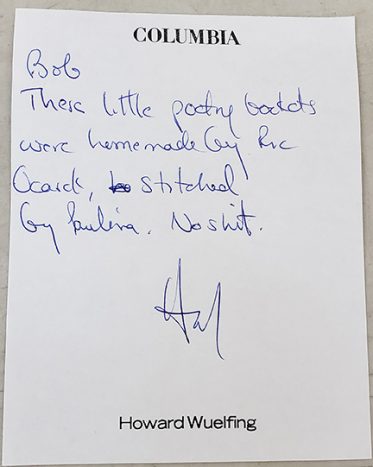 PS esz B – Look for one of these little gems at Heritage Auctions, November 16 in Dallas, along with third copies of some of ARC’s rarest posters and handbills.