Since joining the ARC team as an intern in July, I’ve been busy listening to, translating, and researching the Internet Archive’s collection of over 300 Russian 78rpm records. My Russian-immigrant family’s story and culture were always fascinating to me, and I wanted to complement the intuitive knowledge acquired through immersion in my family’s ex-Soviet culture with academic study of Russian and Soviet music history at the University of Chicago. With this modicum of expertise I set out to make this collection of records as accessible as possible.

I approached the Russian 78s expecting to find certain songs, like the played-ad-nauseum Kalinka, which has even managed to find its way to American NHL game playlists. I happily tackled, however, what turned out to be a wonderfully rich and diverse collection of music. Another welcome surprise was the relatively robust market for Russian music in early twentieth-century America, as evidenced by the American releases of many of these records. Those which were not domestically released have been translated from their original Cyrillic, and all have been annotated with (hopefully) useful information to guide your listening and aid in your research, should you undertake any. Below are my efforts at constructing a snapshot of this remarkably comprehensive collection. 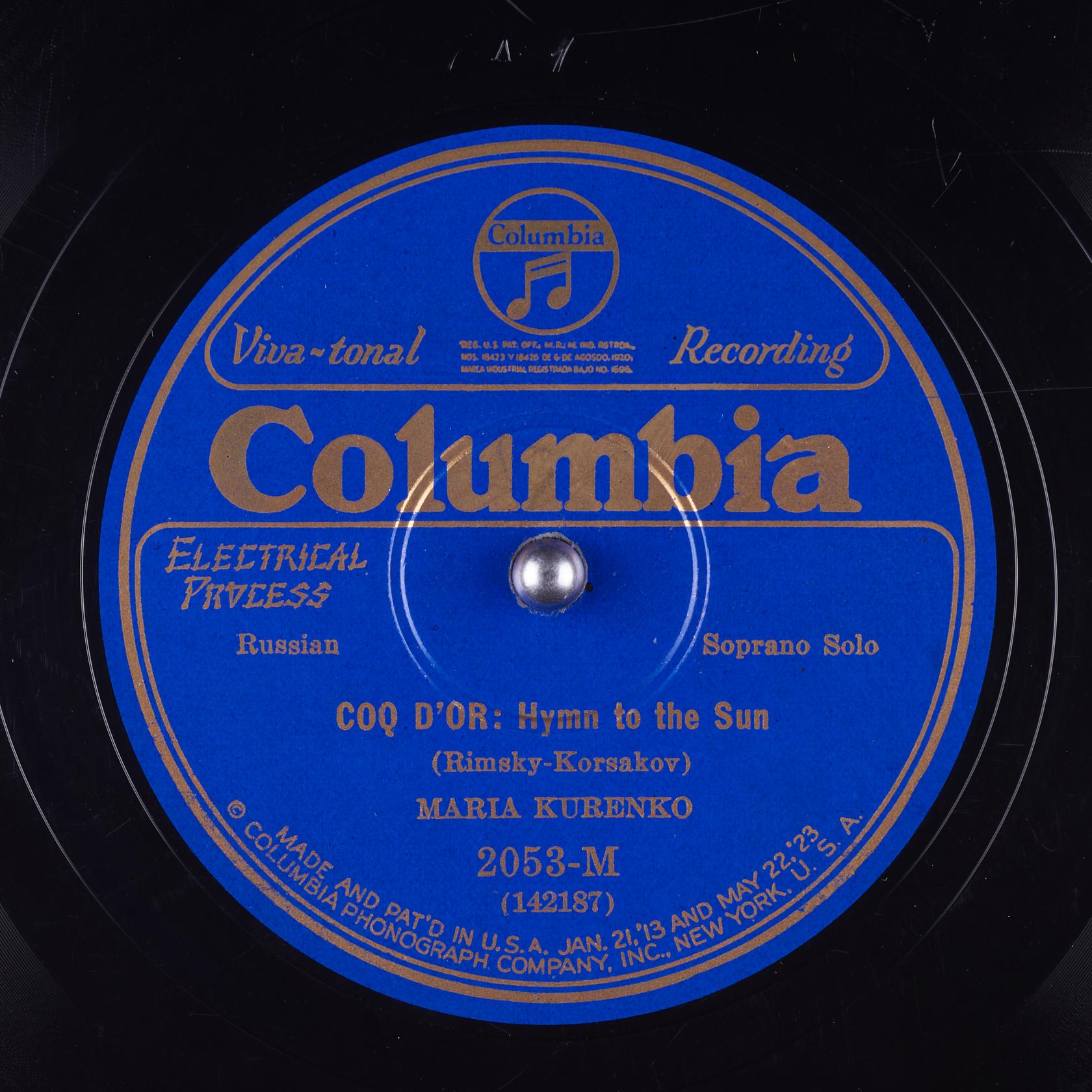 When you say “Russian music,” I—like any other nerdy, piano-playing, first-generation child—think of the giants of Russian classical music whose greatness has been instilled (indoctrinated) in me for 20 years. Indeed, you’ll find excerpts from Tchaikovsky’s Orchestral Suite Op. 55 No. 3, an abridged version of Rachmaninov’s Piano Concerto No. 2, and a movement from Prokofiev’s Suite No. 2 from Romeo and Juliet in the Internet Archive’s collection. But you’ll also come across works by lesser-known classical composers, such as the members of The Mighty Five, who are beautifully represented by arias from Borodin’s Prince Igor and Rimsky-Korsakov’s Golden Cockerel (image above). A discussion of Russian arts would be incomplete without mentioning ballet; fortunately, the Internet Archive has not only classics like Tchaikovsky’s Nutcracker, but some rare finds as well. Selections from Nikolai—not Alexander—Tcherepnin’s Le Pavillon d’Armide and Reinhold Glière’s The Red Poppy are excellent windows into the traditions of pre-revolutionary and Soviet-era ballet, respectively. Aram Khachaturian’s study of Armenian folklore culminated in his 1942 ballet, Gayane, several excerpts of which can be found in the collection. 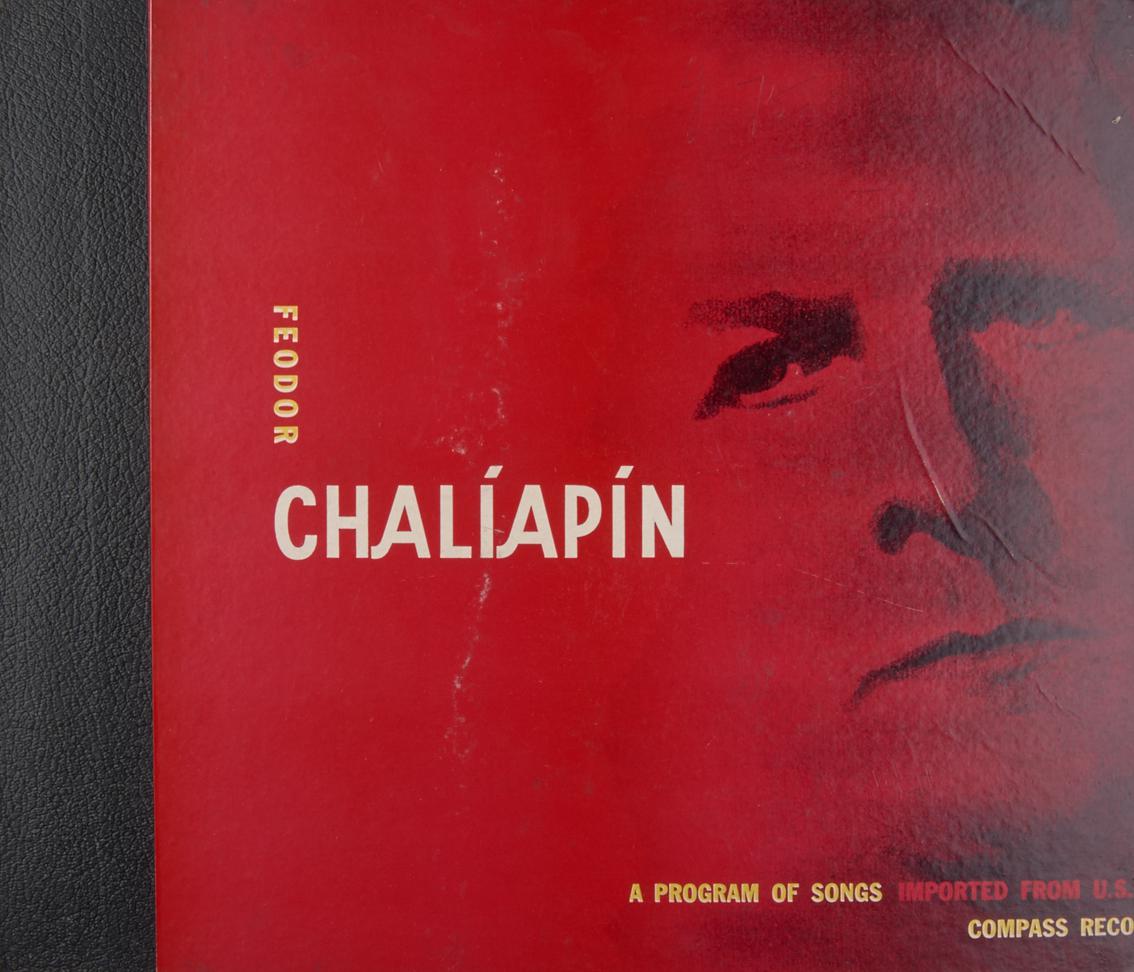 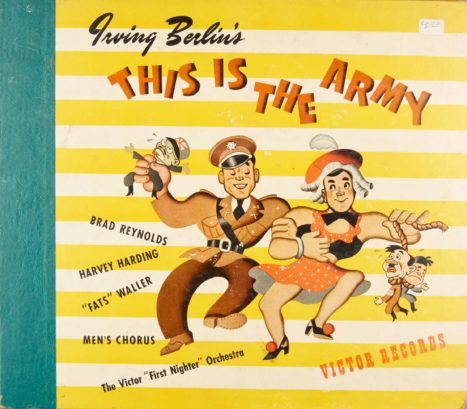 An internationally acclaimed product of the Russian classical music world was Feodor Chaliapin, a preeminent opera singer of his time. Chaliapin sang in theaters as grandiose as La Scala and the Metropolitan Opera and under conductors as revered as Arturo Toscanini. His importance in the context of this collection, however, has more to do with his commitment to traditional Russian music. Thanks to Chaliapin’s standing in the classical world, he was able to elevate and spread the Russian folk genre—a career decision not unlike that of recently deceased opera star Dmitry Hvorostovsky who regularly programmed recitals of traditional Russian music and Soviet war songs.  A prime example of a Russian folk song with a global trajectory is Song of the Volga Boatmen, of which there are over a dozen recordings in the Internet Archive. Chaliapin’s recording (image above) proliferated widely and inspired many vocal and instrumental covers, the most memorable of which is certainly Glenn Miller’s. Song of the Volga Boatmen lived on as a musical signifier synonymous with Russia in a song from Irving Berlin’s score to This is the Army (image above), a morale-boosting war musical. A direct quotation of Song of the Volga Boatmen appears in the refrain of That Russian Winter, Berlin’s ironic account of the Nazis’ meteorological struggles as they attacked Russia. Through the Internet Archive’s Russian 78 collection, we begin to make sense of how a folk melody published in a song-book in 1866 by Mily Balakirev—of the aforementioned Mighty Five—ended up in a 1942 musical by Irving Berlin. 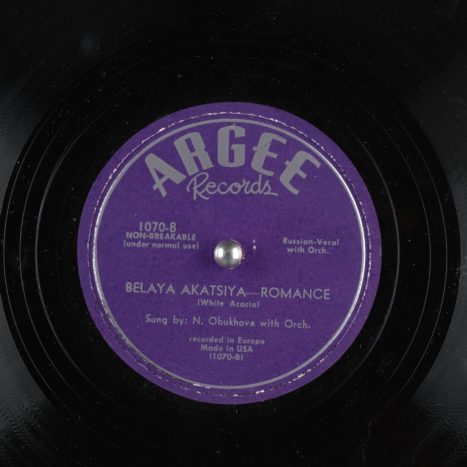 Chaliapin’s discography also serves as an introduction to the Romans, Russia’s take on the European art song style, like the German Lieder and French Mélodies. Though a flexible definition, an art song is usually a song for voice and piano set to an independent text (one that is not part of a libretto of an opera or other staged work). Incredibly enough, the Internet Archive has recordings of Nightingale, the most famous work of composer Alexander Alyabyev, who is credited as being the father of the Russian Romans. As was the case in European art song traditions, major composers of high Russian art music also wrote in the subgenre referred to as Klassicheskij (Classical) Romans; a beautiful example is Chaliapin’s recording of Tchaikovsky’s I Bless you, forests (Op. 47 No. 5) set to a poem by Alexey Tolstoy. The Tsiganskij (Romani) Romans subgenre is also well-represented in the Internet Archive’s collection. The contrast between the melodramatic tango of Oh, These Dark Eyes and the lyrical melody of White Acacia (image above) encompasses the style well. A distant cousin of the Romans is the tradition of the prison song—Blatnaya pesnya—a precursor to a style known today as Russian Chanson.

My initial dread of reviewing 80 versions of Kalinka, Katiusha, etc. was mitigated by the wealth of Russian folk music available in the Internet Archive. The folk genre enjoyed great popularity in Soviet times thanks to its status as the proletarian counterpart to allegedly bourgeois art music. The Alexandrov Ensemble, (known in the United States as The Red Army Choir), was a choir, orchestra, and dance ensemble founded in 1928 as a military-affiliated performance group affectionately referred to as Russia’s “cultural paratroopers” by today’s officials. The international recognition that the ensemble received allowed for the recording of albums like this one (image top of this blog), which introduced the world to some of Russia’s most popular folk tunes. Meteliza, translated as Snowstorm, Blizzard, and—quite creatively by some labels—as The White Whirlwind, was a signature song of the Alexandrov ensemble, appearing in many of their American-released albums. Another folk classic and a visual as well as musical symbol of Russia is The Young Birch Tree, also a favorite of the Alexandrov ensemble. 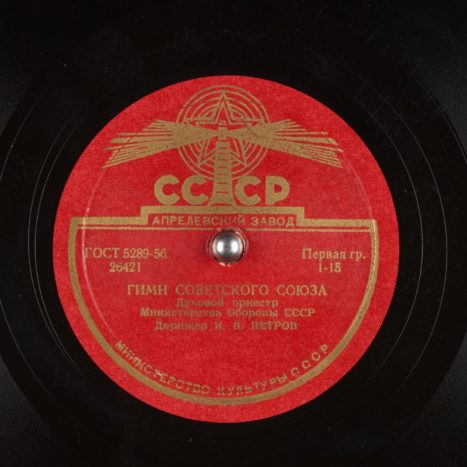 Folk music aside, the rest of the Alexandrov Ensemble’s repertoire consisted mainly of Soviet mass songs, which carried considerable weight in the Soviet propagandistic effort. The mass song label can be applied to many of the songs written throughout the early Soviet and Stalinist eras, when Socialist Realism as the state’s idealized, officially imposed art form was in full swing. Generally, mass songs were heroic and patriotic in content and simple in musical composition so as to be accessible to the masses for whom they were written. Song of the Plains is characteristic of the genre and appears frequently in the Internet Archive collection, including several Alexandrov Ensemble recordings. An unexpected cover of Song of the Plains was that of Paul Robeson, an American actor, lawyer, and activist who was fascinated with Soviet culture and recorded many mass songs with partly translated lyrics. No discussion of patriotic Soviet music can omit the iconic national anthem, of which the Internet Archive has two instrumental versions (one image above). We also get a little snippet of the anthem of the Russian Empire at the end of American cornetist Herbert Clarke’s 1909 Russian Fantasie medley. 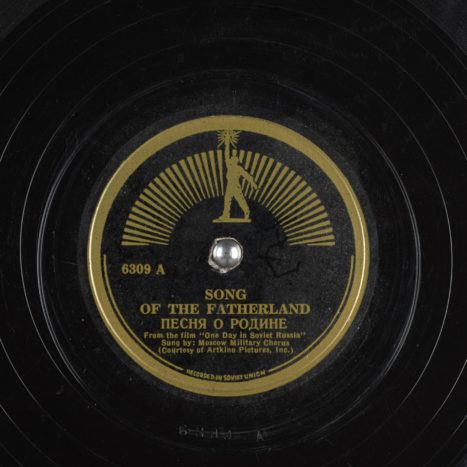 Mass songs were often written as components of film soundtracks. Composer brothers Dmitry and Daniil Pokrass are well-represented in the Internet Archive’s collection, which includes recordings of their patriotic songs from the 1938 drama If War Breaks Out Tomorrow and the 1940 documentary One Day in Soviet Russia (image above). An iconic and highly successful Soviet film composer was Isaak Dunayevsky, whose collaborations with director Grigory Aleksandrov became some of the most popular early Soviet films. Jolly Fellows, a musical film released in 1934, featured the March of the Jolly Fellows and Heart, sung originally by Leonid Utesov. What is perhaps Dunayevsky’s most famous song comes to us in the form of another Robeson cover: Song of the Motherland from Circus, a musical comedy directed by Aleksandrov and released in 1936. Epitomizing the Socialist Realist message of the film, Song of the Motherland became a quasi-anthem of the Soviet Union. Dunayevsky also wrote Birobidzhan for the 1936 propagandistic melodrama Seekers of Happiness, whose aim was to persuade Soviet Jews to relocate to the supposedly idyllic Jewish Autonomous Region in southeastern Siberia.

From Romanticism to Socialist Realism, Alyabyev to Khachaturian, Chaliapin to Utesov, Russian music is as broad as Russia itself. A complete collection of Russian music is a thought-experiment at best, as is a complete collection of just about anything. That said, the Internet Archive’s collection of digitized 78rpm records offers a glimpse into many of the avenues within Russian music. There are styles I haven’t mentioned above—liturgical music of the Orthodox Church, Klezmer music from Russian Jewish communities, and folk dances of various ethnic minorities within the Russian Empire—and those genres which I have discussed are infinitely more complex than any overview could ever portray. This incredible collection of original recordings will prove a great starting point for researchers and casual listeners alike, and it has been a pleasure to work on this project.