home » blog » Rock Around The Blooper

Meanwhile, back in the jungle…

Freddie’s really been kicking ass, sorting through mountains of 45s for weeks now. Every once in a while he’ll unearth a comedy single which is my meat! When this beauty bobbed to the surface we had to spin it, like forthwith, no tomorrow-style: 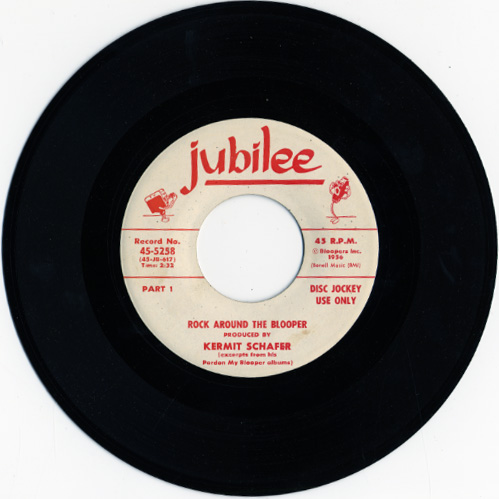 A white label deejay copy, Jubilee 45-5258, Rock Around The Blooper, parts one and two. But dig, students, it’s billed as excerpts from Kermit Schafer‘s milestone Pardon My Blooper LP, (and sports the familiar cartoon imagery from the cover) but it is in the form of Buchanan and Goodman‘s classic break-in masterpiece The Flying Saucer. It’s a break-in blooper record! Does that flip your wig, or is it just me?

It’s a strange concept. Is it an answer record? Hard to parse. It plays just like Flying Saucers; deejay narration cut in with snippets of rock ‘n’ roll and, like the man says, excerpts of Kermit Schafer’s bloopers. The editing is pretty good on the whole, snappier than any of Schafer’s other product which makes me wonder if he didn’t get someone to cut this for him.

Ol’ Kermit took a lot of hits over the years for his authenticity problem. Namely, that many of the hilarious “bloopers, fluffs, slips, boners and goofs” he collected on his records were actually staged by Mr. Blooper himself. Some of the clips were real, some he found it necessary to re-create. But he never indicates when this happens. This means Kermit gets a line on a legendary screw up via one of his radio engineer buddies, and it’s really choice, he’s gotta have it. But there’s a catch – no tape! So he lovingly fakes it and tells none of this to the saps that buy the record. As it turns out, not only did he do this for events where there was no recording extant, but also for shit that never happened. One of the latter was the Sonny Tufts incident which experts agree never happened. Too long to tell the story with any justice here, you’ll have to read about it on Snopes.com. One funny thing about our single here is “Sonny Tufts?!?” becomes a recurring tag line through both sides and with no context to tell us why it’s funny! We have to buy the Pardon My Blooper album to hear the whole (completely phony) joke. Most of the other drop in bloopers are spoonerisms which need no set up.

You may debate whether any break-in record is truly funny; accepting the limits of the genre, this is a pretty good one. I think the original Flying Saucer record will always be the best. But if you don’t actually slap you knees, break-ins can have a manic charm that is unique and which evokes the golden age of rock ‘n’ roll deejays which sadly is gone. Except for Rex on WFMU, of course.