By the time the 4th of July rolled around the ARChive had cataloged over 8,000 CDs since the begining of the year.  This landmark has never been reached before in the annals of the ARChive.  It helped that we received so many CDs from Universal Music and huge collections from several private donors.  It also helped that we have had so many great interns to catalog them.

What ho and hey!   It is only the middle of the year!  If this activity keeps up, the ARChive could possibly catalog as many as 15,000 CDs this year! 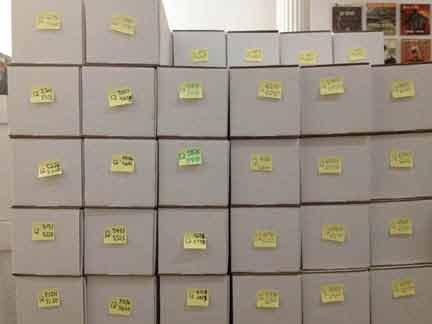 some 2012 CDs, cataloged, boxed and ready to be shelved…

However, here at the ARC we are running low of CDs to catalog.  Maybe only a few hundred left.  So we need your help.  Please go through your CDs, pull out all last years models, you know, the CDs you don’t listen to anymore, or maybe the CDs given to you by your talented friends that you may never listen to.  Maybe you have second copies of some titles.  Or perhaps you have ripped all of your CDs to a hard drive and/or cloud and you don’t want them taking up space in your apartment.  Bring these unwanted CDs to the ARChive, we can always use them.

Maybe you work in the music business.  If so, surly you have hundreds of CDs lying around your office that you have no use for.  Maybe you are a promoter and have titles by artists you no longer work with.  Maybe you are in the A&R aspect and you are often sent independent CDs by fine young artists looking for a real record company, but they don’t make the grade enough for you to sign them.  Or maybe the guy in the office next door was fired/promoted/transferred or for some other reason no longer works in that space and it has teetering towers of CDs all over.  SEND THEM TO THE ARCHIVE!!  If you’re in the New York area, and you have a whole lot, call us to arrange a pickup.  Ask for Fred @ 1-212-226-6967   or e-us,   fred (at) arcmusic (dot) org

Don’t forget that ARC is a not-for-profit and that any donations made to it will result in a break in your taxes (provided you fill out the proper forms, of course!).