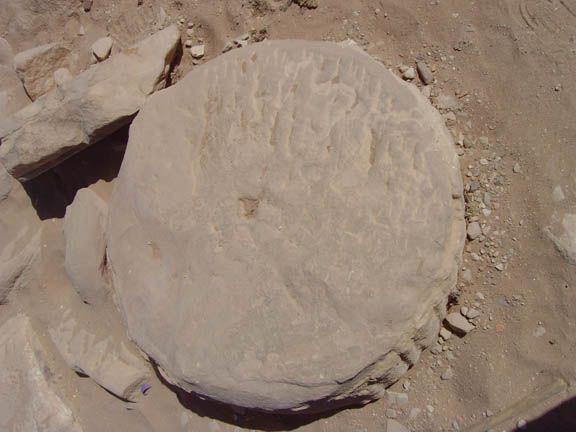 It is a little known fact that the ancient Nabataeans were early adaptors of new sound recording technologies.  They began with cylinder discs (called columns) but found them awkward.  Later, around 70 BC, they sliced the cylinders into wafer thin segments, well thin for the time, and began recording on the flat side.  Thwarted by a region-only spindle size and fierce competition from the Hittites (every tune a Hitt!) and the Phoenicians (the original Purple Reign), they were soon forced out of the market.  Not to mention the freight, as these babies were 33 1/3 tons.  Alas, here at Petra, unshipped goods, in a format that defies migration, linger still. 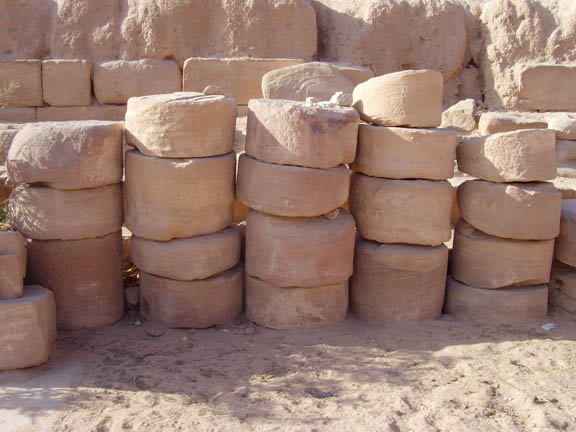 But, I may be mistaken about all this.  What I do know is that the walk through Al-Siq, and the first glimpse of the Treasury through the slice of rock, luminous pink curtained black, is a remarkable thing and well worth a trip through time. 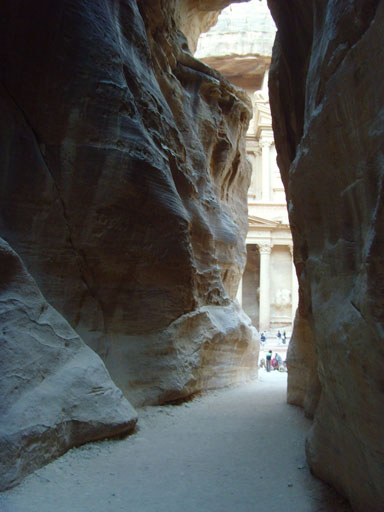 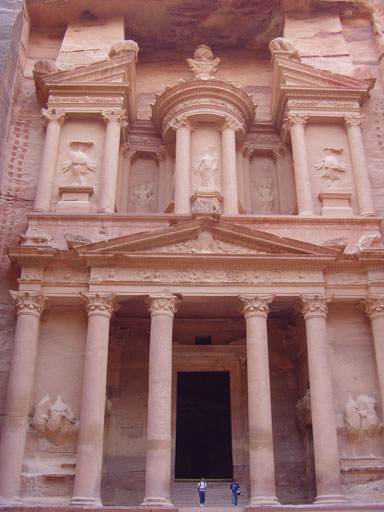 All I can think of is our last administration, and the inability to tackle any problem successfully, and how everything was ‘hard work”   Please.  Have a look at Ajunta, Machu Picchu, Angkor Wat, Petra.  Imagine signing off on 40 years to carve a rock facade and we can’t rebuild twenty rows of wooden shotgun houses in New Orleans!   Disgrace, I mean I digress.

I’ve spent the last 10 days here in Amman Jordan setting up the first stages of Muslim World Music Day (formerly the Muslim Music Crash Course) at Columbia Universities Middle Eastern Research Center.  It has been a whirlwind of meetings, show-and tells, planning, report writing and visits to archives, schools, libraries, embassies, musicians and government offices.  The project director handling things from Jordan – the man with ALL the contacts – is Kareem Talhouni.

If you don’t know, Muslim World Music Day is an attempt to catalog all the relevant recording in the world, in one day, and surround this core database with informational and entertaining content, online.  Read all about it at our pre-website blog  www.arcmmcc.wordpress.com 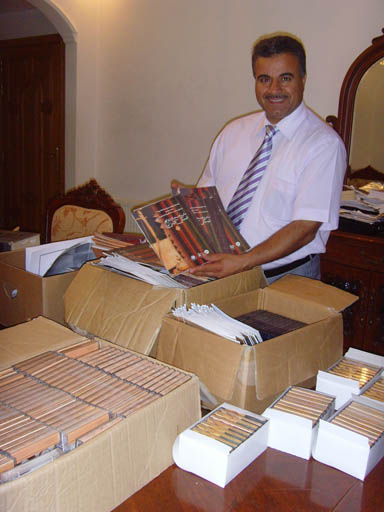 One nice find was a thesis, written in English, but only published in Arabic, on Jordanian music, written by Prof Abdel Hamid Hamam the Dean of the College of Art and Design, University of Jordan.  Written in Wales no less.  We will excerpt it in both languages on the Muslim World Music Day website.

Equally amazing is the work of Dr. Mohammed Taha Ghawanmeh , Music professor and Dean of fine art @ Yarmouk University, Irbid, Jordan.  Dr Ghawanmeh has spent his life collecting the traditional music of Jordan, and the result is a 500 cassette edition, each cassette one hour long and accompanied by a booklet of lyrics, notation and explanatory notes.  This is hard work at its very best.  Only two sets of the series now exist and I can only hope that some scholars or universities that read this could find this work useful for their institution of scholarly pursuits.   Here’s the contact for the fine arts dept :  fac_finart@yu.edu.jo and Arabic speakers can call +962 79 574 3535

By the way on the road to Petra I has coffee, and after a 800 step climb rested in a rock solid tea room overlooking the rose red monestary.  Life used to be so hard… 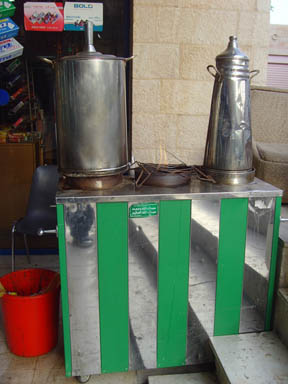 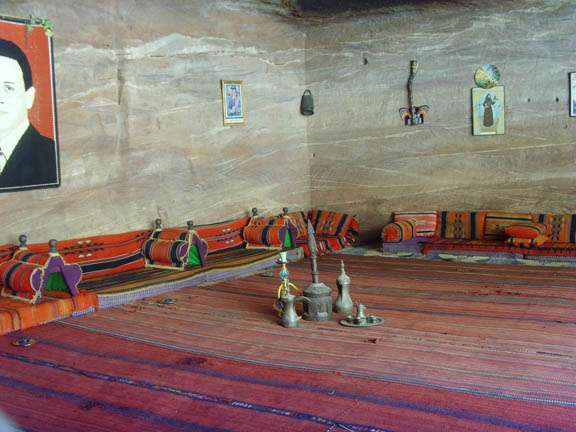 My favorite reaction to the project was from a woman at the Center who wanted to know if every whore and slut who parades nearly naked on the TV, shaking her stuff, and singing in Arabic would be a part of the website.  She then showed me a few of Nancy Ajram’s videos (mild by my standards) and then exclaimed with a smile, “This is my favorite!”  And shaking her shoulders, “I love to dance to this one.”   Hey, Nancy was on Ophra last month!

With downloading so prevalent and pirating commonplace, music shops have all but disappeared in Jordan – one small chain, The Music Box, holding its own.  Plus the visual versions are very seductive as DVDs and music on TV predominates.  Live music is scarce in formal performance.  This photo is from a concert at Al Hussein Cultural Center taken by Robert Reeder, an ex pro photographer visiting Amman.   Musically, it was the kanoon playing of Tewfik Mirkham (sp?) that was luminous. 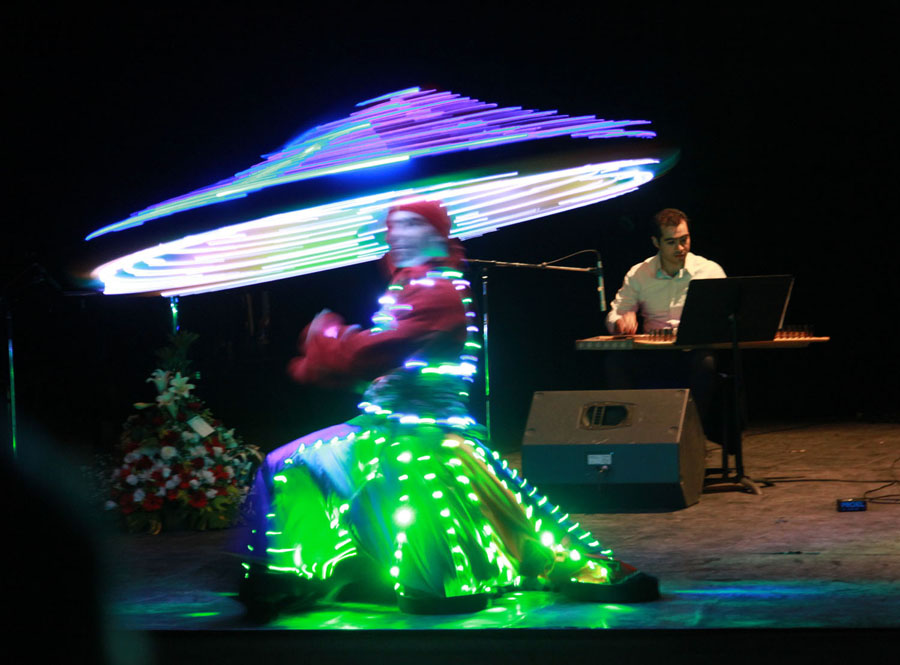 My endless search for actual music collections was finally rewarded on the last day of my visit to Amman with a trip to The Jordan Radio and Television Corp.   Our animated host, Ms. Hala Zureiqat, Director of Jordan Television, listened to our pitch, conferred with her Director, then nearly shouted, “We’re in!”   What has made this trip rewarding is that so many people in the region are willing to support the Muslim World Music Day –  a new idea, on first hearing – so enthusiastically.

In one of the rehearsal rooms we were treated to a short concert by 73 year old singer Mohammed Wahib – sweet, toothless and energetic.  The song is, “Slaima.”

The station has saved nearly its entire history since the 60s on reel to reel tape, and it is mostly catalogued.  The recent past is digitized and can be called up inhouse, electronically.   But for me the real fun was to finally see some real vinyl – 45s, LPs and a full shelf unit of approx 4,300 seventy-eights.

We will work to make sure this material is cataloged for the project and who knows what trash or treasures we will unearth.  Maybe an early Nabataean disc?