Summer is almost gone.  A change of seasons.  A change of heart.  Plans.  Memories. “To Everything There Is a Season.”
Which leads me to this.  One of our favorite donors, Nina b, dropped this drawing off  recently.  As a 12 year old the lady was gaga over George Harrison.  Nina has donated voluminous notebooks done by her and her friends when they were kids.  Page after page devoted to why George was the one for her.  This above gem, by Clare at age 8, was drawn for her pal Nina in 1964.  Sure it’s ‘cute,’ but what’s the code in those floating images?
So we asked a few prominent shrinks we know to comment.  Most wisely declined.  One anonymous response read, “All I would say would be what great symbolism between the milk bottles (female) and the cigars (when is a cigar just a cigar and what is it doing here?) beautiful work!”  OK, if milk bottles are female, why do they look like male genitalia?  Others in perplexia said, “wallets?”  I’m asking why George has cans of Green Giant stringbeans on his hands?  And why the Semitic right-to-left order of the Beatles albums?
Worth a ponder.  Here’s another treasure from the era – the first set of 40 postcard-sized story boards about attending a Beatles concert.   And Mr. Freud, this is a dream sequence… 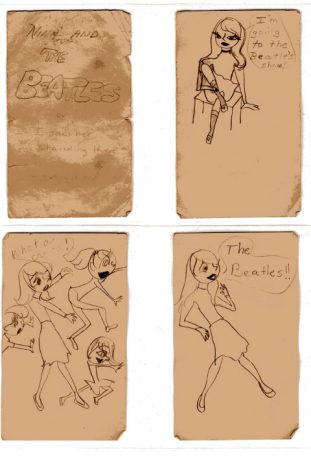