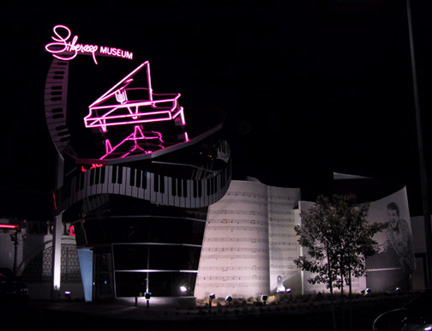 It is with a heavy heart that we must announce that the Liberace Museum in Las Vegas will close on October 18, 2010.

In the 50s Liberace was on our TV, the candelabra was on the Steinway, and my family took delight in the fact that his brother was named, “George.”  (Then again there was an equal affinity for wrestler, Gorgeous George).  Libby died in 1987.

The museum opened in 1979.  Since then fishy economics and a diminishing fan base have led to its demise.  Or maybe his subtle musical approach and plain demeanor were no match for today’s Vegas.  So they’ll pack away the world’s largest rhinestone, and de-neon his humble Tropicana Avenue stripmall tchotchke forever.   Rumor has it that Lady GaGa is eying up the space. (every clothes horse deserves a stable…) 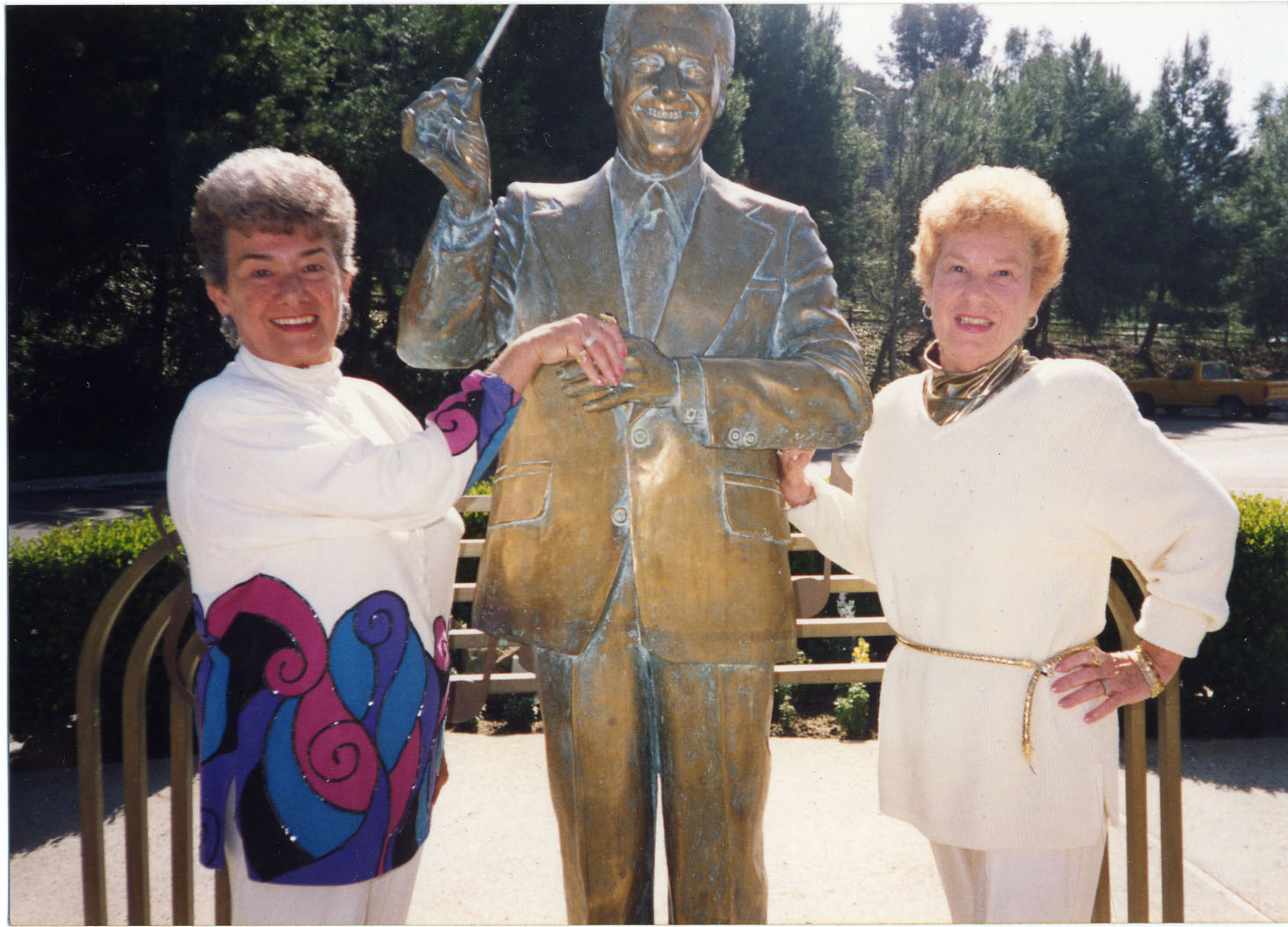 Of course glamorous women have always gravitated to the desert; here’s me Mum, (on your right), who never missed a chance to pose with a slightly tarnished maestro on one of her various jaunts in the desert.  Here it’s the “Champagne Music Maker,” Lawrence Welk” at his last Resort and Museum in Escondido.

Edifice lost and inexplicable wardrobes remind me that on Weds (Sept 22, 2010) Caribbean artist Arrow died.  He had been living in Puerto Rico because in the mid 90s the eruption of the Soufrière Hills volcano wiped out his home and his clothing shop, Arrow’s Manshop Boutique on the island of Montserrat.  We all know and love the hit, “hot, Hot, Hot,” but there was a whole lot more. 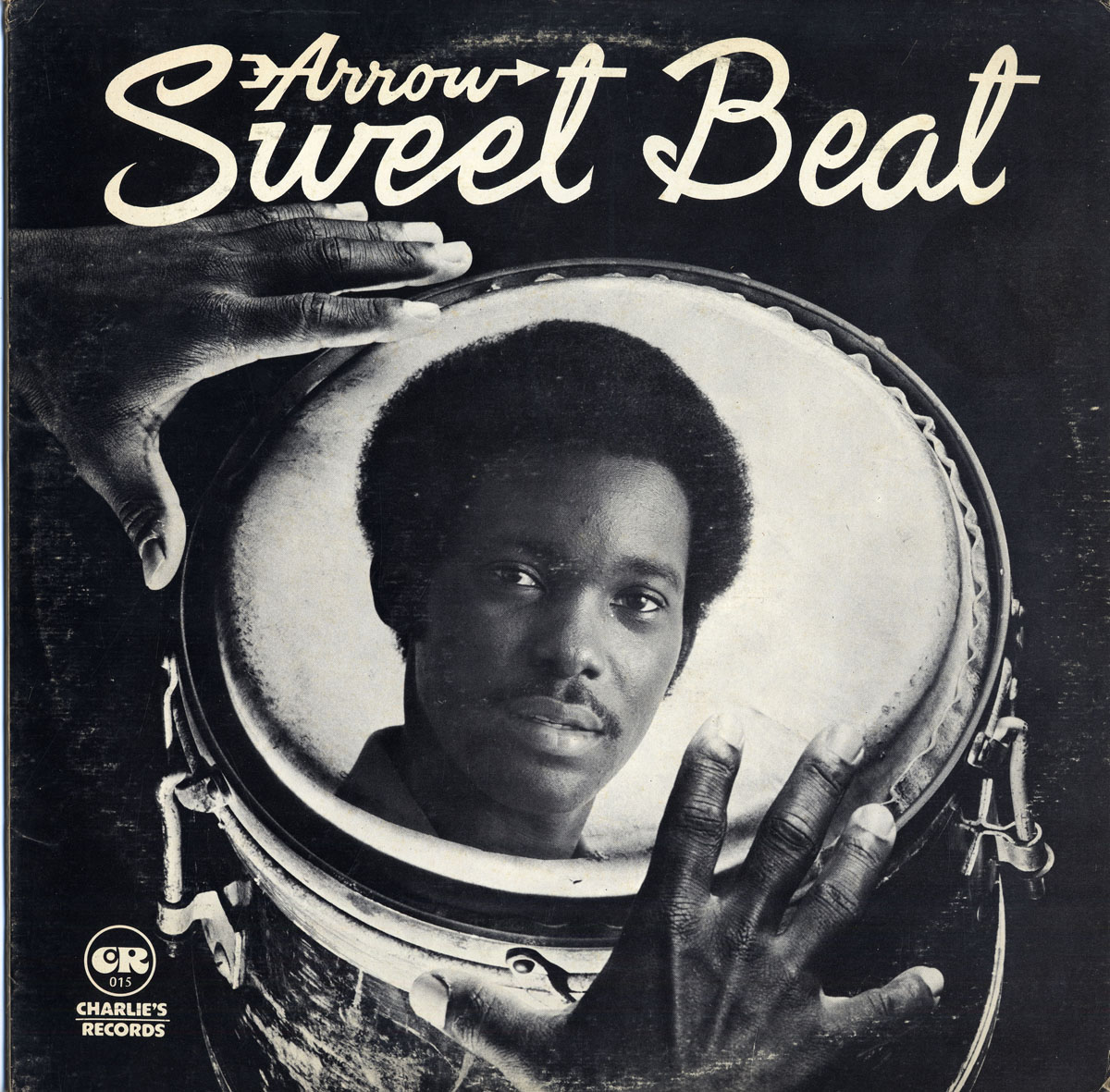 I’ve attached a profile I wrote on Arrow in 2007, so pardon the lack of updates in this hast to post.  Uh, somehow, we lost our database of Liberace recordings, and, umm, the dog ate our Welk material, but we’ll end with a discography of the 31 Arrow recordings we have here at the ARChive.

Creator of the most recognizable song ever to emigrate to the “West”, Arrow’s party anthem “Hot, Hot, Hot” is the Carib equivalent of “Louis Louis”, but with even fewer words.  Since Bob Marley, and prior to the recent success of rap/dancehall acts, Arrow is the only artist from the English speaking Caribbean ever to rack up the multi-million sales figures to rival American pop stars.

Raised on the tiny Leeward Island of Montserrat, Arrow was the youngest of nine children.  Like most kids he was exposed to pop, rock and soul over the radio, while the local music scene was dominated by Trinidadian calypso.  He performed his first calypso’s when as a 10 year old he began competing in his school’s talent contests, delighting in improvised ‘picong’, or ‘stinging insult’, a form of derision leveled at a rival to disillusion him and delight the audience.  When a teacher remarked that his barbs went ‘stinging like an arrow”, the name stuck.  After finishing school Arrow displayed great business acumen and financed his career through a series of ventures like breeding pigeons (the 300-400 birds earning him a new nickname, “The Pigeon King”) and rabbits, working as a barber, making rubber stamps, selling insurance and eventually opening his own clothing store, Arrow’s Manshop Boutique.  All this enterprise proved necessary, because although he had won his island’s Calypso King contest in 1971 and for the next 3 years running, a recording contract failed to materialize.

His world view was forever changed on a visit to Trinidad in 1971 when he went to see top Calypsonian the Mighty Sparrow for advice.  Pointing to a room full of unsold records, it boiled down to a few words, “Be different”.  Originality aside, there were other problems with nearly every aspect of the music business surrounding Calypso.  First, the short marketing season from Christmas to Carnival limited air play and sales.  Lyrics while often brilliant, were much too topical or sexual to reach beyond the island, filled with local reference and slang.  On the performance end the artists seldom had the money to rehearse or keep a band together, leading to house bands, lowered standards, and endlessly recycled melodies.  Lastly, few artists owned their own compositions or collected royalties.

Arrow’s first singles appeared in ‘72 and the first LP, On Target in ‘75.  He published his own music and financed his recordings, making the producer a wage earner rather than the owner of the master tape.  Since Montserrat was closer to the French Antilles than it was to Trinidad, Arrow began incorporating cadence into his music and toying with ways to distinguish himself in the crowded yet insular world of calypso.  This was more a conscious attempt at a mini-internationalism and universality than merely adding flavor by incorporating exotica.  In ‘75 his theories paid off when “Monique” became a modest hit in Martinique and Guadeloupe.  From now on each LP would have a few songs infused with the rhythm and spirit of another territory – something for everyone that would increase the chance for sales in a variety of markets.  “Monique” was also his first non political/non topical song, reinforcing the notion that local themes were seldom exportable.  Another jolt of reality hit in 1977.  Prior to this time the Calypso King and Road March competitions in Trinidad were open to all – that is until it looked as if someone from another island was about to win!  When Arrow’s :”Roll Back” and “Tourist Leggo” by Antigua’s Short Shirt went head to head for top Road March honors, the Carnival Committee changed the rules to exclude ‘foreigners’.

Exasperated, Arrow made an even stronger commitment to forging a hybrid that would work throughout the Caribbean.  Using soca as a starting point, Arrow emphasized the bass and tassa bell driven rhythm section even more, and in a shameless bit of dated modernism added a disco feel and longhaired rock guitar solos.  On tour he would travel with Clarence ‘Oungku’ Edwards, (leader of the once and future Burning Flames) who played bass and guitar player, Christopher “Columbus” Newland (one of the few White musician in calypso/soca), adding local brass for shows.  In the studio he enlisted the best arrangers, originally Ed Watson (of Brass Circle) and in ‘83 Leston Paul, and rehearsed a tight band that often included Frankie Macintosh.  The result was a party act that was always ready to tour, reliable and professional.  This rock soca functioned like any dance music with diminished lyrical content, repetitive phrases, call and response choruses, and as many gimmicks as needs be to get an audience moving.  Arrow himself worked the crowd by constantly crisscrossing the stage with rock star involvement, setting himself apart from most calypso singers who still stood stage-center, singing to the microphone.  While Arrow was criticized for downgrading calypso by abandoning language for rhythm, disco soca beats and simplistic anthem songs are now an established part of Mas in Trinidad.

Fewer songs have been as long-lived and internationally recognizable as “Hot Hot Hot”.  When it first hit in ‘83 it became an instant classic – a chant that any sweaty crowd regardless of geography could claim as their own.  It moved beyond the world of Caribbean DJs and into college dorms when former NY Doll Buster Poindexter released the note-for-note cover version on RCA, and later sang it on an episode of “Miami Vice”.  The song has been recorded in 12 languages, made the charts in the UK and Holland, featured in the films “My Stepmother Is An Alien” and “Man From Africa”(1983), was the World Cup theme song in Mexico (1986), staged as the opening production number to the 1989 Miss Universe Pageant, provided the theme for CBS TV’s “new season”, and used to market Kentucky Fried Chicken, Pizza Hut, Miller Beer, Tropicana orange juice and ‘94 Toyota’s on TV.  While “Hot Hot Hot” was originally released in Europe on Chrysalis in ‘83, and as a single by them in the US in ‘84, Arrow’s debut LP on a major American label did not happen until sales of 4 million and Buster’s version inspired Mango to take a chance in 1988.  A cover still resonated enough to hit #3 on the UK dance charts in 1993.  It would be safe to low ball sales at 8 million.

The success of “Hot Hot Hot” allowed Arrow to put together a touring show and band called the Multi-National Force in ‘89, expanded to include a full brass section and still featuring guitarist Newland.  That same year he was awarded an MBE (Member of the British Empire), a high civilian honor just short of Knighthood by the Queen of England.  Other accomplishments include being the first soca, let alone calypso artist on “Soul Train”, the UK’s Top of the Pops and Terry Wogan Show (UK personality host similar to Johnny Carson), and at Reggae Sunsplash.  Arrow is one of the few soca or calypso artists to maintain an active, worldwide touring schedule.  Recently he has performed in Ghana, Morocco and Japan.  Dividing his time between Montserrat and Brooklyn, he’s been given the “Key to New York City” for his contribution to the city’s cultural wealth.  He’s not the only member of his family to compose and perform, his brother Justin (“Hero”) wrote one of the Caribbean’s biggest hits “Tiney Winey”, and another brother Lorenzo, once performed as ‘Young Challenger”.  Gearing up for the next generation is Arrow’s six year old son who’s already appeared on Broadway and in TV commercials.  With the volcanic action on tiny Montserrat in the late 90s, Arrow, like most of his Islandmates, lost everything he has built there and may never be able to return.