Just back from Miami and Havana, as I’ve been working on Cuba Music Week (May 14-22) and was invited to see the Stones in Cuba.   OK, they’re old, but hey, I saw James Brown bounce when he shoulda been in a rocker, and no one picks on old blues guys.

I’ve seen the band three times: 60s, 90s and now.  Got to say this was the best sound (couldn’t hear a thing in Detroit in 1964), best crisp stage + screen views, and best ambiance.  Overcoming age in my own right, it was 90 degrees and I stood for 8 hours with no bathrooms.  The band gave a great show starting with “Jack Flash” and ending with “Satisfaction.”  2 hrs 15 minutes non-stop.  300,000 (my estimate-tops) folks of all ages and nationalities sang along.  A bit of a surprise actually that so many Cubans knew the words, but then again the songs are not arias. But then again few songs are as iconic, unrelenting, capable of speaking to any generation as “Satisfaction.” 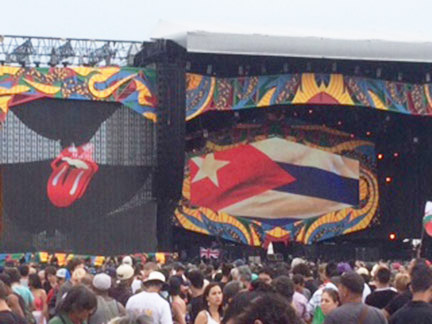 For the Stones a bit of a vindication, as they and most rock kept off the airwaves since the revolution and not allowed to perform in Cuba.  The only large public event by a major non-Cuban pop artist before this was by Julio Iglesias.   So the kids were ready.

The stage set up was fab, and as I mentioned I could hear every note and every word.  The band sounded great and looked like they were having fun. Mr. Jagger’s voice was much better than what I remembered from the 90s concert.  He prances and you ask, ‘why?’  Then you think, ‘why not?’

No bathrooms, no vendors, no police, no drunks, no merch, no cell service, no fights, no crowding and free.  Try that in the USA.