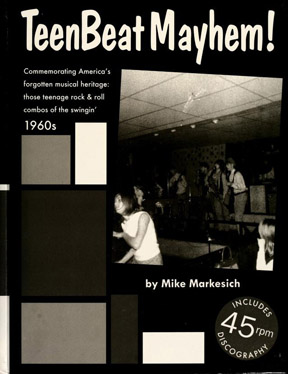 Modern scientific thought states that the universe was created after a tremendous explosion: “The Big Bang Theory.” According to Mike Markesich, rock’n’roll had it’s own “Big Bang” in America. That “Bang” was The Beatles’ performance on the Ed Sullivan show on February 9, 1964. Soon after that, teenagers all over the country bought guitars and formed bands. It seems that every single band that ever formed in the wake of The Beatles first appearance on American TV is noted and celebrated in Markesich’s fabulously researched tome TeenBeat Mayhem! Commemorating America’s forgotten musical heritage: those teenage rock & roll combos of the swingin’ 1960s. It is an exhaustive, inclusive and definitive account of pre-hippie rock’n’roll—before LSD ruined it with pretentious endless soloing in the name of “art;” and big business ruined it when it realized that there was money to be made and watered it down.

After acknowledgements (a tribute to Greg Shaw, who pioneered the study of sixties music back in the seventies, is a nice touch), TeenBeat Mayhem kicks into full swing with about 36 pages of history of what Markesich calls “teen beat” music. For the uninitiated, “teen beat” music can be described as that made by a basic four-piece rock ‘n’ roll combo featuring guitar(s), bass, drums and a singer. A keyboard and/or a saxophone may augment it, but rarely a full horn section. Among aficionados, the best recordings are crude, featuring a snarling vocal backed with a pounding beat and a hot guitar riff. Songs that have charted and you may have heard include “Dirty Water” by The Standells, “Talk Talk” by The Music Machine and “96 Tears” by ? and the Mysterians. Most people know this music as “garage rock” these days, but he’s the guy who did all the work here, so we’ll humor him. The history is a fascinating look at how the above noted “Big Bang” of Beatlemania fanned the flames of regional rock ‘n’ roll acts, transforming surf and frat bands into original British Invasion-influenced groups. The Rolling Stones, The Animals and The Yardbirds were also the source of much inspiration. The history connects the dots through the release of Nuggets, Lenny Kaye’s 1972 inspirational compilation of teen beat tracks, right up to the revivalists of the late seventies and early eighties (The Cramps, The Chesterfield Kings) and the current market glut of endless bootleg compilations of rare 45s.

Then we move on to the meat of the matter: The Discography!

When the book was conceived, it was originally supposed to be a definitive listing of teen beat records. Twenty years later—all of that time spent on researching records, photos, local newspapers and the Library of Congress, and consulting with a cabal of record collectors—the book morphed into more than merely a list of titles and names taken from old scratchy 45s (no long players are listed, as teen beat thrives best at 45 RPM). It includes a very brief description of each song (ie, “moody driving punk rant w/ organ”) and a ranking system, based on how good the record is according to Markesich and his many colleagues who helped him with his research. Also noted are the date of release and the city of origin, if known. Only listed are songs that fit the “teen beat” mold. For instance, the book shows The Buckinghams with seven independent releases before the band added a horn section and became a pop group on the Columbia label. Also, fifties rocker Gene Vincent’s fuzz-guitar-drenched 1966 stomper “Bird Doggin’” is listed, but none of his earlier or later material.

There are sidebars galore, all of them interesting; an addendum to the main discography; a list of every song noted (about 14,800 of them!); a section on bootlegs and repressings; and much, much more. The book’s penultimate section features label scans of the TeenBeat Mayhem Top 1000 Garage Songs of all time. Compiled by Markesich and his people, the scans are shown in descending order. This is where you know that the book was not compiled by a bunch of elitist creeps who only care about records that are intensely unobtainable. The Number One Record on this list is not so rare that you’d have to mortgage your house in order to buy one. Although many of the records in the Top 1000 are extremely hard to find (indeed, some exist only as acetates), the Number One Record is “You’re Gonna Miss Me” by The 13th Floor Elevators. It’s a great song and certainly worthy of the top position; yet it can be obtained for as little as $25.

If there is a flaw in the book at all, it is that there is either, no index of the Top 1000, or that the Top 1000 songs are not listed with their respective ranking in the main discography. If one wanted to see if a particular record made the Top 1000, one would have to go through about 50 pages of label scans.

Although the book is professionally printed and laid-out, it is basically a guy doing it himself (much like many of the records catalogued within) and there are several mistakes. A sheet of corrections is included and Markesich hand-corrected many of the mistakes on each book himself (he is THAT concerned with accuracy!). But that does not distract from the value of this book. For someone interested in this music, this is an invaluable reference book. If you collect these records, you absolutely need this book. You will find yourself referring to it frequently.

Teen beat or garage rock, it really doesn’t matter what you call it. TeenBeat Mayhem is a terrific source of information regarding this brief period of American recording history and Mike Markesich should be commended for conceiving, developing and delivering this outstanding result of quality research.

Read more about it here: http://www.pricelessinfopress.com/home.html

ps: ARCster Bill Levay, just back from the ARSC confab, reports that TeenBeat Mayhem has won a Certificate of Merit, in the “Best Research in Recorded Rock Music” category, 2013 ARSC Awards for Excellence.