Yesterday, Ariel Hyatt of Ariel Publicity donated nearly 1200 CDs to the ARChive!! For the rest of the day, Bryan, Diana and I went through them to determine what we needed and what we could sell (The ARChive sells the third copy of any item that enters its domain). Result (numbers are approximate): 1100 CDs will be added to the ARChive—including more than 150 second copies and about 75 that need to be checked against stuff the ARC already has. 150 CDs were designated as third copies that will be put out at the ARC’s upcoming fund-raising sale—including titles by REM, The Deftones, Sheryl Crow, Lionel Richie, Lil’ Cease and The Caulfields (The Caulfields had that cool song, “Devil’s Diary” with the immortal line, “Just one girl who says I’m bigger than Jesus now.” I guess you gotta hear it.). 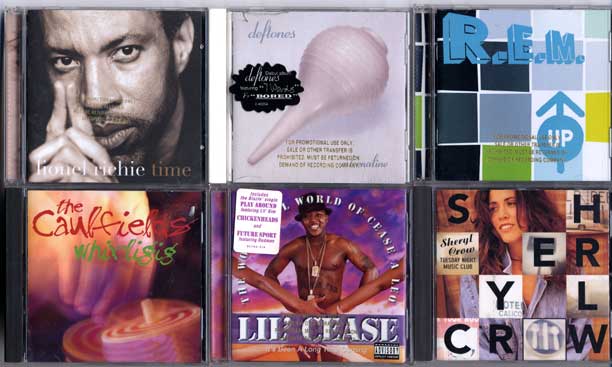 So when is the next sale, you ask? June 23 to July 1 here at the ARChive of Contemporary Music, 54 White Street, NYC, from 11 AM to 6 PM everyday. Thousands of CDs, LPs, 45s, cassettes, posters, books, videos, younameit, will be on sale at that time. Plus, there’s the very swell ARCmart, a veritable thrift store of groovy items ranging from vintage clothing to designer kitchenware. Come out and buy some swingin’ rekkids and support The ARChive.

Once again, thank you Ms. Ariel for the great donation!