As you all know yesterday, August 24, was Ukrainian Independence Day (Day of the National Flag). It just so happens it was also the day that the Daniel Jan Walikis Collection was delivered here at the ARC.

This collection of more than 2000 LPs and 78s celebrates American Polka music, with about a quarter of the recordings devoted to Eastern European and Balkan national song, religious, brass band, folk and traditional music from Slovakia, Bulgaria, Czechoslovakia, Hungary, Moravia, Germany, Austria, Russia, and of course, the Ukraine. The collection served as the basis for Mr. Walikis’ European Ethnic Melodies show on WHRW (Binghamton, NY, University’s radio station) from 1988 until Mr. Walikis’ death in 2012.

So in honor of this special day, both here and in the Ukraine, we hoisted a few glasses of Khortytsa (Хортиця) Vodka (made with “magic water’ from that southern Uke island) and listened to a few Uke LPs. The gem above, while not quite ELP, bills itself as “the first electronic Ukrainian album of its kind.” No argument there. You can hear Electro-Nova’s “Three Suggestions” (Go to the bottom of page and click) 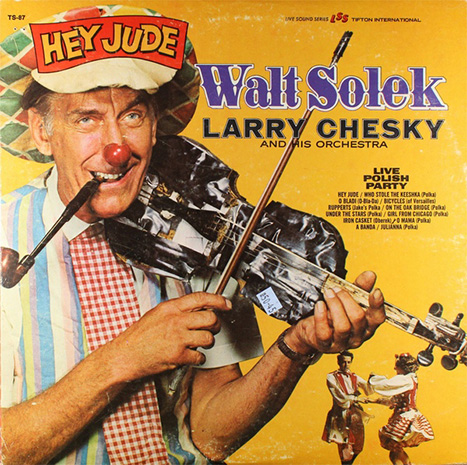 Forgive us for always being drawn to the more unusual stuff, but geeze, how can you ignore a polka versions of “Hey Jude” by Larry Chesky?

Thanks to Ms. Rosemary Walikis for this generous donation and to Jason Isaac who got a crew together – Rebecca Spokony, Phil Hazen and Sarah Gager – to pack up everything for us! As we process the rest of the recordings look for an upcoming gallery of great covers and the entire collection cataloged and characterized on our Special Collections page.