On September 16, the great saxophonist Big Jay McNeely passed away. It would be remiss of The ARChive if we did not bring him to the attention of those who may have missed his contribution to the world of music. His wild, frantic, uninhibited style of saxophone playing, beginning in the late Forties, helped shape rhythm & blues music and formed the platform on which rock’n’roll was built. Today, he is mostly forgotten, but in his time, he was influential and legendary. Thus, his 78 of “Deacon Rides Again” (Imperial 5170; 1952) is in our window.

Cecil James McNeely was born in Los Angeles on April 29, 1927. He studied the saxophone under several LA tutors and learned about music theory, harmony and scales. His first group as a teenager included future jazz luminaries Sonny Criss and Hampton Hawes. McNeely was highly influenced by the tenor sax solo of Illinois Jacquet on the 1942 recording of “Flying Home” by Lionel Hampton (Decca 18394; 1942). Although the solo was not technically fabulous—like those of Lester Young or Coleman Hawkins—it was exciting in its simplicity and exuberance.

McNeely would take that concept several steps further by honking and squealing and adding extreme showmanship to his appearances. He would fall to his knees, lay on his back, walk around the venue, even go out into the street, all the time blowing the wildest saxophone ever.

This photograph by Bob Willoughby captures the excitement that Big Jay McNeely can generate. Look at the teens, banging on the stage, and the policeman watching from the shadows; Big Jay McNeely on his back, sweating and blowing, man, blowing! 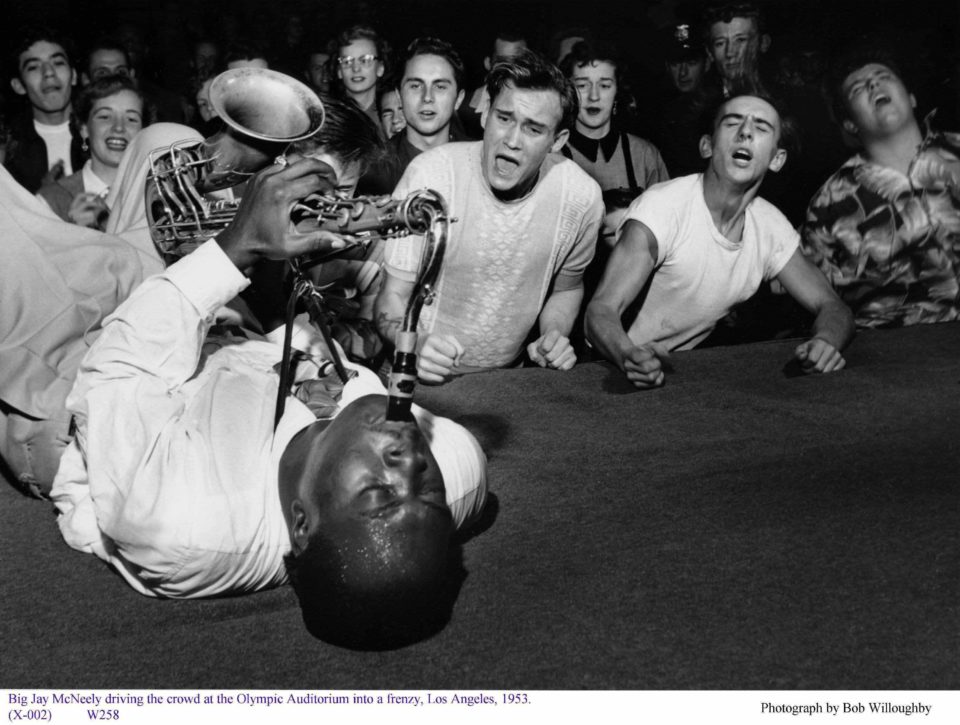 During the late Forties, McNeely worked at the Barrelhouse Club in South Central Los Angeles, where Johnny Otis’ orchestra was the house band. Otis, a drummer, vibraphone player, producer, impresario and talent scout–whose discoveries of R&B talent are too long to list here–asked McNeely to join his band. McNeely made his first recordings with Otis for the Excelsior label in 1947. This brought him to the attention of Ralph Bass, a producer for Savoy Records, who signed him up. His “Deacon’s Hop” (Savoy 685; 1948) was a Number One R&B hit in January 1949. Although he really wasn’t tall or large in stature, Savoy Records dubbed him “Big Jay”—perhaps for his big sound. Noting the popularity of McNeely’s art, several saxophonists followed in his footsteps, including Red Prysock, Sil Austin, Rusty Bryant, Chuck Higgins and Joe Houston.

Through the Fifties, McNeely toured heavily and recorded for about a dozen labels, including Federal, Imperial and Vee Jay. In 1957, during a stand at the Birdland Club in Seattle, Washington, one of his sets was recorded and later issued as an album. The version of “Flying Home” is done at a manic, punk rock-speed and can only provide a hint of how electrifying his live shows must have been when he was at his peak. [A teenage Jimi Hendrix frequented the Birdland, which was known to have underage shows during the late Fifties.]

Before Chuck Berry made the guitar the main instrument of rock’n’roll—cemented forever by the British Invasion—a wailing saxophone was crucial to most rock’n’roll records; even many rockabilly acts and just about every surf instrumental group carried a saxophone player. The prominence of the guitar put saxophonists like Big Jay McNeely out of business. By the mid Sixties, it was rare to hear a saxophone on a rock’n’roll record—only such soul acts as Junior Walker & the All Stars kept the saxophone as the predominant instrument. Also, by the early Sixties, R&B had evolved into soul music–although McNeely‘s sound is based somewhat on gospel music (ie, the references to “deacons”), it did not translate well.

McNeely carried on the best he could, but by the Seventies he was delivering letters for the U.S. Mail for a living.

The Eighties, however, saw a rhythm & blues revival. Big Jay was brought out of mothballs; he toured and recorded more than ever before. Europeans reissued his recordings and featured him at big festival shows. We’ve seen McNeely perform in the Eightes and Nineties and each time he put on a tremendous show. One of his day-glo saxophones is on display at the Experience Music Project in Seattle, but, alas, no such honor exists at the Rock and Roll Hall of Fame.

Big Jay McNeely, who was one of the last living links between the jump blues of the Forties and rock’n’roll, is gone. Those who dig his reet music are in mourning. For others, it is there to be discovered. Here at the ARChive of Contemporary Music, we honor his achievements.

Check out some of Big Jay’s recordings at Great 78 Project, hosted by the Internet Archive: