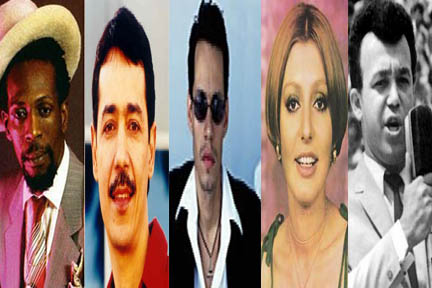 You know for over 25 years now I have been reading and jotting down all the wrong things I’ve discovered in the review and indexes and odd-numbered pages of music writings.  When I read that another favorite singer Gregory Isaacs had died, the Times obit carried one of those ‘it’s a stretch’ references, necessary throughout the world to make a foreign performer resonate in dominant culture.  Forced me to revisit my list, embedded in the lyrics, “Well they call me the great pre-tend-er.”

‘Cat Coore, the guitarist and cellist for the seminal reggae band Third
World, has called Mr. Isaacs “the Frank Sinatra of Jamaica” for his
elegant vocal phrasing. But as the singer’s friend and former manager
Don Hewitt observed, “It goes further than that, because Sinatra was
not a songwriter.” ’

So, it’s a faint whiff of Sinatra-essence that envelops the likes of Gregory, Eddie Santiago, Marc Anthony, Googoosh and Losif Kobzon.  Read it and reap – the benefits and pitfalls of needing a touchstone, or perhaps repositioning the stone that the builder refused…

• “Riley is to Cajun music what neo-traditionalist Dwight Yoakum is to country, what rebopper Wynton Marsalis is to jazz”.  –  ref Steve Riley.  Greg Cahill, The Pacific Sun, Mill Valley, CA, 9/29/1993.

• “In a field populated by characters full of braggadocio, Lion is the master of hyperbole, a veritable Jelly Roll Morton of calypso”.  –  Calypso Calaloo. University Press of Florida, by Donald R.  Hill, 1993. p. 106

• “Some called Selena, the 24 year old Tejano artist, the Latin Madonna – without the controversy…” – that was until her murder.”  –  …commenting on Selena being the first Latin artists to enter the Billboard charts at #1 and replacing Janet Jackson by having the fastest selling recording by a female ever,  CBS Sunday News, 7/30/95

• “I can’t believe this is the Brazilian Edith Piaf, the same husky-voiced supercharged torch singer I witnessed holding an audience in thrall for three nonstop hours at the Olympia in Paris.”  –  …about Maria Bethania.  Why Is This Country Dancing, p. 180

• “Conjunto legend Esteban Jordan has been called the Jimi Hendrix of the accordion.”  –  Claudia Perry, The Huston Post, 6/17/90

• “If Jordan is the the Hendrix of the accordion, Flaco Jimenez is its Charlie Parker for the rhythmic finesse and fluidity he brings to his own executions off traditional lines.”  –  Legends of the Accordion CD notes, 1995, John Morthland

• “She has been called the Bessie Smith of Egypt, and for stark passion she was all of that.”  –  …about Umm Kulthum. All Music Guide, John Storm Roberts, p. 855

• “The Haitian composer, Ludovic Lamothe, who has been called ‘The Black Chopin’…”  –  Music of Latin America, Slonimsky.  p. 210

• “…but not for simple hyperbole was he recently promoted in this country [England] as being ‘very different from other calypso stars’, the music’s Bob Marley.”  –  “The Soca Star” by Tony Herrington, the Wire, Issue 46/47, December 1987, p. 36

• “His familiarity with literary classics, his wide vocabulary, and his ability to improvise in song at a moment’s notice, led one writer to dub him ‘ the Shakespear of Calypso’.”  –  about Atilla the Hun.   Atilla’s Kaiso: A Short History of Calypso, from the foreword by Errol Hill, University of West Indies, 1983.

• “You could say that [Rudolph] Charles was to pan and to music in Trinidad what Churchill was to Britain during World War II”.  –  …about Soca star David Rudder in a Sire Records press release 4/88

• “…he displays some fancy footwork that could put MC Hammer in the shade.  He is none other than Superblue (Austin Lyons) the Hammer of Calypso”.  –  Carib Beat, August 1993, Glenda Cadogan. p. 17

• “His blunt anti-establishment lyrics have made him the bob Dylan and Mick Jagger of Africa.”  –  about Fela Kuti.  John Collins, African Pop Roots, p. 13

• “Odessa has been called the New Orleans of the Russian Empire”.  –  ‘Klesmer entry’, The Penguin Encyclopedia of Popular Music, Clarke, 1989. p. 664

• “The group was spotted while taking part in the famous Jamaican Peace Festival, Reggae music’s version of Woodstock”.  –  ref to Kingston’s One Love Peace Concert in 1978 in the Inner Circle press release from Big Beat Records, 3/93

•“Los Hermanas Padilla had continued to sing and record and also toured extensively throughout the 1940s, performing in Venezuela, Mexico, and New York, where they were known as the “Mexican Andrews Sisters.”  –  Barrio Rhythm, Steven Loza, 1993. p. 58.

• “The list of Miranda impersonators began with Ettel Bennett, built up as ‘the Yiddish Carmen Miranda’ for her show at the Old Romanian nightclub in New York’s Borsch Belt.”  –  Brazilian Bombshell, p. 59

• “That 70-year-old Kostadin Varmezov is the Ornette Coleman of the bagpipe”.  –  Richard Gehr, Village Voice, 1988

• “The Congolese writer Syvain Bemba called him the Balzac of African music, after the writer of the Comédie Humaine.”   –  …about guitar giant, Franco.  The Rough Guide, 1994, p. 317.

• “Nearly every southeast Asian country has its own version of Madonna or Michael Jackson : in Thailand it’s the vampy Honey and Jackson soundalike, Tik Shiro.”  –  …John Clewley,The Rough Guide, 1994, p. 441.

• “A gifted singer, composer and arranger, P.K. established himself in the mid-1980s and, despite being handicapped by blindness, soon won a devoted following in the country, becoming known as the Stevie Wonder of Zambia.”  –  …about P. K. Chisala, Ronnie Graham, Stern’s guide, Vol 2, p. 212-3.

• “During the seventies Nathan [Abshire] enjoyed great popularity with festival and college audiences; he was the Professor Longhair of Cajun music and they adored him.”  –  …South to Louisiana  : The Music of the Cajun Bayous, John Brovin, Pelican Publishing, 1983   p. 241

• “A 1930 ad in New York’s major Spanish Newspaper, La Prensa, for example, billed the popular Cuban singer Antonio Machín as “El Rudy Vallee Cubano,” that is, the Cuban Rudy Vallee.”  –  My Music Is My Flag by Ruth Glasser, U. of California Press, 1995, p. 7.

• “In France, Prince Diabate is known as the Jimi Hendrix of the Kora, because he plays behind his back and through his legs”.  –  Afropop Guinea program, NPR, approx. 5/9/92

• “Mahlathini and the Mahotella Queens with the Makgona Tshole Band.  Or, if you prefer, The Lion of Soweto, The Supremes of South Africa, and (literal translation) The Band That Knows Everything.”  –  NME 6/25/88, Gavin Martin

• “…it could be said that Nelson Zapata, the founder of Proyecto Uno, is the Chano Pozo of our time. Only where Pozo collaborated with Dizzy Gillespie, Zapata, a product of the Dominican migration, collaborated only with the two sides of himself.”  –  Alisa Valdes ,The Boston Globe, Feb. 28, 1996, vialatino@latinolink.com.

• “ Morales, who records for Majestic, has had better luck with his material.  Noro is an avid jazz fan, and would like to be known as the Latin Duke Ellington.  Actually he is closer to Fats Waller,…”  –  Salsiology – What Is Rhumba? by William Gottlieb, p. 26

• “The two-stringed rabbabah assaults the senses with ear-fluttering twills as the djallabiyah-dressed, handlebar-moustachioed trio – “Hendrix of the East” : Metqal Qenawi Metqal, Shamandi Tewfiq Metqal and Yussef ‘ali Bakash – sing of nomadic exploits and tales seemingly straight from the pages of ‘A Thousand and One Nights'”.  –  …about the pricipal performers in Les Musiciens Du Nil (Musician of the Nile) in the Realworld press kit for Charcoal Gypsies.

• “The album won him the dubious title “the African Leonard Cohen.”  –  …about Geoffrey Oryema and Exile album, Realword NET presskit.

• “Founded by Dama Zafimahaleo, they were at one stage known as the Beatles of Madagascar.”  –  …about the group Mahaleo, by Ronnie Graham, The World of African Music / Stern’s Guide, Vol 2, p. 176

• “One of the best players was the late, legendary Rakotozafy (the Robert Johnson of Madagascar)…  –  about the well known marovany player, Rough Guide  p. 364

• “He’s the Paul Simon of Jewish music.”  –  Alicia Svigals of the Klezmatics about Pearlman, interview by Mark Rubin, http://www.monsterbit.com/pcp/pcp39/klezmatics.html

• “If all rock music were klezmer, then Phish would probably be the Klezmatics. Or vice versa. (In either case, Phish would no longer suck.)”  –  Boston Phoenix on May 16, 1997, by Seth Rogovoy

• “Rachid el Baba…- he likens himself to an Algerian Jean Michel Jarre – built a studio in Tlemcen and began recording many of Rai’s top stars.”  –  about top rai producer Rachid by Martin Johnson, Pulse! “Do the Rai Thing” Nov, 1989, p. 50

• “… the famous Tunisian singer, Saliha (and if you are not yet familiar with this “Umm Kulthum of Tunisia,” find a recording of her soon) …”  –  Middle East Studies Association Bulletin, July 1995  by Dwight Reynolds

• “A kind of Arab Jim Morrison, he irritates and unsettles the authorities, at the same time seducing the masses and the intellectuals.”  –  …about Cheb Khaled, Intuition Records press kit, 8/89

• “Mapfumo, with his luxuriant dreadlocks, his moral authority, and his chimurenga sound, was touted internationally as the Bob Marley of Zimbabwe.”  –  …about Thomas Mapfumo.   The Boston Phoenix, 3/18/88, by Banning Eyre

• “Musically, at any rate, it seemed a fitting start for a band that would go on to become South Africa’s answer to the Mills Brothers and the Ink Spots.”  –  …about the Manhattan Brothers.  S&M, African Rock  p. 193

• “From Bandundu, Zaire, Rochereau literally became the voice of African rumba or, as a newspaper in Kinshasa called him, ‘The Muhammad Ali of Song.'”  –  …about Tabu Ley Rochereau, Jack Kolkmeyer, Reggae & African Beat,          12/84

• “Googoosh is Barbara Streisand, Elvis, Madonna and Frank Sinatra rolled into one.”  –  Like Holding My Pillow, By Termeh Rassi, July 31, 2000, The Iranian

• “He is Losif Kobzon, Russia’s Frank Sinatra, for decades the favored crooner of Russian TV and variety shows, and for decades both the friend of the powerful and a power player in his own right.”  – April 25, 2002 Moscow Journal, The Smoothest Soviet Crooner, Still in Good Voice By Alison Smale via Yuri Kozyrev for The New York Times.

• “Maloya, a ritual music that has Indian elements alongside the creole, is (to use a cliché) Réunion’s blues…”  –  booklet, RoughGuide CD, Indian Ocean

• “Cui Jian, China’s John Lennon, sings prophetically about the confusion and dissatisfaction of the nation’s youth.”  –  PR for film, No More Disguises, 1989, on the First Run/Icarus Films website.

• “The Brazilian Bob Dylan covers Nirvana, David Byrne, and other cool cats on this beautiful album of English-language standards.”  –  … about Caetano Veloso’s CD, A Foreign Sound, in “The Must List”, 5/7/04, Entertainment Weekly, p.55

• “Depending on the tune, Ms. Pipoyan can sound like an Eastern answer to Edith Piaf or Joni Mitchell.”  –  …about Armenian singer, Lilit Pipoyan.  “Timely Hymns to a Timeless City” by MELINE TOUMANI, NYTimes, March 7, 2004

• “The particular instrument Brady uses – built for him by Elliot “Ellie” Mannette, the Stradivari of West Indian steel instruments – is the only one of its kind in the world…”  –  Nat Hentoff liner notes for Victor Brady LP,   Classical Soul  (Inner City, USA, 1006, 1976).

“Kazem al Sahir is The Iraqi Elvis . Here he is singing ‘We Want Peace’ with Lenny Kravitz” –   http://growabrain.typepad.com/growabrain/music_from_the_middle_east/,  7/24/2004

• “For devotees of North African music, Hakim needs no introductions, but he received several anyway, with fanfare befitting a star nicknamed the Lion of Egypt, at Central Park SummerStage on Saturday. He was called the “king of shaabi music,” referring to his rhythmic street pop.” –  “Enter Egyptian Pop Star, Blowing Kisses and Swiveling Hips: Hakim in Central Park” by Sia Michel, NYTimes – July 10, 2006

• “Carmen Pateña, dubbed the “Shirley Bassey of the Philippines” is expected to bring back memories with such songs as…”  –  Via – http://www.mukamo.com/golden-divas-at-the-music-museum/

• “Famed for their live appearances and Sophie’s on-stage pyrotechnics (one critic dubbed her ‘the Keith Richards of the violin’)…”  –  re Sophie Solomon, Decca Music website, UK http://www.deccaclassics.com/artists/solomon/biog.html

If you’ve read this far you may also be interested in other biblical references (stone…refused) in Reggae lyrics I discovered quite by accident when working on this @ http://homepage.ntlworld.com/davebulow/wow/index.htm

Another digression: According to ASCAP Sinatra wrote more than a dozen songs, and if nothing else he added the line, “A-number-one.” to the Kander and Ebb classic, “New York New York.”