Our fearless leader here at the ARC, known affectionately as B., often prowls rural flea markets, combing the stalls for unique and/or interesting sound recordings. The recent Fourth of July weekend was no exception, as B. returned with an armful of 12-inch discs.

Among them were three LPs of note: “Low Down Blues” by Champion Jack Dupree (Continental CLP-16002), a compilation entitled “Rhythm and Blues” on the UK Decca label, and “Sweet Swingin’ Stuff” by Stuff Smith. 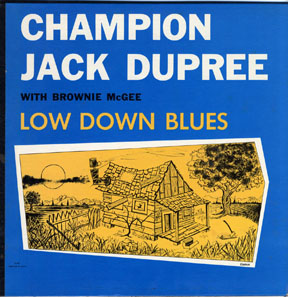 The Champion Jack album is of note because it collates the songs from his three 78s on the Continental label in one place. Dupree, as we all know, was one of the finest blues pianists of all time, New Orleans born and bred. He had a LONG career, recording as early as 1940 and even made a couple fine albums in 1990 and 1991 before he died in 1992. In the liner notes to the album at hand, the clearly un-informed writer states that singer Dupree is accompanied by “a regrettably anonymous but very excellent blues piano player.” The writer also forgets to note the bass player, Count Edmonson, according to several discographies. The guitarist Brownie McGhee is duly noted; indeed, he is listed on the album cover but his name is misspelled. The session is a fine one, recorded in 1945, it harkens back to the classic, pre-war piano-guitar duet that was so popular during the Thirties. The version of Leroy Car & Scrapper Blackwell’s “How Long How Long Blues” accentuates that concept.

Side two of the album is much more mysterious, noted as by “Sonnie and Lonnie.” The writer states that Lonnie is Lonnie Johnson, a pianist who is not to be confused with the more famous legendary guitarist with the exact same name. Further information regarding Sonnie is not presented. According to some discographies, this is Teddy “Sonny Boy” Smith (one of the lesser known blues “Sonny Boys”). According to others he is listed only as “A. Smith.” A second guitarist, Sam Bradley, is not even noted by the writer. These six sides were also once issued on Continental 78s and, as the Champion Jack material, were presented here for the first time on a 33 1/3 RPM microgroove LP, manufactured probably around 1961, with a high quality, semi-laminate gatefold cover.

The cover is worth noting because, upon opening it, the first page is nearly blank, save for “technical data” small print on the bottom; the second page contains the track listing and the briefest of credits, plus the almost-helpful liner notes. Turn the page and there are TWO entirely blank pages. Couldn’t Continental Records come up with some photos of Dupree or McGhee (who were both still alive in 1961) or at least more accurate and complete notes about the sessions?

But the music is great, and the album is worth seeking. 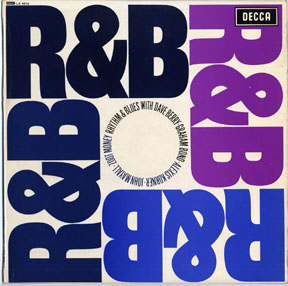 “Rhythm and Blues” is a collection of British blues and R&B recordings from the early sixties. When discussing British blues, it is occasionally said that the English cannot play the blues.

This argument is pretty much shattered by the compilation at hand. These acts—Dave Berry, The Graham Bond ORGANisation, Alexis Korner’s Blues Incorporated, John Mayall and the Blues Breakers and Zoot Money’s Big Roll Band—are all fine proponents of the style. True, two of Berry’s three tracks are slightly pop-oriented, but his version of Bo Diddley’s “Diddley Daddy” is good. Instead of turning it into a haul-ass romp as most Brits did with blues material during the Sixties, he kept Bo Diddley’s lopping tempo and spiffed it up with odd guitar breaks.

It’s true that Britain never produced a singer with the vocal power of Howlin’ Wolf—and unfortunately John Mayall’s two songs here exemplify that fact. However, Mayall’s songs are likable and one cannot doubt his sincerity when he sings a tribute to Elmore James who had recently passed when “Mr. James” was written.

The bands of Zoot Money and Alexis Korner (known as the “Founding Father of British Blues”) turn in recordings (two each) that can be considered archetypal, pre-Rolling Stones/Yardbirds/Animals-style British R&B. The album contains five tracks by the Graham Bond ORGANisation and these are the best of the lot. Bond’s organ-driven combo stomps through the given material with a lot of enthusiasm and little reverence, the way it should be no matter where you come from!

British Blues may not be authentic blues in the strictest sense, but it is an original style of playing the blues, and therefore authentic—especially when performed by these guys.

This album has historical value of course, because many of the big classic rock stars produced by England learned their trade playing in these bands. Eric Clapton and members of Fleetwood Mac played with Mayall (though after these recordings); Ginger Baker and Jack Bruce are on the Bond and Korner tracks; Charlie Watts also played with Korner at one time; Jimmy Page and John Paul Jones recorded with Dave Berry (though not on these tracks); Zoot Money influenced Eric Burdon, etc. 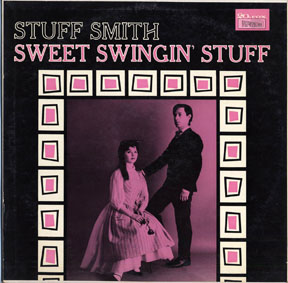 The story on the Stuff Smith album is all about the cover—a photo of an extremely square-looking white couple used to market an LP of jazz made by African American men! Granted, “jazz violin” may not be the hippest thing under the sun, but the way Stuff Smith played it, it was pretty close. There is no way that the art director for this cover even listened to the music; and quite possibly did not know the title, either: “Sweet Swingin’ Stuff.” Nothing about this cover swings, but the music sure does!
(B note : my cost $2)