Staying in NYC for the weekend for this and that, for both of them, saw and heard some very nice performances by Khaira (or Haira) Arby and Laurie Anderson. 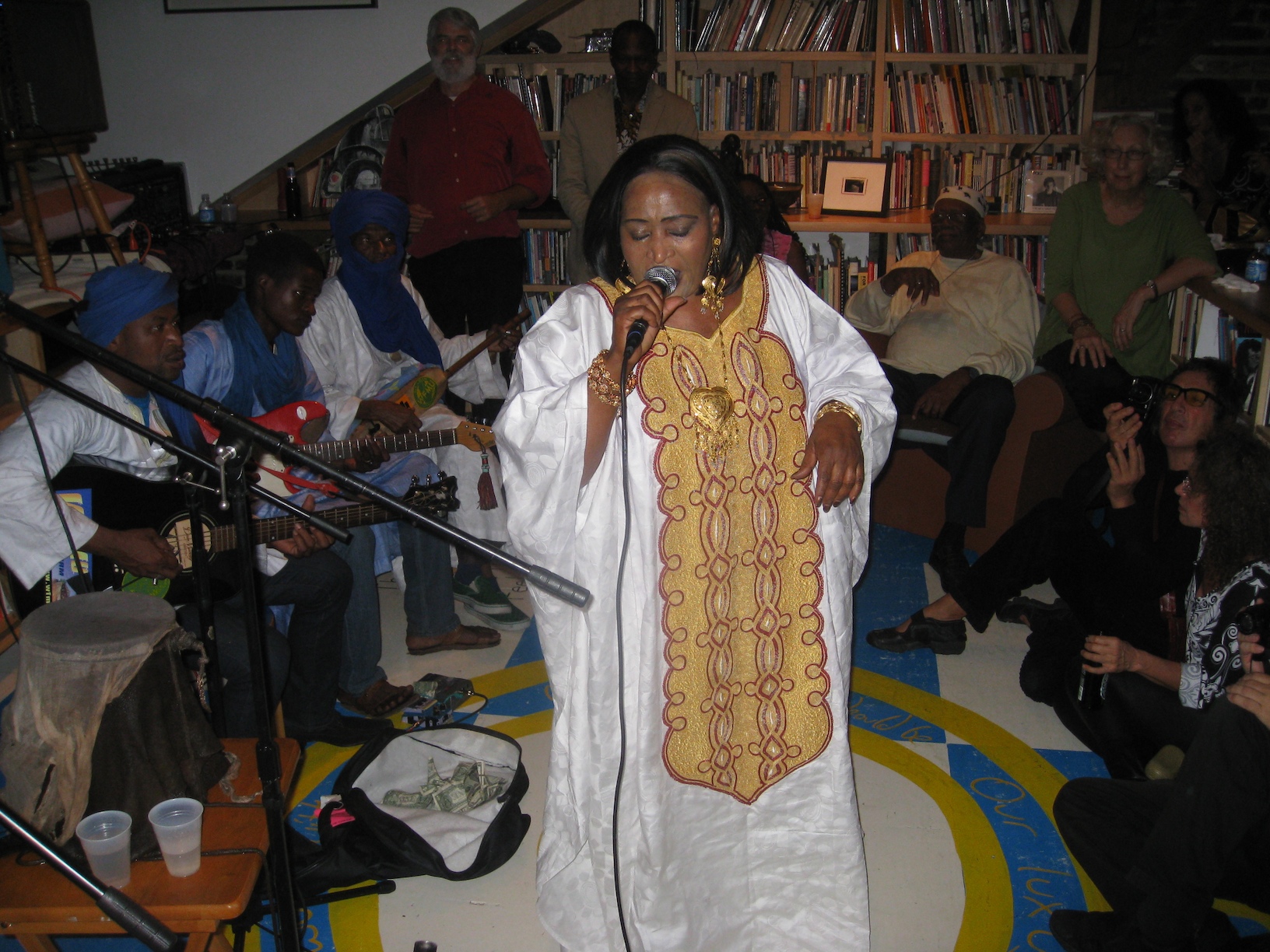 On Saturday Khaira , ‘The Nightingale of the North,” aka, “The Aretha Franklin of Mali“ was playing a houseparty on the now nightlife-friendly Bowery.  Her North is the desert region of Mali, north of Timbuktu; the temp would make it the south in most countries, just about on a straight line with Jamaica.  The style is being marketed as ‘desert blues’ (she’s a cousin of Ali Farka Touré) and ‘duskcore,’ (think desert, not jungle or techno), but let’s say it fits in with the more established Songhai tradition (named for the Renaissance era African empire, village based, griot, largely secular, Islamic influenced, high tessitura praise singing) tweaked by monumental psych electric guitar runs from 17 year old Abdramane Touré.   One thing I noticed, and something I have seldom seen, is that for two plus hours no one in the band tapped their feet to the beat, any beat.  It just flowed.  So the voice is keening, soaring, evocative, the structure circular, haunting, hypnotic…but the guitar, but the guitar.

Here’s your dashing (means showing appreciation with cash in much of West Africa, not an attribute) author, reduced to singles in these hard times. 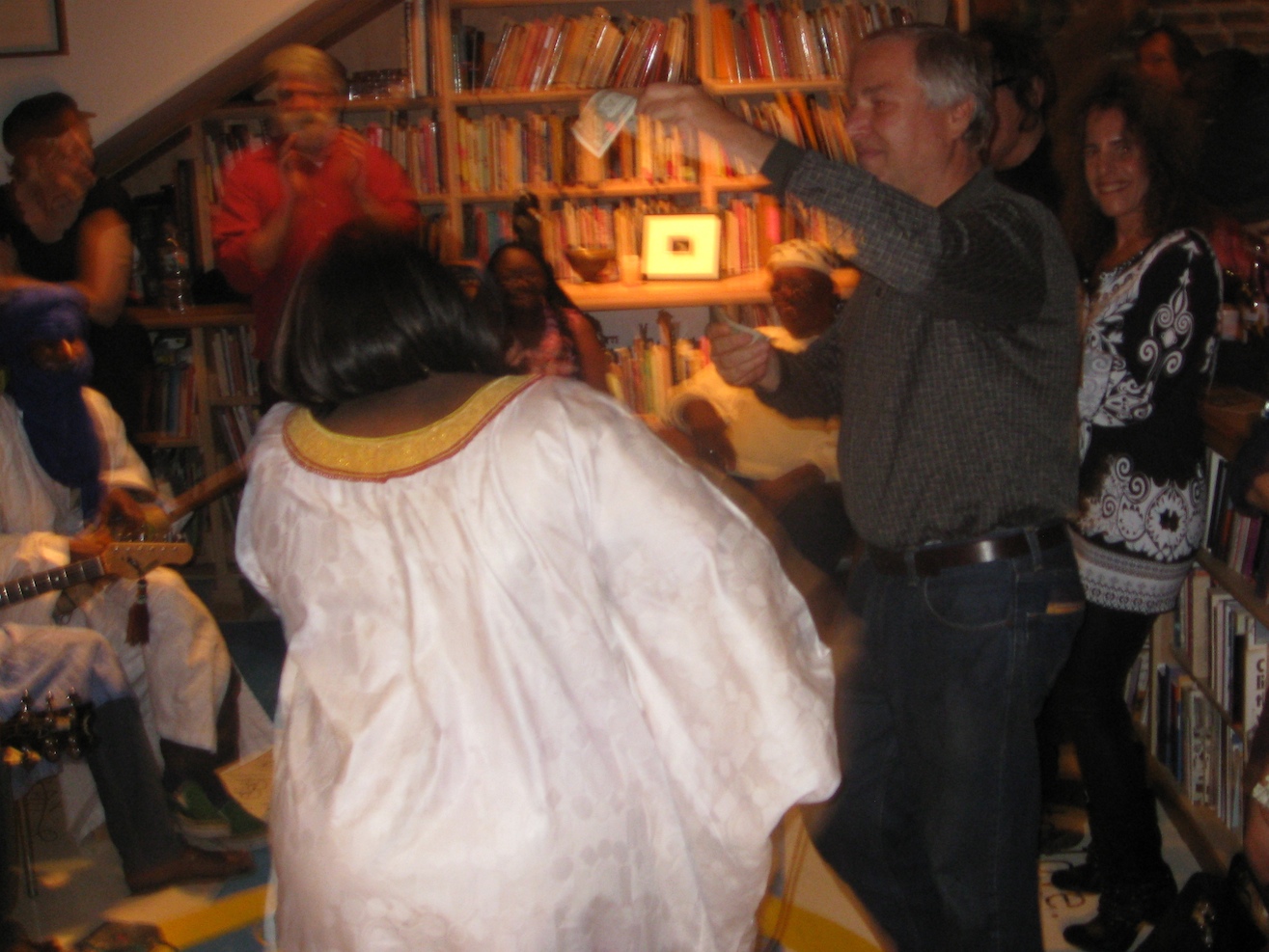 Like a lot of musicians in this world Khaira hopes her reception on her first US tour, and readily available music, will allow let her leave her day-job, as a salt trader along the old caravan routes.

It was a privilege to hear such a high quality performance in such an intimate space, the entire band smokin’ (but the guitar…).  I guess that’s why we live here, or in Timbuktu.

Here’s the discography I’ve been able to track down.  Cassette-player-less?  Get a copy of here first CD avail stateside.  I’ve never heard any of these, but did I mention I loved the guitar work I heard live?

This just in : a note from Clermont says they are looking to release all of the cassettes on CD in the future. 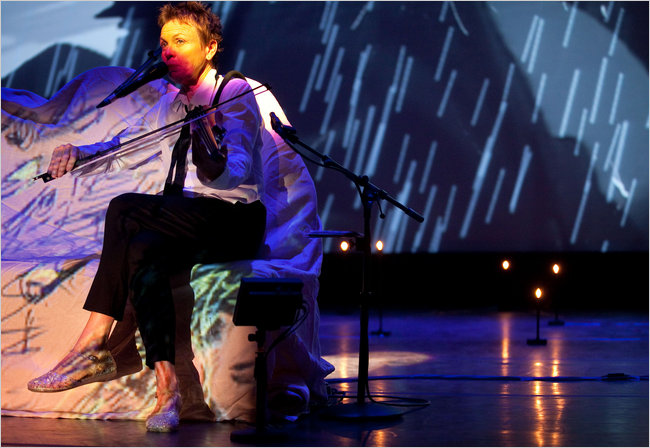 Now Laurie Anderson is also from the North (Illinois, Ireland, Sweden) and has brought her urban griot vision full circle, from the playful wondering of the early days to looking back and wondering why.  Her latest (Delusions) at BAM was majestic, the visuals not as striking as I wanted them (sheets of rain best), and the music better than ever (able accompaniment by Eyvind Kang on violin and Colin Stetson, sax.).   It was stories, non sequiturs, space-lore, snippets piled high, that by the end of the show are both zero sum and fully loaded, and you have no idea how she did it.

Her latest release is Homeland on Nonesuch Records.  For those of you who don’t know, I released LA’s first single, ‘O Superman,’ back when NYC was full of making, not the curatorial place holder it is now.   Nice to see her wearing my skinny ska tie I gave her in the 70s.

As both performers referenced their ancestors and offered unfamiliar nods to the Divine,  an e-mail that only came in today, addressed to “the Whole World,” seems to tie the skinny all together. 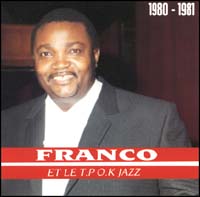 have the great honour and pleasure to announce to the whole world that The Lord God, has today,

MAY GOD BE GLORIFIED. AMEN.