Yep, the craic was good and the tunes were flying this week at the annual Irish Arts Week in East Durham New York. We were only able to manage a last gap weekend visit, but seeing friends and playing in some nice sessions made the trip worthwhile.

We arrived late on Friday, and immediately popped around to all the interesting looking sessions.  Crowded…difficult.  We eventually linked up with Don Meade, and enjoyed some tunes and beer with him at McGrath’s until about 4:00 am, by which time it seemed that my head couldn’t have hit the pillow fast enough!

Up late on Saturday and headed over to the fairgrounds for the big concert.  A great afternoon of festival madness. Although the pavillion sets were heavily attended and clearly the primary draw, I much preferred being at the smaller sets in the tent.  It was nice to see some familiar and many entirely new faces on the smaller stage doing their thing, but the highlight for me (seeing as how I’m a tenor player) was hearing Angelina Carberry and Martin Quinn perform: 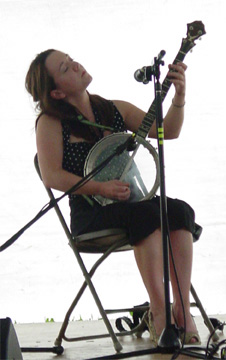 Angelina’s a wonderful banjoist whose playing I greatly admire, and I was glad to hear her in person.  Her and Martin’s set just flew by.

Later that evening, we went to John and Suzanne’s house party for some tunes and “hospitality” (beer and hot dogs).  I was one among many who had a great time; I even came away with a couple of really nice tunes from John, a great flute player from Carmel, NY.  Later, we went to Furlongs for some tunes and beer, and then, all the way over to Stack’s where Mike Rafferty was holding court for a small but appreciative crowd of luminaries (Tim, Brian, Gearoid, Ben, Sean, etc) and sundry.  He was brilliant, as were the tunes and the beer.

We didn’t tuck in until after 4:00am, but it’s not like I had planned to be anywhere on time this morning anyway.  If not for tunes and beer, isn’t that what Sundays are about?

* BTW, Tim (concertina) and Brian (uilleann pipes) have a spectacular new album out called Reed Only.  This is what it sounds like.  Great stuff!