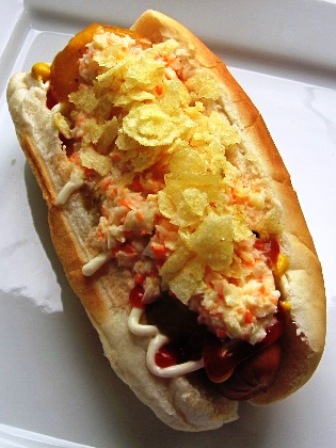 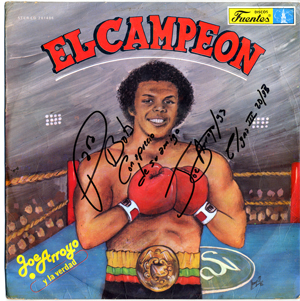 The city of Cartagena de Indias, lies on the upper west coast of Colombia, a bit above Panama, 12° off the equator.  You’ve read about Cartagena in Gabriel Garcia Marquez’s, “Love in the Time of Cholera”, and you almost saw the city in, “Romancing the Stone”, but it was so much easier to film in Puerto Rico.  The twelve foot thick coral walls build around this fortress-city made it a valuable port in the Colonial past, a haven for Spanish pirates.  When they yell those movie yells, “Make for the Spanish Main, me Hearty’s”, this is the place -the mainland coast of New Spain.  The most common dish served here is fish, almost always fried.  It seems that nearly everything people eat is fried.  I’m convinced Colombians will not rest till they’ve perfected agua frito.  So it took a few visits and many plates of chicharrones before I discovered the dog.

Like our big city hot dog the Colombian perro (dog) is street food, the noontime snack of busy office workers, students and the budget-challenged.  Like vendors worldwide the carts ply the streets and stake out territory.  To attract a clientele and explore their creative side the owners often cover their carts with lavish decorations.  Designs can involve cut metal work, tabloid paintings illustrating folklore, dachshunds, or layers of plastic flowers over painted ones.  My favorite vendor operated in front of the city’s largest movie house, combining cinemascope with a local seascape by inserting an aquarium in the center of the cart.  But the best perro, the perro of my dreams, the perro that has led to perro parties of disbelief in upstate New York, was from a very plain metal cart working above the 17th c. seawalls.  Imagine: first a lumpy white bread bun is sliced and a boiled piece of dubious meat attached.  “What do I want on it”?  “Todo”, I reply. “Round the world and drag it through the garden” as we used to say in the Midwest when we meant, “everything”.  Then the expected mustard is applied, the surprising ketchup added, the incredulous mayonnaise plopped on.  A lid flips up to reveal hot sautéed onions.  Another flip and cold chopped pineapple is spooned out.  The real topper is a bin containing potato chips.  The vendor takes them in his hands, rubs briskly back and forth, then presents his masterpiece covered in a fine chip spritz.  Main dish, side dish, fruit cup all in one daring Caribbean package.  Try it at home sometime. 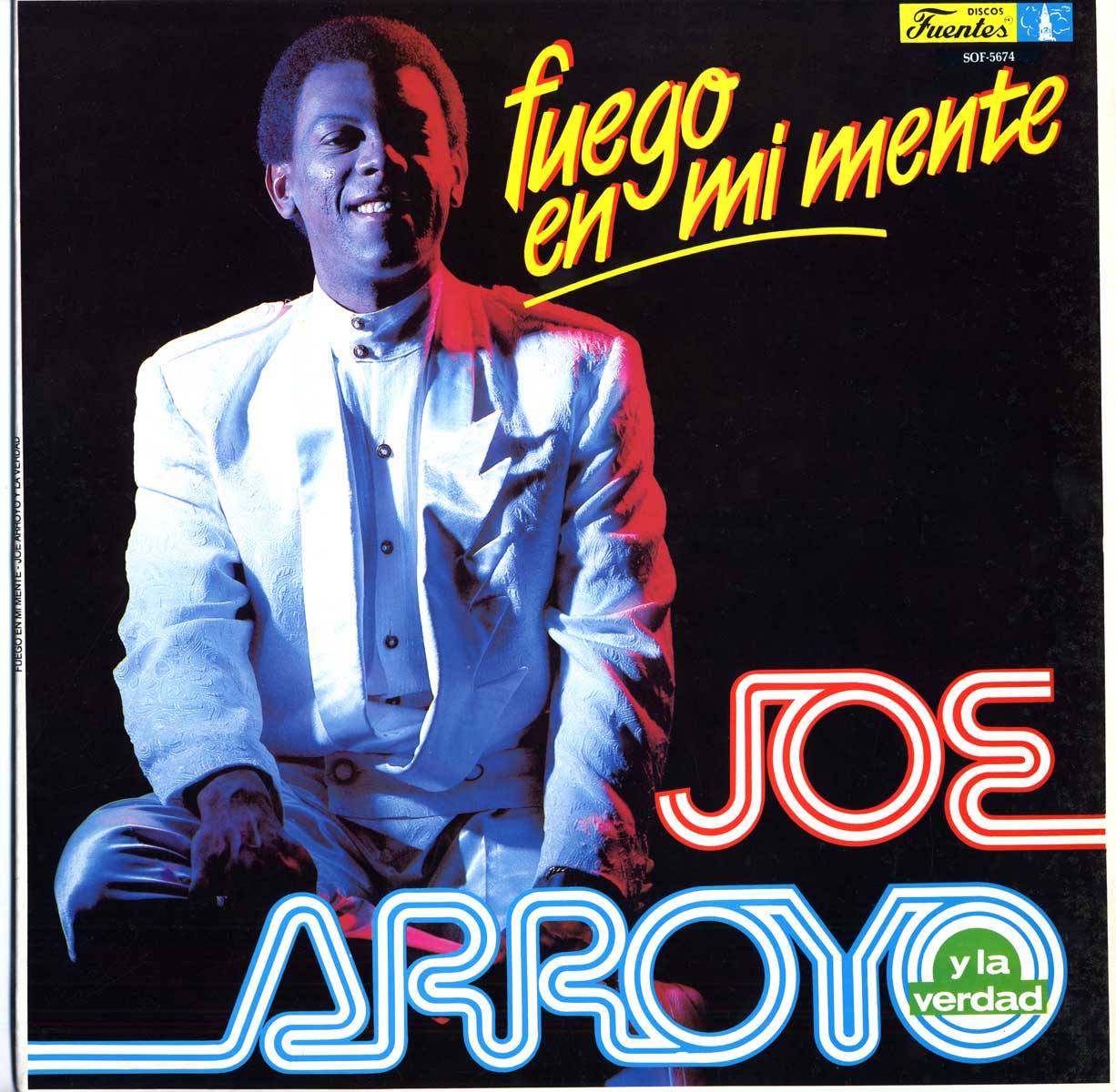 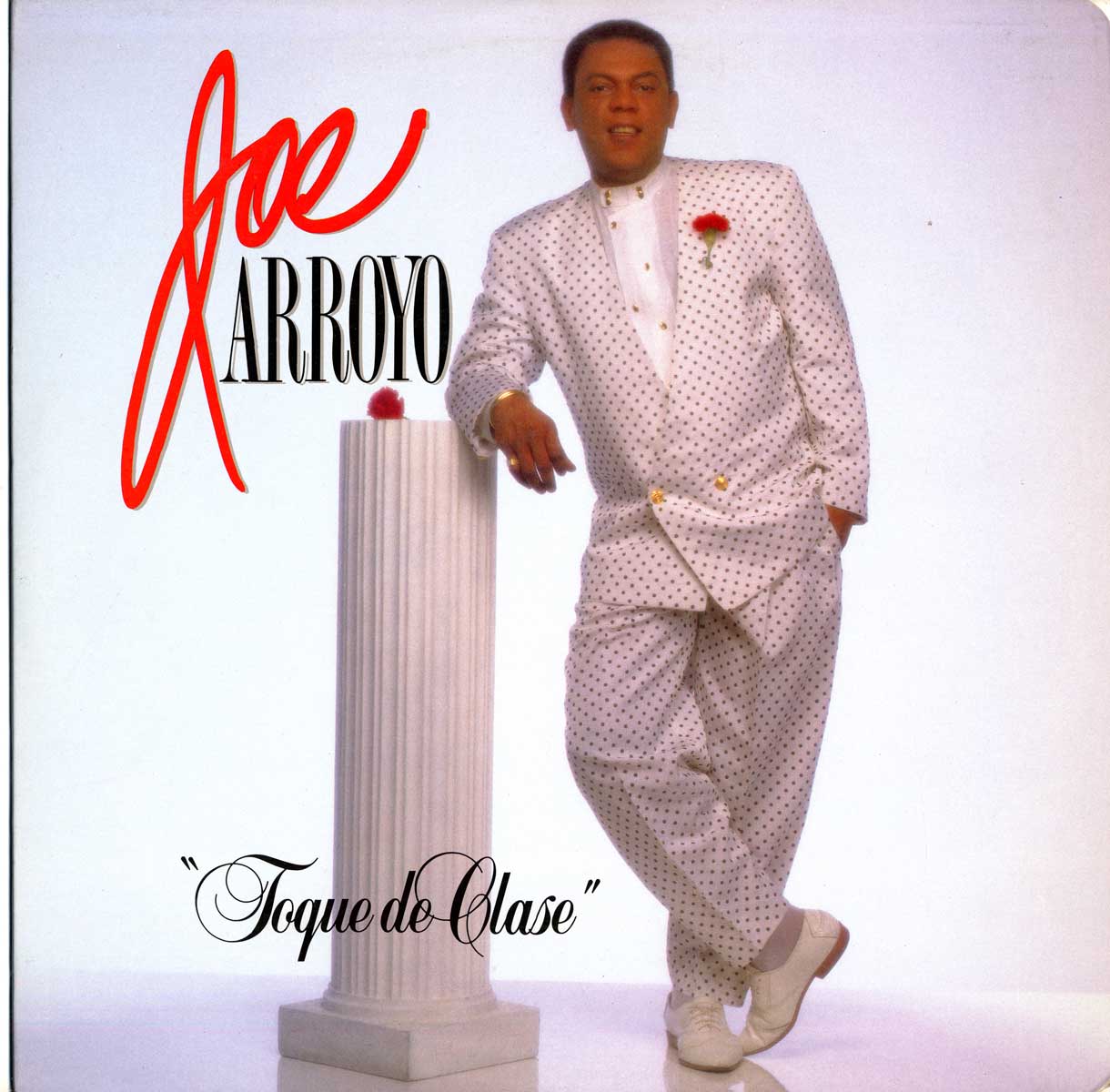 Alvaro Jose “Joe” Arroyo González, one of Colombia’s best vocalists and band leaders, died July 26, 2011. He was maybe 55, but had a long history of hospitalizations, for a variety of health problems.  I met him a few times in the 80s-early 90s when I was visiting Colombia often to collect records.  My preference has always been for Colombian salsa and his shows were always great.  Here is a profile I wrote in 1993, after a nice chat.  B.

Joe Arroyo is Colombia’s best known artist with a life as turbulent as the Caribbean coast where he was born.  One of forty children by the same father, including two brothers by his natural mother Angela González, Joe was raised by his grandmother until he was 10 in Cartagena’s dirt-poor barrio Nariño.  As a child he began singing to get attention and to pass the time while waiting in line to draw water at the local well.  He cites his earliest influences as the overly dramatic Spanish singer Raphael, and the African based rhythms of the numerous female street vendors from Palenque, a hilltop maroon community peopled by the descendants of runaway slaves.

His professional life began when the eight year old sang a lead in a New Year’s pageant at Santo Domingo Catholic School.  Local pianist and band leader “Mincho” Anaya thought enough of his talents, and the novelty of his age, to book him as a lounge singer at the Hotel Americano.  Soon another local, the great clarinetist Michi Sarmiento, asked Joe to join his band that worked the red light district.  Only ten, Joe went to live in a communal house peopled by other musicians in Galapa, near Barranquilla.  Here he sang with Johnny Arzusa’s band, an artist who would later join Joe as one of his backup singers.  By the time he was twelve Joe was expelled from school, vowed he had attended his last mass, and became the darling of prostitutes, “rumberos” and the colorful characters of the demi-monde.  Other groups Joe performed with in his formative years include Sincelejo and La Heroica Band.  Discovered in the late 60s by Fruko, a scout and music director for recording giant Discos Fuentes, Joe left the coast for Medellin with no clear guarantees.  For the next ten or so years he sang with the already popular salsa band Fruko y Sus Tesos, which Joe helped turn into a legend, and the Latin Brothers, another Fruko band driven by an upfront violin and trombone sound.

In 1981 Joe formed his first orchestra, La Verdad (the Truth).  When voiced in a questioning manner “verdad” can also mean, “Oh really?” , the doubting response Joe suffered when he bragged of the band he would one day create.  Soon Verdad was Colombia’s biggest draw and Joe wore the name like a badge.  Along with success came a growing drug habit and in 1983 he fell into a week long coma.  With the whole country buzzing with rumors of his death, Joe suddenly recovered.  Within a month he recorded some of his biggest hits “Rebelion” and “Mi Dios Todo Se Lo Debo” (I Owe It All To God).  Joe attributed his resurection to the Saints and the Archbishop of Colombia genuflected to cumbia, allowing “Mi Dios” to be sung in churches throughout the country.

In 1990, as he was about to earn his seventh Congo de Oro in a row at the annual Barranquilla Festival, they renamed his the “Super Congo de Oro”, indicating the there really was no competition for Colombian music’s most prestigious award.  With a voice that lingers in the upper registers, Joe sounds more like Celia Cruz than any salsero.  He often voices strings of percussive onomonapeadic syllables mimicking or playing scat counterpoint to the basic rhythm.  Other Latin jazz elements abound, and are especially evident in the piano solos and the horn lines that make most New York and San Juan brass sections seem robotic- all the more remarkable since Joe composes and arranges by ear.

Joe delights in layering diverse musical forms such as cumbia, Cuban son, and jazz over a salsa bedrock, then finding a catchy name for the hybrid.  These include cumbión , an alloy formed of cumbia and salsa or guaguancó, son caribeños  for a similar admixture having a strong pan-Caribbean influence, notably soca and zouk with hints of merengue and reggae, and joeson, the version with unmistakable African roots.  Never satisfied with a straight ahead salsa, Arroyo’s incorporation of costeño genres is less a gimmick than the logical outgrowth of growing up with the diverse musical styles common to Colombia’s Caribbean shore.  Testimony to this free flowing interchange and common roots was his performance at 1993’s Festival del Caribe in Cartagena. Without rehearsal and in quick succession, he sang and traded improvisational verses with three bands he had never heard play: Haiti’s Rara Machine, the Zairian group Loketo, and Cuba’s Union Sanluiserena.

1991 was a year of great triumph and tragedy.  In the middle of a tour celebrating his 20th anniversary in the recording industry, robbers broke into Joe’s home in Barranquilla tied him up and pistol whipped him.  Later that year, during the annual Barranquilla carnival, the men were found murdered in the street.  Whether it was God’s will, old druglord connections, or a brother in F2 (a powerful secret police force), their death caused Joe to lie low for a while to avoid familial retribution.  Part of this sensible exile included a visit to the States where he signed worldwide with Sony Discos, producing his first LP for them, Un Toque de Clase.  The album featured a plea bargain in song, “Inocente,”  a unique way of explaining his non-role in the recent deaths that made the song a must hear in Colombia.  By mid ‘92 he was back home as popular as ever.  Many artists are legends, but few have written their history so large in their own country as Joe Arroyo.  His survival, both physically and musically, seem a series of miraculous re-entries to the world, and his fans freely grant him a measure of other worldly powers.