As you know, we live in the least developed country of the so-called developed nations. I write this from the San Francisco airport. I fly domestically, maybe, twice a year. I fly internationally 4 or 5 times a year. I have NEVER had a flight delayed in Europe or Asia, and I have never once, in 10 years, taken off on time in the USA. And UNITED is the worst. Everytime. Two hours delay so far and counting. And I hate them.

BUT, if you are lucky enough to loose your mind at the United Domestic Terminal, there is a wonderful Exhibit of Catalinaware – pottery made in the Arts and Craft / Art Deco style on that tourist isle, from about 1927. This is the ONLY accredited art museum in an American airport. And certainly you have the hours to wile away if you fly United. (who I hate).

The Catalina Collector’s Blog < http://catalinacollectors.org/blog/gallery > says this is the largest exhibition of the material every mounted. So why talk about this in a music blog that hates United Airlines?

Well because of the photo of that gal a-playin’ her flower pots! They are playing ‘tuneful pottery’ in 1932 on the “Island of Romance.” And that’s about all I know. 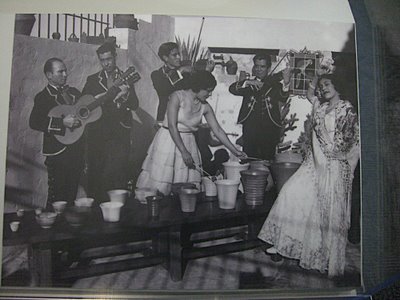 So the hunt begins to find out more.

There is also another exhibition titled, “30th Anniversary San Francisco Ethnic Dance Festival” in another terminal but no one seems to know where that terminal is, and it seems missing from the airport map at the United Terminal, and did I mention I hate United?