In my capacity as Head Archivist, I am often asked to go out into the field in order to pick up donations for the ARChive. On July 13, two of those donations were picked up, with the aid of semi-official van driver Keith Streng and, for the second pickup, two of our strong young interns, Felix and George.

The first was in deep Brooklyn, a neighborhood known as Gravesend. According to his widow, Liz, Vincent Scognamillo was a lover of all kinds of music. His collection was fairly well organized, especially the 45s (more than 6,000 of them), all in boxes and were in mostly great condition. Although the collection includes recordings of pop, rock’n’roll, jazz, blues, C&W, big band and vocalists, and it ranged from the forties through the eighties, the collection consisted chiefly of doo wop: LPs and 45s. This would not be surprising, since the pickup location was just around the corner from Rhythm Records. For more than 30 years, Rhythm Records was a key Brooklyn doo wop shop, but it recently closed up. Liz said Vincent made Rhythm Records a second home. However, Vincent was not a hard-core record collector. His collection did not consist of very many rare first pressings. Most of the 45s are later pressings, bootlegs (common during the seventies with doo wop collectors), and reissues. The LPs are almost all reissues and compilations. But it is all great stuff and it neatly fits into what we do at the ARChive.

Don’t have time, at the moment, to go through all the 45s, but I examined a box marked “M,” and here are a few finds: 8 Blues 45s, including Jimmy McCracklin, Little Milton and Big Maybelle; 7 by The Moonglows; 5 by Mickey & Sylvia; Pop, country, rock’n’roll were all accounted for and the recordings ranged from the thirties (Glenn Miller’s “In the Mood”) to the eighties (Madonna’s “Gambler”). PLUS: a look into another box unveiled more than a dozen Little Richard 45s on Specialty!

After Keith and I dropped off the collection, we picked up two interns and some boxes and drove out to north Queens. The pickup location was literally in the shadow of the Whitestone Bridge. The collection was accumulated by the father and (I think) uncle of Mark Bradburn. It consisted of about 5,000 45s, 400 LPs and over a thousand 78s, including nearly a hundred 12” 78s. Apparently, the elder Mr. Bradburn was in the jukebox business. Some of the 45s were in good shape and most likely from his own collection, others had jukebox wear and tear. The LPs—some fine old jazz & mambo records among them—were in fairly good shape, except for some molding from having been in the basement (or probably the garage) for so long. The bulk of the 78s were in really good shape, very playable with beautiful labels. Along with the common crooners and big band stuff you find in nearly every 78s collection, there were some fine jump blues (6 by Wynonie Harris!), swing (Lester Young), bebop (Charlie Parker on Dial) and lots of mambo! The main portion of the 78s were in alphabetical order and each in green, card-stock sleeves. Obviously, the 78s were very important to the owner.

Did either of the collections have anything in common? Probably a bunch of stuff in the 45s—both collections were rather eclectic—but we haven’t had a chance to digest that. In the LPs, the Brooklyn collection had 4 LPs by The 50 Guitars of Tommy Garrett and the Queens collection had another. The music on these records is mostly middle of the road instrumental fluff, but I like these albums because they have die-cut covers. 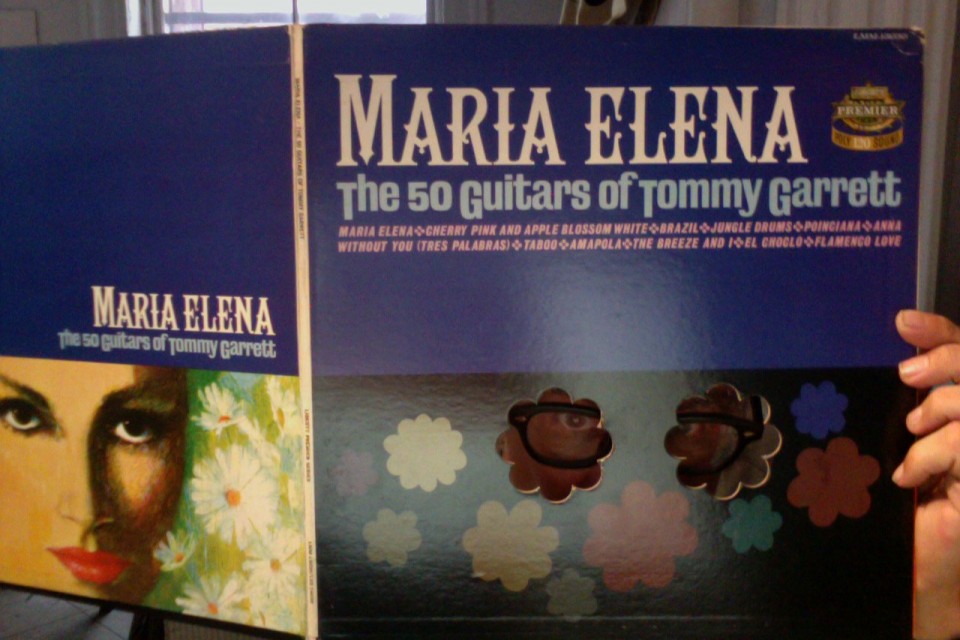 Also, both collections had Your Twist Party by Chubby Checker—containing both “The Twist” and “Let’s Twist Again” as well as Chubby’s great version of “Whole Lotta Shakin’ Goin’ On.” After that, the LPs diverged quite a bit.

Here are some photo highlights: 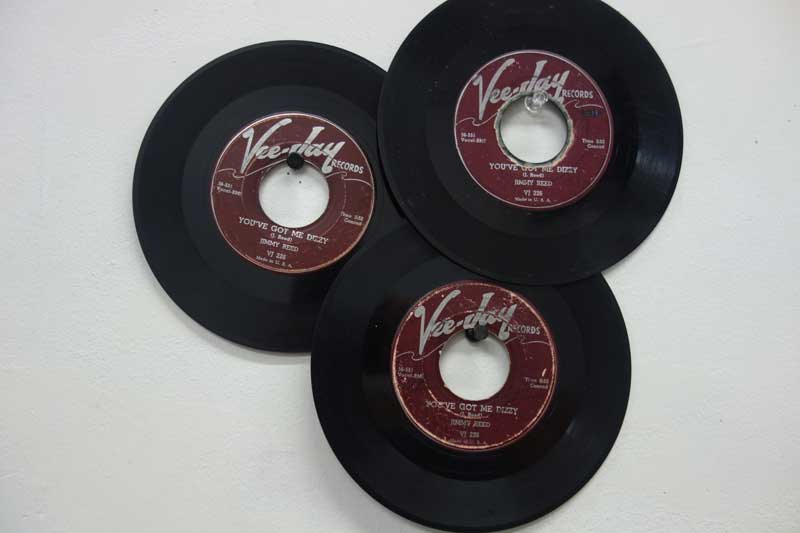 Three copies of “You Got Me Dizzy” by Jimmy Reed! 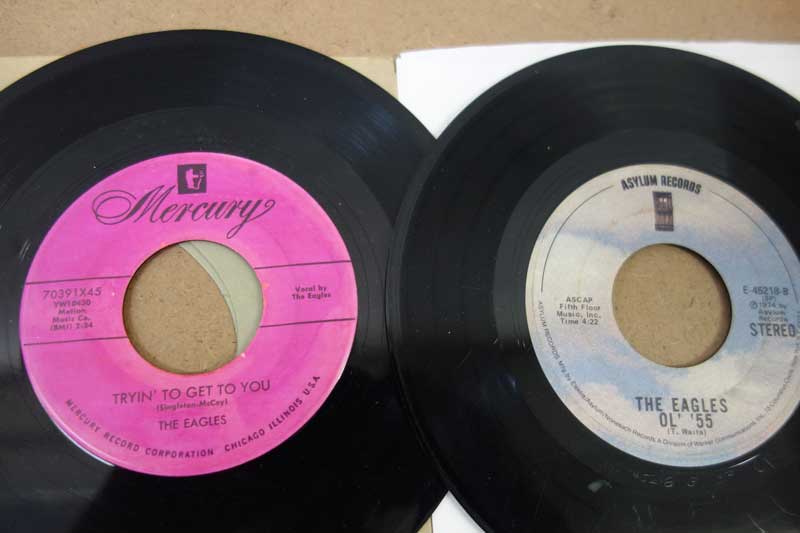 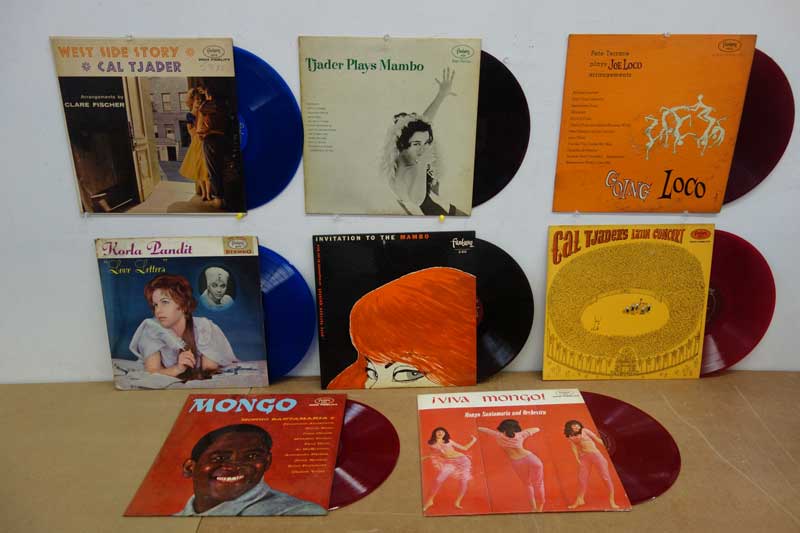 Eight Mambo LPs on colored vinyl (the dark ones in the middle are actually very dark red). 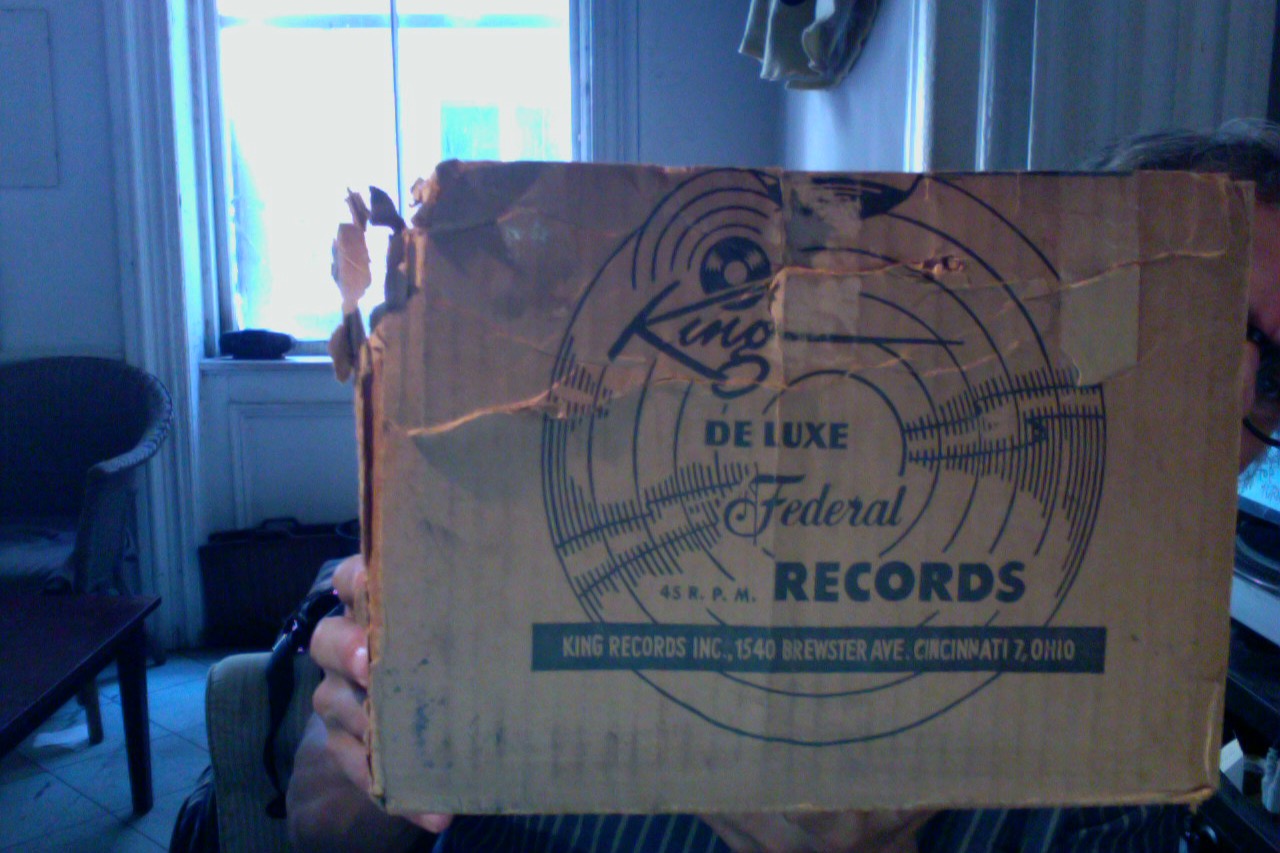 A box that once contained about a hundred unplayed records from the legendary King/Deluxe/Federal label! 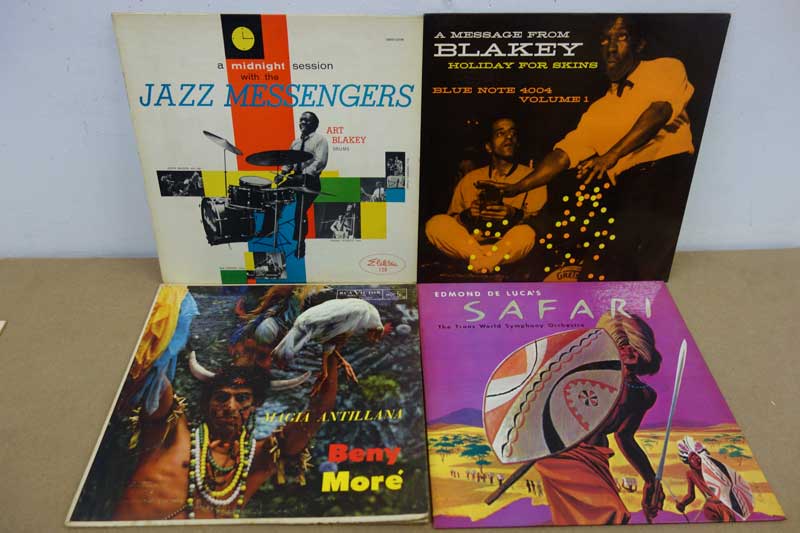